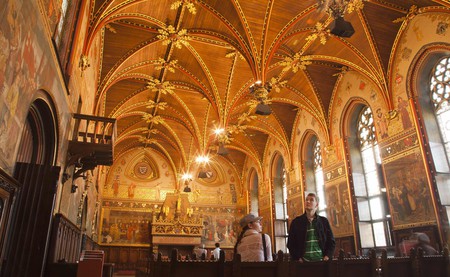 When it comes to brick or Brabantine Gothic, architectural movements that flourished in Northern Europe in the Middle Ages, the idyllic Belgian city of Bruges paints a comprehensive picture. Its UNESCO-listed old town core, having mostly slept through the Industrial Revolution, is still rich with well-preserved authentic gems in this style, as well as plenty of its 19th-century disciples. We take you on a tour of the most characterful Gothic buildings in Bruges.

Basilica of the Holy Blood

Eye-catching because of its flamboyant Renaissance façade and at the same time tucked away in one corner of the Burg Square, the Basilica of the Holy Blood actually consists of two very different chapels. While the lower is Romanesque and modest in appearance, the dazzling upper chapel equals full-on Gothic extravagance. It is here, amid splendid colours, ornate altars and religiously themed art, that Bruges’ most precious relic is brought out for lengthy veneration twice a day. The crystal vial with a stained piece of cloth in it is believed to hold the blood of Jesus Christ, brought back from the Second Crusade by the Count of Flanders in the 12th century.

Already confirming that Bruges has Gothic landmarks galore, the Basilica of the Holy Blood’s neighbour to the left is City Hall, one of the oldest town halls of the Lower Countries. Its eggshell façade boasts statuettes of Flanders’ counts and countesses, ornate little arches, and a general lavishness that has made it an excellent example of the late Gothic style also known to awe beholders of Leuven’s and Brussels’ mayoral seats. Inside resides a shining star in the neo-Gothic department: the polychrome vaulted ceiling of the ‘Gothic Hall’, an exquisite room that includes historic murals to daydream about, painted in the Romantic 19th century. This particular gem came from the mind of city architect and noted Gothic revivalist Louis Delacenserie, who played a major role in returning Bruges to its former Gothic glory as the end of the 19th century approached.

Master of the Bruges skyline and former regulator of town life thanks to its impressive bell collection (once described by poet Henry Wadsworth Longfellow as ‘a heart of iron beating in the ancient tower’), the Belfry sits on the Markt. Originally built in the 13th century but consumed by fire and lightning no less than three times, it sits atop the old market hall, which is why locals also know it by the name ‘Halletoren’. Conquering its narrow, 366-step staircase has become somewhat of a badge of honour among travellers. While waiting to climb all the way to its octagonal lantern tower of sand-lime brick in High Gothic style, the tower’s survivor story can be soaked up in its reception area. 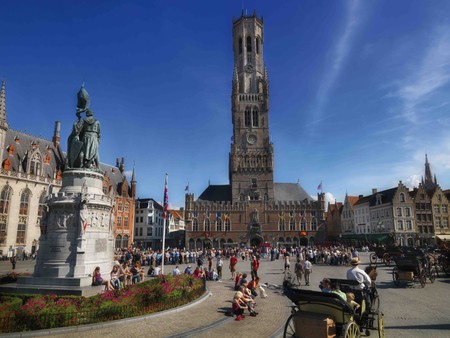 Reaching to the sky for over 122 metres (400 feet), the Church of Our Lady’s spire qualifies as the largest brickwork tower in the world. It’s widely seen as the testament to the excellence of Bruges’ artisan stonemasons, partly thanks to its tasteful mix of the evolving Gothic styles – a necessity given the two centuries it took to erect the religious abode. A central nave, built in 1225, features Tournai stone in the Scheldt style, while the choirs and portals were constructed using the later, popular French and Brabantine variants. Add to that the only Michelangelo statue that ever left Italy during the artist’s lifetime (a Madonna and Child in white Carrara marble), the tombstones of Mary of Burgundy and her father Charles the Bold with beautiful bronze effigies, and paintings by local Flemish primitives such as Pieter Poubus and Gerard David, and you’ve got a beautiful Gothic frame with a grand art inner sanctum. 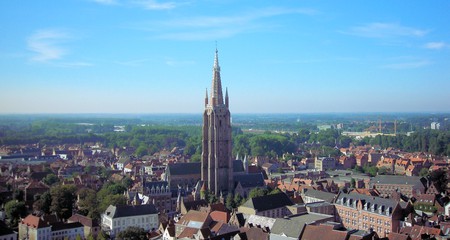 This splendid city palace just behind the Church of Our Lady spent a surprising stint as a pawn shop. It was a peculiar period between its original role as the home to the rich and powerful Lords of Gruuthuse, a family that thrived in the merchant town thanks to its control over the wheat trade, and its current status as a city museum. Currently closed for extensive restorations but aiming to reopen by 2018, the palace holds an eclectic selection of applied and decorative arts. On its prior refurbishment, which rounded up in 1898, it was again Louis Delacenserie who took the lead, and this building too received a certain neo-Gothic flair in the process. 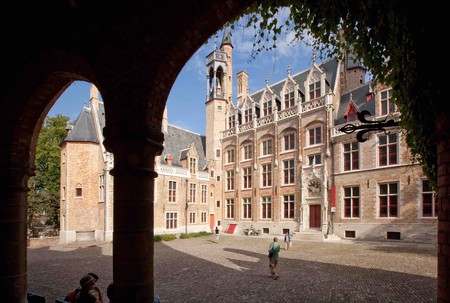 In the same category of legendary hubs of power and wealth, we find the early 15th-century ‘Poortersloge’, or Burgher’s Lodge. The corner building in the commercial heart of town was erected in the late Gothic style and occupied by society’s most prominent members. Known as ‘poorters’ and including the influential Society of the White Bear, they’re remembered to this day by the presence of their mascot in an alcove on the left corner of the front façade – a serious-looking bear proudly carrying a coat of arms. The construction’s unusual but elegant tower is the most striking part of the romantic Jan van Eyck Square and, thus, a fitting headquarters for the city’s high-ranking merchants and politicians to hobnob and receive international trading partners. Next door, the step-gabled tollhouse in the same Gothic jacket complemented their operations perfectly. 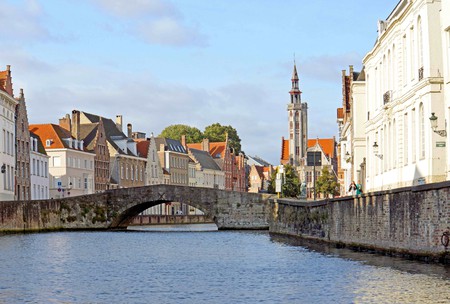 To end the tour on a gastronomic note without straying from the Gothic path, bistro ‘t Zwart Huis, a three-minute walk from the Burgher’s Lodge, serves escargots du Bourgogne and other hearty dishes behind a 1482 façade in Tournai limestone. The protected monument’s banqueting hall is cosily lit, with its original hearths still intact.

Check out the map below to plan your day of seeing Bruges’ splendid Gothic sights.