These Are The Most Colourful Streets in the World 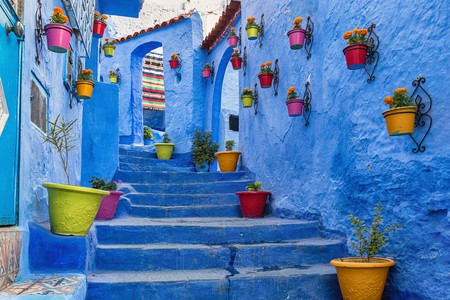 What is life without a bit of colour, and these streets from around the world are more than just colourful, they are vibrant examples of how people engage with their urban environments, enlivening them with visually-engaging murals and transforming them into works of art. 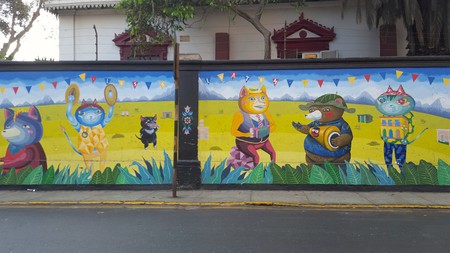 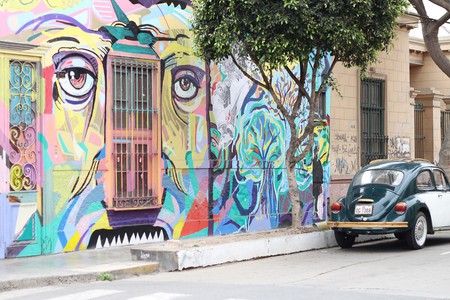 The ‘Walls Speak’ initiative has been running since 2015, inviting graffiti and street artists to paint designated walls in the Barranco district of Lima. Calle 28 de Julio has brightly coloured, imaginative murals that vary in subject and style, making it a journey into another world.

Nicknamed ‘Rainbow Village’, the southern Indonesian village got a much-needed makeover by the local council committee after Slamet Widodo, a teacher came up with the idea to reinvigorate the village after seeing other places that were successfully revamped through artistic interventions. Now tourists flock to see the vividly painted houses, which also boast unique pieces of art, from angel wings to trompe-l’œil animals. 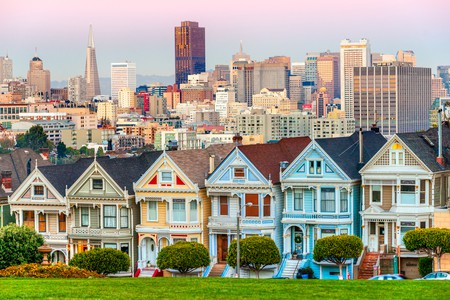 There are numerous brightly painted Victorian and Edwardian houses throughout America, but it’s the San Francisco houses for which the term ‘Painted Ladies’ was coined. You’ll see the most resplendent examples in Haight-Ashbury at 710–720 Steiner Street. Built in the late 1880s, this group of ‘Painted Ladies’ are a real tourist attraction and have featured in movies, TV shows and ad campaigns. 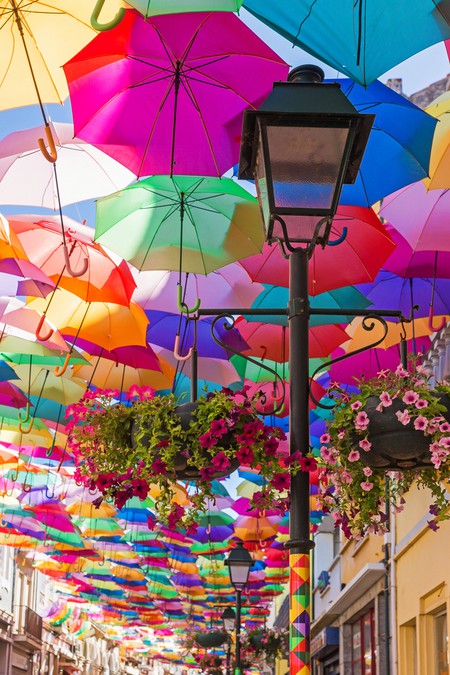 Wanting to bring colour to the grey spaces of the Portuguese town, the Umbrella Sky Project showers several streets, including R. Luís de Camões, with a colourful glow from a host of suspended umbrellas. What started as part of the AgitÁgueda Art Festival, now returns every year to provide shade during the warm summer months. But aside from the practicalities, this outdoor installation by Sextafeira really captures our imagination and transforms the streets into fantastical spaces. 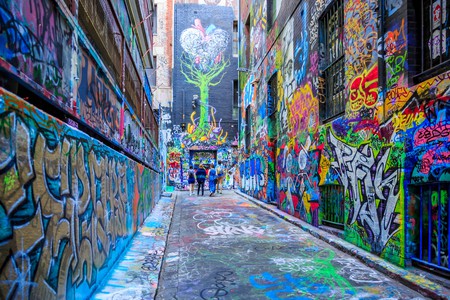 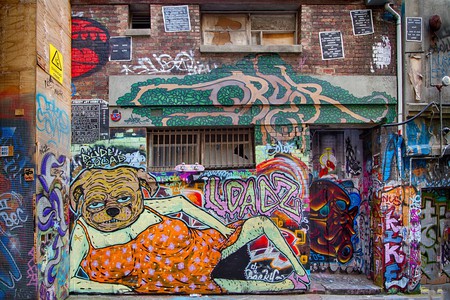 The bluestone laneway has put Melbourne on the street art map. Here, local and international artists have covered the brickwork with a cornucopia of vibrant murals, stencils and paste-ups, creating an ever-changing urban landscape that attracts art lovers all year round.

Street artist Axe Colours has been leaving his spectrum-filled portrait murals all across Barcelona. From his depictions of artists like Dalí and Frida Kahlo to TV characters like Walter White, Axe Colours portrayals are tributes to important contemporary figures. On one particular Barcelona street corner you’ll find his brilliant take on the lead characters from Game of Thrones. 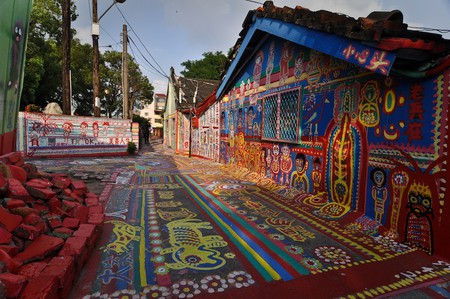 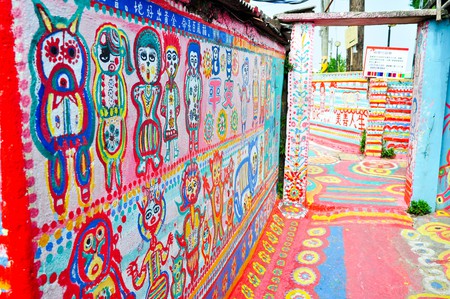 The original Rainbow Village is the creation of former soldier, Huang Yung-Fu who began painting the houses in his village to save them from demolition. The self-taught artist gives the idea of regeneration an entirely new meaning and since his handy work was discovered by students, the village has been preserved and transformed into a cultural destination for all art-loving travellers.

Open 24-hours, the longest free gallery in Europe is on part of the last remaining segment of the Berlin Wall. Since the 1990s, a number of artists – including Thierry Noir and Jim Avignon (who is also one of the artists featured in Peru’s Barranco district) – have left their mark on this important piece of history as a symbol of freedom. Over the years the wall has had to undergo restoration and remains one of the most photographed attractions in Berlin. 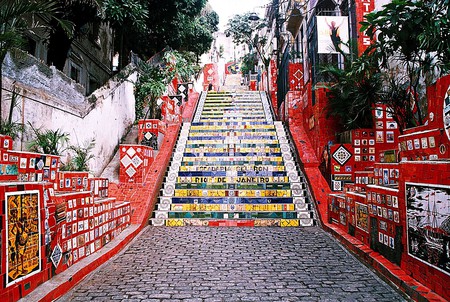 In the Lapa neighbourhood of Rio, Jorge Selarón worked on his tile creation for more than 20 years. This labour of love incorporates all manner of materials as well as tiles donated by people all over the world who were captivated by this truly inspired gift to the city. It gives a whole new meaning to public art and now serves as a beautiful memorial to the artist who created it. 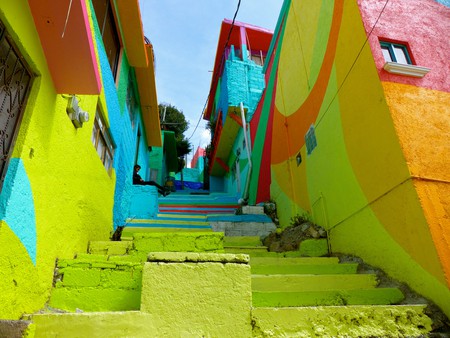 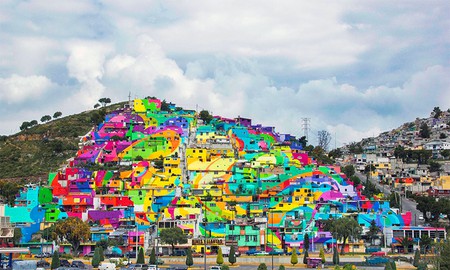 A group of muralists and street artists, German Crew, completely transformed the hillside town of Palmitas in 2015 into a mind-blowing swathe of colourful hues. But it’s when you get into the warren of streets that the immersive work really comes alive, as every surface has been painted in electric colour patterns and murals. 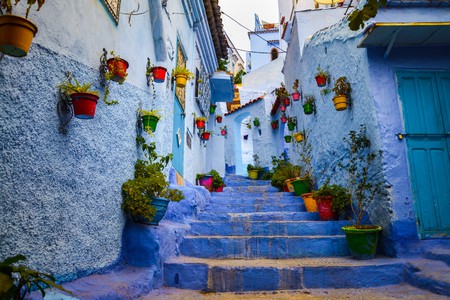 Like Jodhpur in India, Chefchaouen is a vision in blue. There are many theories as to why the Moroccan town is painted in varying shades of this one colour. But the actual reason is that the city became home to a large population of Jews fleeing Spain in 1492, who brought the tradition of painting houses blue to mimic the sky and heavens, to remind them of God. For over 500 years the city has kept this beautiful tradition alive, so we can experience both a significant historical event and its legacy. 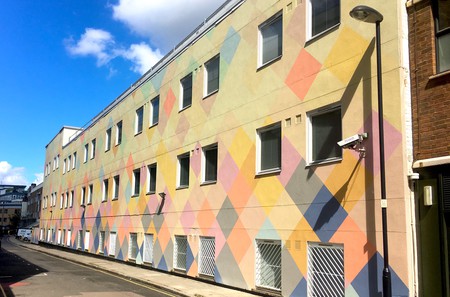 Forget the candy-floss-coloured houses of Chelsea, Kentish Town and Camden – not to mention the plethora of amazing street art in London. A new street in Angel is claiming the ‘most colourful’ trophy, and Instagrammers are going crazy for it. Along the back wall of Liberty Hall (private student accommodation) on City Garden Row, the prettiest pastel mural breathes a new lease of life into this residential street. 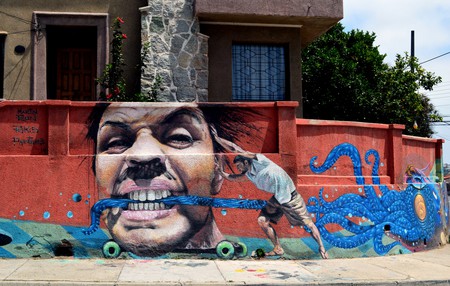 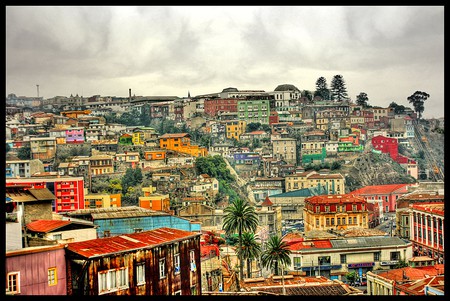 The Nobel Prize-winning poet Pablo Neruda had a home in Valparaíso. The city, fondly referred to by locals as ‘Valpo’, is also famous for its abundance of stunning street art. Throughout the pretty-coloured hillside port town, which was named a UNESCO World Heritage site in 2003, you can explore a huge array of murals. Areas like Cerro Polanco, Cerro Cárcel and particularly Templeman Street in Cerro Alegre boast some of the best in the city.

Want to see more colourful art? Then You Need to Check Out These Pink Artworks