How to Survive an Armenian Wedding 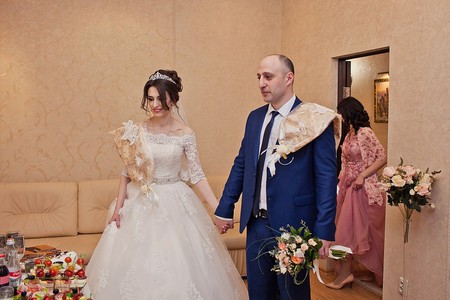 Armenians are known for their faithful commitment to certain customs and traditions. As such, weddings here are joyous and formal occasions filled with well-preserved traditions. Historically, the celebration lasted for a week, but this has now changed. Here’s what you need to know to survive your first Armenian wedding.

On the wedding day, guests are usually divided into two wedding groups: one at the groom’s home and the other at the bride’s. There is often a band playing traditional music at the groom’s and others dancing and singing. Historically, there would also be a red and green ribbon ceremony during which a crown of green, red, and white ribbons (symbolizing life, peace, and sacrifice) is made to later be placed on the couple’s heads during the wedding ceremony. Today, it’s more common that the groom wears red and green ribbons on his suit to symbolize sacrifice and life, respectively. Others believe the tradition symbolizes happiness and health and is a way to wish a new joyful life to the newlyweds.

Meanwhile, the bride’s parents house will have been decorated with a variety of wedding ornaments, and the table is full of food and dessert. Before the ceremony starts, the bride’s brother or close cousin will put money in her shoes as a symbol of good luck, and then he helps her put them on her feet. The bride might also write the names of her single female friends on the bottom of her shoes, and as each gets married, the bride is meant to cross off their names.

The groom’s side then makes their way to the bride’s house, all the while dancing and singing. They bring a basket filled with perfume, shoes, makeup, a veil, and anything else the bride might need for the special day. 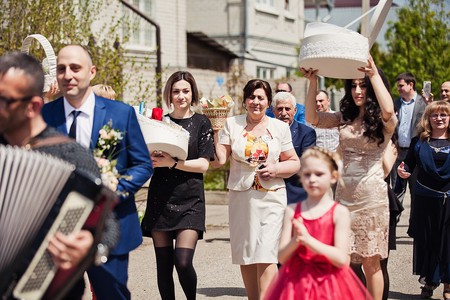 Armenian weddings include a church ceremony that lasts about an hour. The priest blesses the couple who then exchange rings as a symbol of unity. Then, the priest will place a crown on the couple’s heads to symbolize their little kingdom. The crowns are made of precious metals and are an integral part of Orthodox Church weddings that can be seen in Georgia, Russia, Greece, Albania, Serbia, and elsewhere. The crowns are owned by the church and should be given back for use in other church wedding ceremonies. 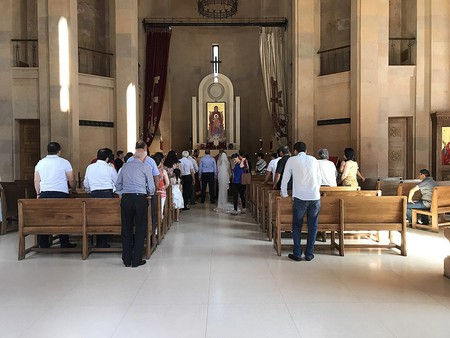 The tradition of welcoming the bride and groom

After the church ceremony, the bride and groom drive to the groom’s parents’ house or to a restaurant for dinner and further celebrations. The groom’s mother places a plate at the entrance for the couple to break upon entering for good luck. She then welcomes her new daughter by putting lavash (traditional Armenian bread) on the newlywed’s shoulders and inviting them to eat honey, which symbolizes happiness. 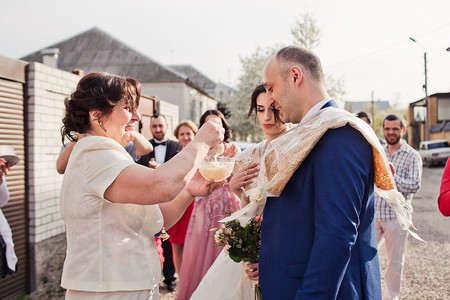 Eating a spoon of honey for happiness | © Кертог / WikiCommons

Receiving presents is always exciting—especially on your wedding day. Usually, the godfather brings the most expensive gift. Others might bring different jewelry, money, or household goods.

An Armenian wedding reception is quite big and full of food, drinks, songs, and dancing. Guests should be prepared to eat a lot, listen to many toasts to the newlyweds, and to participate in some traditional dances with the rest of the guests.