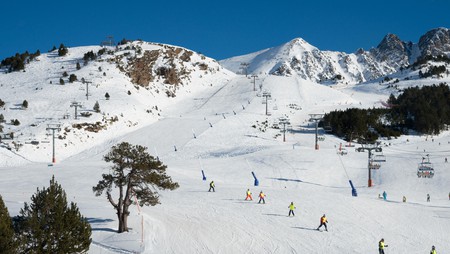 Hidden in the Pyrenees mountain range between Spain and France is the tiny principality of Andorra. It is home to Grandvalira, the largest ski area in the Pyrenees. Prepare to explore this haven for skiers and snowboarders using our handy guide.

Find the border between Spain and France on a map, trace your finger along it, and you’ll find Andorra, tucked in the high mountains of the Pyrenees. It is home to Grandvalira, the largest ski area in the Pyrenees; this includes the ski resorts Soldeu, El Tarter, Pas de la Casa, Grau Roig, Canillo and Encamp. It is 172km (107mi) from Toulouse and 200km (124mi) from Barcelona.

What kind of ski area is Grandvalira?

Compared to the Alps, Grandvalira is a small ski area. However, with 210km (130mi) of pistes, it rivals the big French resorts in skiable terrain. Andorra is known for its sunshine, but there are snow-sure slopes thanks to the high altitude in Soldeu (2,580m/8,465ft) and Pas de la Casa (2,050m/6,725ft). The area is also known for being affordable, quiet and family-friendly.

Beginners and advanced skiers are catered for in equal measures, with 63 easy green and blue runs, and 60 red and black runs. Pas de la Casa has slightly steeper slopes and mostly red runs, while Soldeu has more variety for beginners, with plenty of greens and blues; plus, it’s the centre of the valley. Grau Roig is much quieter, so it’s worth considering during peak holiday weeks.

What other features will I find there?

Those who like hitting the snowpark should head to El Tarter for rails, boxes and mega jumps. Freestyle camps and international-level competitions regularly take place here.

Beyond the slopes, there is so much you can try in Grandvalira, including cross-country skiing, snow tubing, igloo building, husky sledding and snowshoe trekking. Advanced skiers should definitely take advantage of the reasonably priced heli-skiing on offer in Andorra. Get dropped at the top of a mountain and ride through the untouched powder.

Can I take lessons?

Yes, there are six ski and snowboard schools in Grandvalira, one in each ski resort. Lessons aren’t just for beginners. It’s a great way to be guided around a new ski area. There are freestyle lessons for those who want to learn to hit jumps, plus freeride introductory sessions if you’re interested in exploring off-piste.

Can I rent ski equipment?

How much do lift passes cost?

What are the accommodation options?

While Airbnb is increasingly popular, there are a number of hotels in the region. You can stay at any of the six resorts. Pas de la Casa is one of the most popular places to stay, with plenty of lively bars and restaurants, while Soldeu attracts a slightly quieter, older crowd.

Budget travellers should try the cool Secret Spot Hostel in Pas de la Casa. For a mid-range hotel, check out Hotel del Tarter – cosy and five minutes from the lifts. If you really want to splash the cash, book into Sport Hotel Hermitage & Spa in Soldeu, one of the most luxurious hotels in the region, with a top spa and the highest nine-hole golf course in Europe.

Grandvalira is 176km (109mi) from Carcassonne airport, 172km (107mi) from Toulouse and 200km (124mi) from Barcelona. It is easiest to reach by hiring a car, but you can also get a bus from these destinations. Trains are possible from the French side; the nearest train station is L’Hospitalet-près-l’Andorre, where a shuttle bus operates in winter to Pas de la Casa.

And for little ones?

Grandvalira is incredibly family-friendly. Head to the Mon(t) Magic Family Park in Canillo, where kids can build igloos and snowmen. The Bababoom Circus in El Tarter has fun obstacles to help improve your child’s skiing ability. Alternatively, sign them up to the Snake Gliss, a tobogganing train that goes down the pistes after the lifts have shut.

Off the slopes, there is a zipline, ice skating at the Palau de Gel and a snow groomer ride for children aged 12 and older.