Why You Should Visit Osaka, According to the People Who Live There 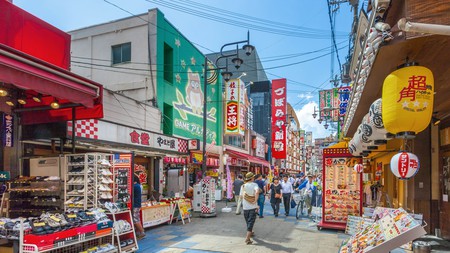 Osaka offers some of the best food, culture and nightlife in Japan | © simonlong / Getty Images

With both retro charm and modern flair, Osaka is a captivating city that offers some of the best food, culture and nightlife in Japan. Culture Trip spoke to people who live and work in Osaka for their take on what makes it such a great place to visit.

Tourists often pass through Osaka, using it as a transfer city to the region’s other major hubs rather than a destination in itself. However, Osaka has some of the most vibrant culture in all of Japan, and a diverse range of things to see and do, from excellent shopping, delicious food and lush parks to any number of entertainment options. In particular, its energetic nightlife sets Osaka apart from neighbouring cities, such as Kyoto and Nara, both of which make for excellent day trips. At once an urban jungle sparkling with neon lights and a welcoming town filled with friendly people, Osaka both embodies and defies stereotypes of Japan.

You’ll never get bored in Osaka

“It has everything you are looking for in a big city: clubs, bars, shows, shopping, museums, attractions… there is never not something to do,” says Mike O’Rourke, owner and chef at The Silver Lining, an izakaya (Japanese-style pub) that serves craft beer and American food not far from Umeda Station in Osaka.

Indeed, music lovers visiting Japan will find that they don’t have to go all the way to Tokyo to get their fix: major venues such as Zepp Namba and Umeda’s Billboard Live Osaka host international bands and singers throughout the year, while smaller clubs like Circus in Amemura showcase DJs from around the world. The Summer Sonic music festival, held in Osaka every August, delivers with big headliners. 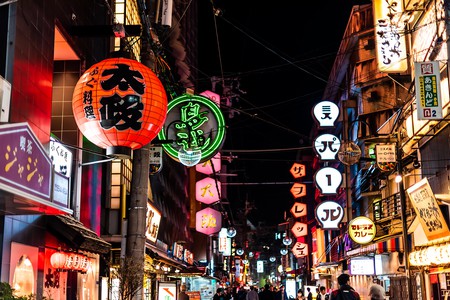 The city has a flourishing LGBTQ scene

Doyamacho, a neighbourhood just east of Umeda, is home to Japan’s largest group of gay bars and clubs outside of Tokyo. Explore the narrow streets and don’t forget to look up: a lot of buildings look like offices, but are actually crammed with small bars stacked on top of one another. Osaka even has its own drag house, The Haus of Kinki, which performs at bar The Sound Garden in Dotonbori every third Saturday.

You can shop till you drop

Fulfil all your shopping needs in the city’s major hubs, each of which is named for the train station it surrounds: Namba, Umeda, Shinsaibashi and Tennoji. For vintage clothes and funky shops, try Amemura (short for Amerika-mura, or American Village), an ever-changing neighbourhood stuffed with used-clothes stores, cool bars and trendy cafés and restaurants. Nakazakicho, a neighbourhood east of Umeda, is filled with vintage shops and cute bars and cafés in restored pre-war wooden houses. 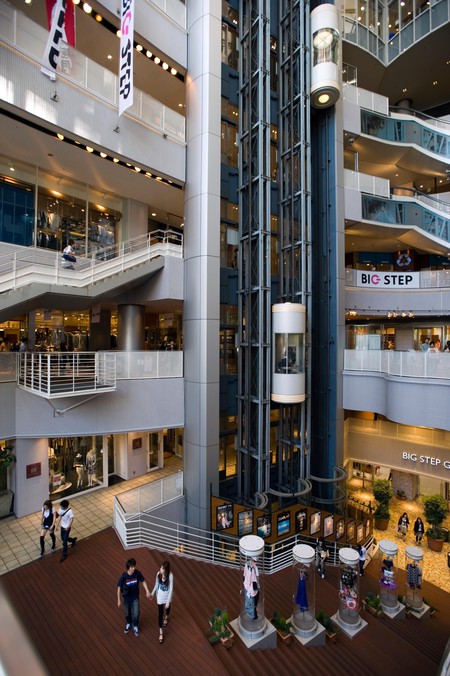 It has Japanese culture, old and new

Tenjin Matsuri, one of Japan’s most famous festivals, is just one of the many celebrations that take place in Osaka throughout the year. A tradition since the 10th century, this late-July festival features processions of small shrines through the downtown area and along the river that flows through the city. People from all over Osaka come out to participate donned in traditional clothing. Booths with carnival games and street food line the roads, creating a festive atmosphere, and the festival culminates in a massive fireworks show.

Osaka is also home to one of the country’s most treasured baseball teams, The Hanshin Tigers. Games are held at Hanshin Stadium in nearby Nishinomiya City. Tickets are affordable and it’s worth it to go even if baseball isn’t your thing to see the spirited cheering section. Stay until at least the seventh inning, when everyone releases balloons into the sky.

Since the mid-1800s, kuida-ore, or ‘eat yourself bankrupt,’ was a phrase used to describe what locals do best in Osaka. You’ll quickly find that many people in Osaka are still living the kuida-ore lifestyle. Osaka specialities include takoyaki (grilled octopus in balls of batter), okonomiyaki (savoury pancakes), yakisoba (fried soba noodles with beef), and kushikatsu (an assortment of vegetables and meat dipped in batter and deep fried, served on skewers). “The food reflects the soul of Osaka: it’s real, it’s local, and it’s not complicated; it’s unpretentious yet delicious,” says Sara Beheshti, an English teacher active in the local community theatre scene.

To find all of these local specialties in one place, head to Dotonbori, a neighbourhood packed with people, restaurants, and flashing neon signs. And the selection isn’t limited to Japanese cuisine: from authentic pizzerias to Michelin-starred French restaurants and sushi bars, Osaka has it all. 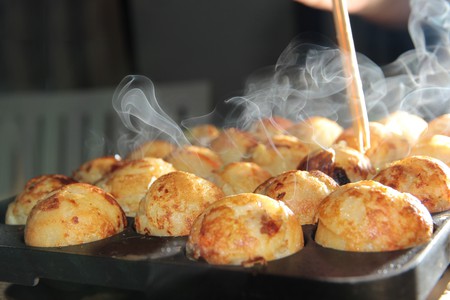 “My personal favourite thing about Osaka is the bar culture. You can tell most are owner-operated, and as the years go on the bars often evolve and change and just get more interesting. Osaka is vibrant at night, super friendly and beyond all that super safe,” says Jake Shilling, co-owner of The Hearth, a board game bar and café in a small side street next to Namba Station. There are easily thousands of bars in Osaka, with large concentrations in Namba, Umeda and Tennoji. There’s a real range too, from only-in-Japan host bars and tachinomi (small standing bars) to a growing number of Western-style craft beer bars.

It’s the centre of Japanese comedy

“I laugh so much here even with people I just met. That doesn’t happen in other places,” says Ikuko Ishitani, a native of Osaka who works in publishing. Osaka has been known as the centre of Japan’s comedy scene since the entertainment giant Yoshimoto Kogyo was established here in 1912 as a traditional theatre. It has since grown exponentially and employs most of Japan’s comedic talent. You can still catch Japanese comedy shows produced by Yoshimoto Kogyo at the Namba Grand Kagetsu Theater in Namba. For those interested in more mainstream English-language comedy, ROR comedy club, also in Namba, features standup by both local and international comedians. 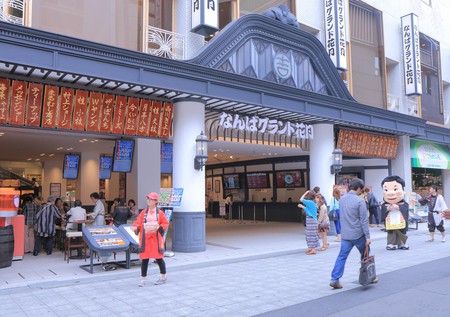 It’s easy to get around…

“It’s a big city, one of the biggest in the world, but it can also feel like a small town… the central area is between Tennoji and Umeda, and you can ride a bicycle between them in about 45 minutes. And every inch of city between those two points has every type of person… with the common thread that all of them are proud to live in Osaka, and welcome everyone to the city like a family member,” says O’Rourke. Osaka is the second-largest metropolitan area in Japan and has a population of more than 20 million, but despite its size, it’s easy to get around the city quickly using its subway system or even by bike. And with its long streets, narrow alleyways and colourful neighbourhoods, Osaka is best seen on foot.

… and is a major travel hub

“Osaka is the best place to stay in Japan. Day trips to Kyoto, Nara and Kobe are possible, and while they’re quite sleepy towns in the evening, Osaka comes alive with music, restaurants and bars,” says Shilling. If you’re staying in the downtown areas of Umeda or Namba, it’s possible to access all of the cities Shilling mentions in under an hour. And from Umeda Station, you can get to Hiroshima in under two hours, and to Tokyo in under three by shinkansen (bullet train).

Not only is travel from Osaka fast and affordable, it’s incredibly convenient. Trains come often and on time – to the second. In recent years, WiFi has become available on many train lines, such as the Keihan Main Line, which travels between Osaka and Kyoto, stopping at popular tourist spots in both cities. Most signage in main stations is in English, Chinese and Korean. And the trains live up to their reputation: they’re impeccably clean, and no one eats, drinks, or talks on the phone. 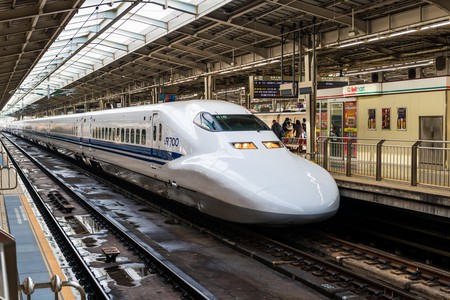 It’s not the urban jungle you thought it was

Osaka may be known as a concrete jungle, but it has many beautiful and easily accessible parks, plus a river and canals running through it. “The canals running through the city create a gritty yet beautiful character,” says Tim Fieldes, who works at a Japanese houseware brand and moonlights as a DJ. Utsubo Park and Nakanoshima Park are both true urban oases – vibrant green areas in the middle of business districts. Both are famous for their meticulously groomed rose gardens that bloom in May. Expo ’70 Commemorative Park, a 30-minute train ride from Umeda, was the site of the 1970 World Expo and still contains some of the futuristic art created for it, including Japanese architect Tarō Okamoto’s grand Tower of the Sun. It’s also home to flower gardens, walking trails, grassy hills and two of Osaka’s best museums; the National Museum of Ethnography and the Japan Folk Crafts Museum.