Great Things To Do in Osaka's Fukushima District 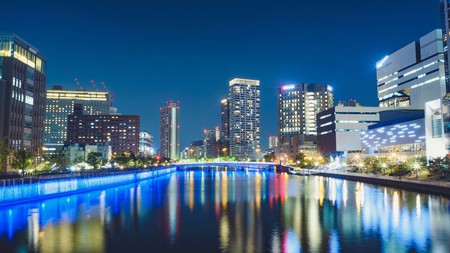 Once a run-down district overshadowed by nearby glitzy Umeda, Fukushima is on the way up. Here are eight unique things to do in this underrated and often overlooked neighbourhood. 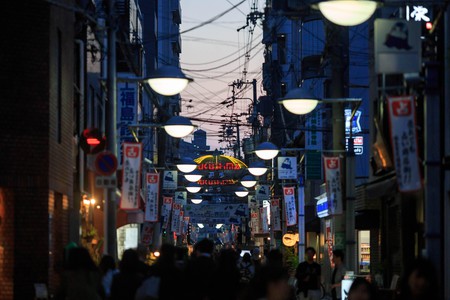 Fukushima-ku is primarily known for its proximity to its better-dressed sibling Umeda, but in recent years it’s become a worthy neighbourhood in its own right. The area has extended the border of downtown Osaka with its array of boutique hotels and chic shops, but has somehow retained its old-world charm. Here’s a list of great things to experience in Fukushima district.

Upon entering the neighbourhood from JR Fukushima Station, you’ll spot a large and colourful collection of murals painted on a series of columns. According to Japanese mythology, these modern depictions of Shichifukujin, the Seven Deities of Good Luck, are said to bring blessings and fortune. Painted by Grind Pencil, these commissions can be found under the elevated train tracks, but his works are dotted all around Osaka’s alcoves and storefronts. 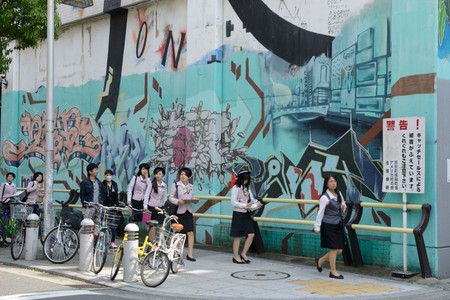 Relax and shop at Laxa Square

Laxa Square is a shopping centre located just outside of JR Fukushima Station. Out front is an open plaza with an eye-catching yellow sculpture in the centre, where people often gather to relax on their lunch breaks. Inside are a number of elegant Japanese and European restaurants and cafés. Laxa regularly hosts special events such as mall-wide happy hours and afternoon markets.

Soak in the hot springs at the Hanshin Hotel

Inside Laxa Square is the upscale Hotel Hanshin, which houses a luxurious spa with a hot-spring bath and a sauna. Anybody can come to indulge in the facilities, not just guests of the hotel. The bathing area is bright and airy, with plenty of massage chairs where you can enjoy some post-soak relaxation.

For a more local experience, take a walk down Fukushima Shopping Street. Look for the vintage neon sign resembling a UFO with the word ‘Fukushima’ on it and head on down. It’s lined with scores of small shops, and there are plenty of things here to keep you occupied. If you’re into the supernatural, there’s a divination event on the fourth Friday of every month, when you can try your luck with a fortune teller. This historic shopping strip is also home to the Michelin-star soba shop Sobakiri Karani. 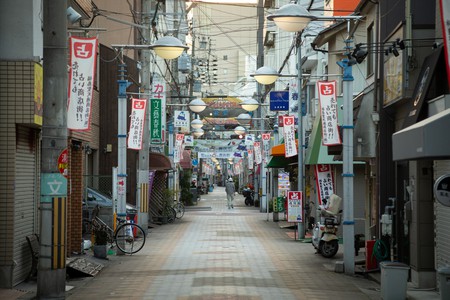 Fukushima Tenmangu is an ancient shrine tucked away under a canopy of green. It’s a peaceful refuge from the bustling district and, being one of the lesser-known shrines, is rarely crowded. Like other shrines of the same name, including the nearby Osaka Tenmangu, Tenmangu shrines are dedicated to education and the performing arts. Students often flock here just before exams to pray for good grades.

Immerse yourself further in Fukushima’s history by visiting a visually striking historical property. Though now headquartering an apparel company called Minami, it’s been preserved as a historic relic of old Osaka and is a registered cultural asset. Designed by famous architect Matakichi Yabe and constructed in 1934, it was originally Kawasaki Savings Bank. The Greek columns and stone construction of the structure hark back to the period when Japan was rapidly westernising, and are rare sights in modern Japan.

Fukushima connects directly to Osaka’s urban oasis, riverside Nakanoshima Park. The park is practically an island, surrounded by water and the bright lights of the downtown skyscrapers, which can be reached in 20 minutes by boat – a journey that is especially pretty at night when the colourful lights reflect on the water. The short but scenic cruise departs from 5pm until 9pm at half past every hour from the Fukushima (Hotarumachi) pier. 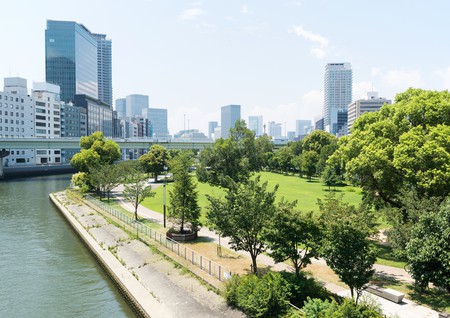 Find the building that has a highway running through it

The Gate Tower Building in downtown Osaka is a unique spectacle. Running through the fifth, sixth and seventh floors of this cylindrical building is an expressway exit ramp. A series of land ownership disputes led to the unprecedented compromise that married a skyscraper to a highway in the late 1980s. Special soundproofing construction keeps the office workers in the upper floors from being disturbed by the rumble of traffic just below. 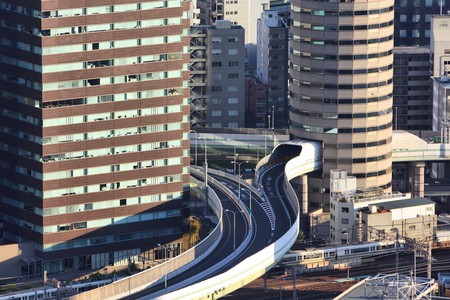