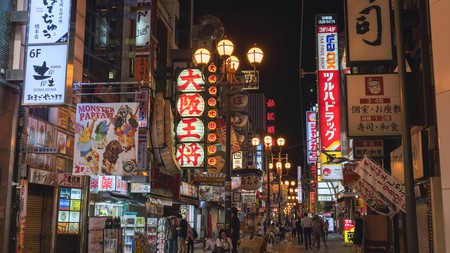 Osaka is a non-stop party zone, where raging all-nighters are just a part of the regular routine. Check out our list of the best bars in the city that stay open all night long, if not later.

Public transit in Japan is so reliable, most people take the train to a night out so they can drink without consequence. Yet, even Japan’s railways have to rest. In Osaka, as in other major Japanese metropolises, the trains and subways stop operating between the hours of about midnight and 5am.

The local bars and clubs, however, do not. It’s between these hours that the nightlife shines. Many hop on the midnight train bound for one of the city’s party districts and stay out until the trains start running again. Below are the best bars to drink in until the wee hours. 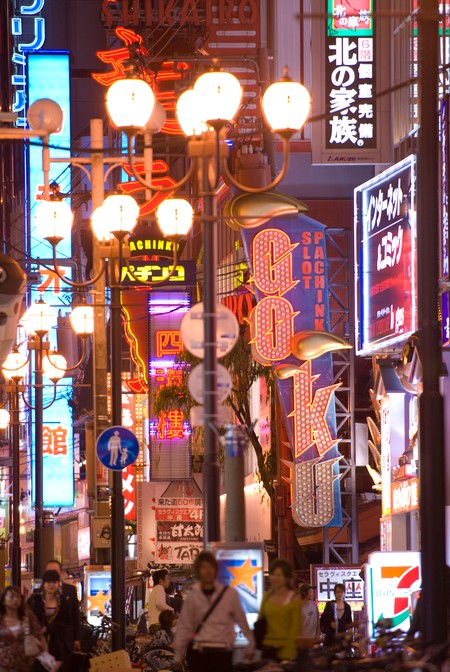 Osaka is one of the best cities in Japan for party-goers | © mikecranephotography.com / Alamy Stock Photo

Bar, Pub, Pub Grub, Japanese, $$$
Facebook
Email
Twitter
Pinterest
Copy link
Share
Map View
The atmosphere at Captain Kangaroo, a popular downtown Umeda haunt, manages to strike a balance between laid-back and raucous at all times. Sporting event viewings, drinking game competitions and live music are all regular fixtures throughout the week. Massive, mouthwatering burgers are served alongside standard bar foods to keep you well fuelled through the night. Located west of Osaka’s main station, this bar is very accessible – perfect for stumbling back to your hotel room in the wee hours of the morning. Captain Kangaroo is open until 5am every night of the week except Sunday.
Open In Google Maps
5, 1-chōme, Sonezakishinchi, Kita Ward Osaka, Osaka, 530-0002, Japan
+81663460367
Visit Website
Visit Facebook page
Give us feedback

Grand Slam is a lively bar located in the vibrant Doyama district, the centre of Osaka’s LGBTQ scene. This gay bar is open seven nights a week and stays open until 5am every night except Sunday. The flamboyant crowd is often a mix of genders and nationalities, though the bar caters mainly to gay men. There’s no cover charge to enter, the drinks are cheap, and there’s karaoke for all to enjoy. Grand Slam also regularly hosts dance parties and DJ events on weekends.

Bar, Pub, Japanese, $$$
Facebook
Email
Twitter
Pinterest
Copy link
Share
Map View
This tiny bar is so popular it’s perpetually jam-packed. Conveniently situated in Shinsaibashi, which is famous for its vibrant nightlife (and shopping), CinqueCento is literally in the heart of Osaka’s party district. It’s warm and welcoming enough to spend an entire evening meeting new people from all over the world, but it also makes for a great stop on a pub crawl. Every drink here costs 500 yen (£3.60) – hence the name CinqueCento – making it an affordable place to down a drop or two. It’s open until 5am every night, except Sundays when it closes at 3am.
Open In Google Maps
2-1-10, Higashishinsaibashi, Chuo-ku Osaka, 542-0083, Japan
Give us feedback

Bar, Japanese
Facebook
Email
Twitter
Pinterest
Copy link
Share
Map View
A night out in Japan is not complete without a little karaoke, and a nighttime excursion to Shinsaibashi just isn’t the same without a trip to Kama Sutra. This tiny but lively karaoke bar is a staple of the local scene. Customers sing together in one cosy space and can choose from over 130,000 songs while ordering drinks at the bar. The staff are extremely friendly (especially the owner, Richard) and speak both Japanese and English. They’ll sing with you, too! Kama Sutra is open until at least 5am every day of the year.
Open In Google Maps
1, 2 Chome, Higashishinsaibashi, Chuo Ward Osaka, Osaka, 542-0083, Japan
Visit Facebook page
Give us feedback

Bar, American
Facebook
Email
Twitter
Pinterest
Copy link
Share
Map View
Another hidden gem in Shinsaibashi, rock bar Cherry Bomb stands out with its carefree vibe. American owners Chris and Jesse originally opened this joint to fill the gap of rock music venues in the local bar scene. It has since evolved into a gathering place for late-night lovers, where you can be sure to find good company. While they don’t have anything fancy in terms of cocktails, there’s a respectable selection of ice-cold craft beers bottled and on tap. Cherry Bomb offers what’s at the core of all the best bars – a fun atmosphere, good music and most importantly, great company. They stay open until 6am on weekends, and until at least 3am other nights of the week.
Open In Google Maps
4-8 2, 2-chōme, Higashishinsaibashi, Chuo Ward Osaka, Osaka, 542-0083, Japan
+818042422357
Visit Facebook page
Give us feedback

Bar, Italian, Japanese, $$$
Facebook
Email
Twitter
Pinterest
Copy link
Share
Map View
In a town known for being a little odd, Kinguu is one of the strangest bars around. This Victorian horror-themed bar is one of the only places to get real mead and absinthe in Japan. Both pair perfectly with the ambience, which feels straight out of a retro horror movie. Kinguu is dimly lit and packed with curious odds-and-ends, including an actual taxidermied camel. The owner fully embraces this vibe by wearing outrageous clothing and make-up, but don’t be fooled – he is incredibly kind and speaks English well. Kinguu is sure to delight fans of the macabre and bizarre. It’s open every night until 5am, except for Tuesdays.
Open In Google Maps
1-19-8, Higashishinsaibashi, Chuo-ku Osaka, 542-0083, Japan
Visit Facebook page
Give us feedback

Bar, Japanese, $$$
Facebook
Email
Twitter
Pinterest
Copy link
Share
Map View
Balabsushka is a rare behemoth. This massive bar is a popular meeting spot for groups of young party-goers. People tend to start at Balabushka before heading off to clubs in Amerikamura, though it’s open until 5am on weekends for any night owls who choose to linger. The friendly atmosphere – which is fuelled by multiple pool tables and dart boards – allows visitors to easily meet new people. The bar offers a great range of drinks, from cocktails to whiskey to beers. Order light snacks as well if you’re feeling peckish.
Open In Google Maps
2-9-5, Nishishinsaibashi, Chuo-ku Osaka, 542-0086, Japan
Give us feedback

Bar Heaven for parties that go til 10am

Heaven is indeed a place on earth, although this Osaka bar has a reputation that’s anything but holy. Heaven is where Osaka’s bartenders go after they finish work, so things don’t really get cracking until the wee hours of the morning. The patrons are usually good and drunk by the time they show up, so it’s no wonder this bar has one of the craziest raps in town. The music is loud, the drinks are strong and the crowds are wild. Heaven is open every single day until 10am, so this joint is for serious partiers only.