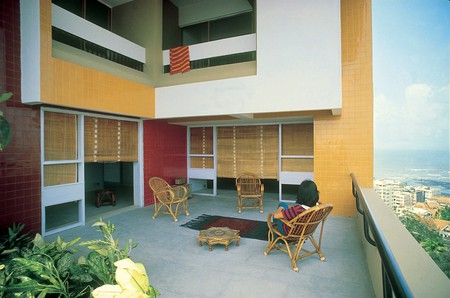 India’s most iconic modern architect Charles Correa had a prolific career, having designed almost 100 buildings in India alone during his lifetime, but whether it was low-income housing or luxury condos, Correa maintained a universal approach that respected the local conditions, met the practical needs of its inhabitants and acknowledged the spiritual nature and beauty of his country.

Charles Correa was named by the Royal Institute of British Architects (RIBA) as ‘India’s greatest architect’ in 1984 and it’s not hard to see why. While his contemporaries were following in the footsteps of Mies van der Rohe back in the 1950s, Correa rejected the cold glass-and-steel structural style in favour of a more ‘human’ approach, designing buildings that have a unique and deep-rooted understanding of India’s rich traditions in terms of both society and vernacular. 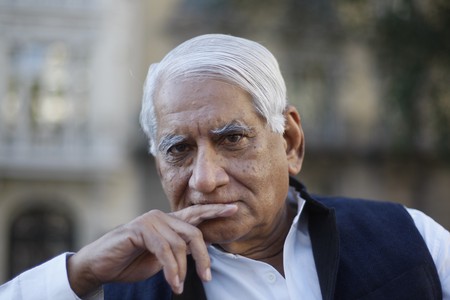 While he was undoubtedly influenced by the likes of Le Corbusier while studying architecture at MIT, he cleverly adapted the principles of modernism to suit a non-Western culture – something that set him apart from the rest and led him to play a vital role in shaping the urban landscape of post-war India. Unlike some of his contemporaries, Correa didn’t see tradition and modernity as mutually exclusive – he honoured the ‘sacred gestures’ and ‘mythic beliefs’ that have informed Indian architecture for thousands of years and wanted to ‘reinvent them in terms of new aspirations’. For example, in his essay ‘The Public, the Private, and the Sacred’, he questioned why a family living in a hot climate such as India would contain its essential daily activities within the traditional ‘four walls’ when it could be better served by a home with outside living spaces, such as terraces and courtyards, that could be used for cooking, socialising and sleeping instead. 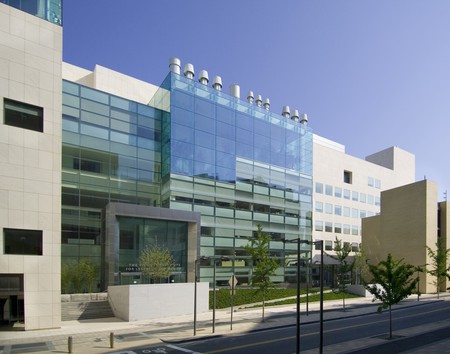 As well as being a student at MIT, Correa designed the McGovern Institute for Brain Research in 2005 for the institution | ©Vanderwarker9825

Correa, who died in 2015 at the age of 84, embraced the challenge of designing buildings for the urban poor, yet he never compromised on quality – he treated the low-rise, high-density housing of the Belapur project in ‘Navi Mumbai’ with the same attention-to-detail as his innovative Kanchanjunga high-rise of luxury apartments in Mumbai. He respected the Indian vernacular architecture by using local materials that were best suited to the social needs and environmental conditions. Using resources that were readily available also meant there was no need to import goods, which helped reduce the expense of each project, but also provided much-needed work for local craftsmen.

Correa commented on this in his essay, ‘Great City…Terrible Place’,which was published in his book The New Landscape in 1989: ‘A good architect does not have to be fazed by working under severe economic constrains, however drastic they might be. Having perforce to use only the humblest materials, such as mud or sun-dried adobe bricks, need not prevent him from creating a joyous and triumphal piece of architecture.’ 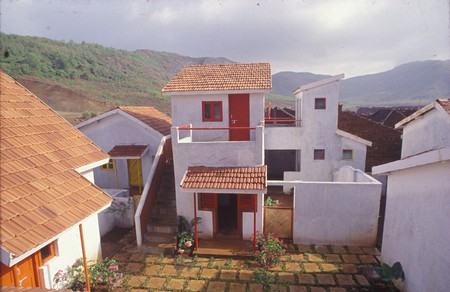 The Belapur housing project in ‘Navi Mumbai’ | Courtesy of RIBA

Correa was a firm believer that the buildings he created must respond to their surroundings, taking into consideration the particular needs of society and understanding and interpreting the local vernacular to create something truly appropriate. ‘Architecture is not a moveable feast, like music,’ Correa explained in an interview: ‘You can give the same concert in three different places, but you can’t just repeat buildings and clone them across the world.’

He also understood the importance of being connected to the great outdoors – the sky has a profound sacred meaning in the Hindu religion – and Correa didn’t want external space to be a luxury only reserved for those who could afford it. Even the Belapur modular housing solutions he created for the satellite city he designed, ‘Navi Mumbai’, included shared courtyards for every family to use. This ‘open-to-sky’ concept also incorporates his innovative passive methods of heating and cooling buildings; often Correa’s work features pergolas, verandahs, open courtyards and terraces, with a focus on quality of light, circulation of air and plenty of shade. 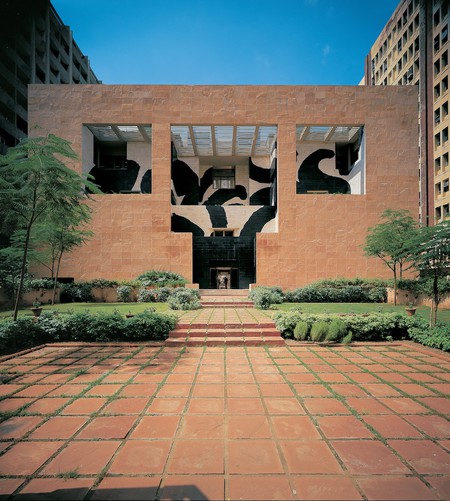 Correa proclaimed in his essay ‘The Blessings of the Sky’ that: ‘In India, the sky has profoundly affected our relationship to built-form, and to open space. For in a warm climate, the best place to be in the late evenings and in the early mornings, is outdoors, under the open sky.

‘To the poor in their cramped dwellings, the roof terrace and the courtyard represent an additional room, used in many different ways during the course of a day: for cooking, for talking to friends, for sleeping at night, and so forth. And for the rich, at the other end of the income spectrum, the lawn is as precious as the bungalow itself. Thus in traditional villages and towns all over India, such open-to-sky spaces are an essential element in the lives of the people.’ 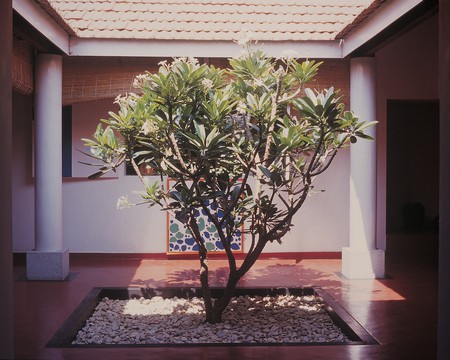 House in Koramangala | Courtesy of RIBA

While Correa’s low-cost housing in Mumbai may have adapted and evolved over time, many of Correa’s impressive institutional landmarks have a lasting presence in India. One of Correa’s most famous works was also one of his first – the Gandhi Memorial Museum inAhmedabad, built in 1963. The building fulfilled a brief that was also aligned with Correa’s beliefs – it was designed to be a modest space that would reflect the simplicity of Gandhi’s life, constructed on a human scale with basic materials including brick, stone and tiles. It’s also a prime example of his ‘open-to-sky’ architecture, with open walls and courtyard spaces that are suited to both social gatherings and quiet contemplation. 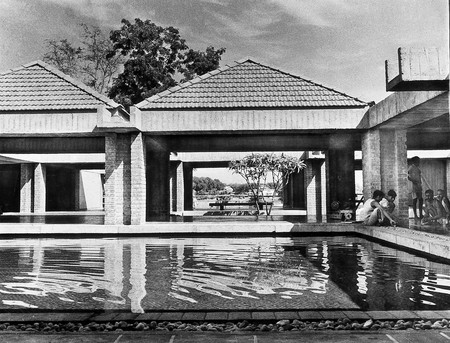 The Gandhi Memorial Museum in Sabarmati, Ahmedabad | Courtesy of RIBA

Another key landmark, the Jawahar Kala Kendra multi-arts centre in Jaipur, responds to what Correa referred to as the ‘mythical’ qualities of India. The building is based on the traditional Hindu system of architecture, using the principles of vastu shastra, where both the ‘science of architecture’ and nature are mutually respected and the ancient beliefs of using geometric patterns (yantra) and symmetry inform the design and layout of the building. The Jawahar Kala Kendra is inspired by the city plan of Jaipur, but also the nine planets of Navgraha, consisting of nine squares that surround a central open square. 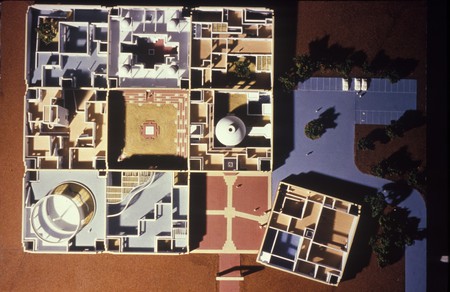 The Jawahar Kala Kendra arts centre, which is based on the ‘Navgraha’ mantra for the nine planets | Courtesy of RIBA

The arts centre is a clever fusion of past and present that respects the metaphysics and sacred beliefs of ancient India while presenting it in a new contemporary form. Charles Correa says in ‘The Public, The Private, and the Sacred’: ‘Hinduism has always had an astonishing ability to absorb diverse myths — to reinvent them, so to speak, so that they gain new currency,’ and his architecture also had this powerful propensity to give Indian architecture a new language through which to tell India’s tales. 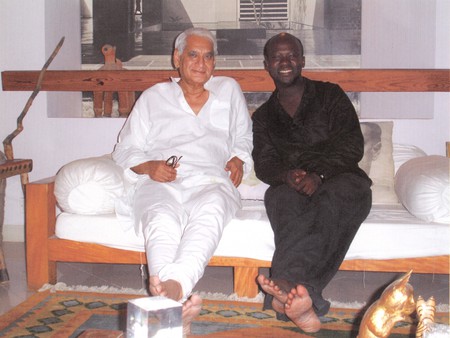 Architect David Adjaye, who designed RIBA’s 2013 retrospective of Correa’s work, two years before the older architect’s death, summed up the impact his buildings had had on India at the exhibition: ‘Charles Correa is a highly significant architect, globally and for India. His work is the physical manifestation of the idea of Indian nationhood, modernity and progress. His vision sits at the nexus defining the contemporary Indian sensibility and it articulates a new Indian identity with a language that has a global resonance. He is someone who has that rare capacity to give physical form to something as intangible as ‘culture’ or ‘society’ – and his work is therefore critical: aesthetically; sociologically; and culturally.’

For a list of all of Correa’s architectural feats, and his written works, visit the Charles Correa Associates website.