The Paintings Of Shi Zhiying: Searching For The Sublime 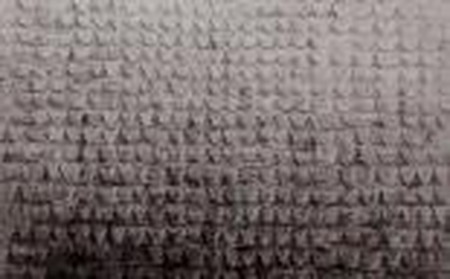 Born in Shanghai in 1979, Shi Zhiying is an internationally acclaimed artist best known for her oil paintings, which entice and mesmerise the viewer with their monochrome detail. Chinese tradition and contemporary metaphor coalesce on the vast expanses of her canvases. Luise Guest talks to Shi about the impact of Buddhism, the ocean and infinity on her work. 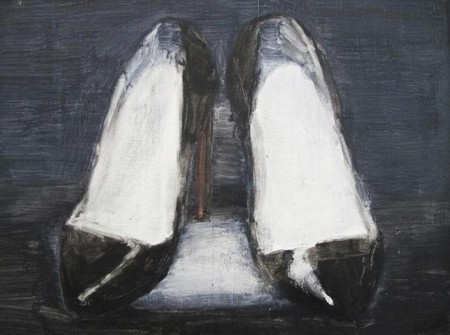 The Shanghai studio of painter Shi Zhiying is a large, airy, quiet space, with a chair positioned at its centre where the artist can sit and reflect on her works-in-progress, propped around the walls and on easels. We met on a day in late November when the city was experiencing its worst ever air pollution, which made the familiar studio smells of turpentine and oil paint a welcome respite from the toxic air outside.

Shi is best known for her immersive monochrome oil paintings of vast expanses of ocean; fields of lawn in which each individual blade of grass bends to the wind; the pitted surfaces of rocks, and raked Zen gardens. The common thread, which emerges in any conversation with this artist, is the profound importance of her Buddhist belief. Shi Zhiying’s work, despite its contemporary appearance, is informed by her reading of Buddhist scriptures, and her deep understanding of Chinese history and traditional culture. 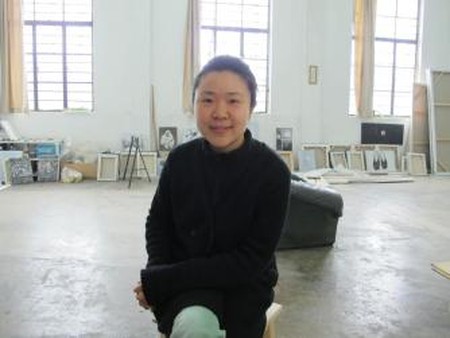 Sometimes she paints the apparently mundane objects of daily life – a pair of high-heeled shoes, a bowl of rice, a plate of cakes, some discarded clothing – and at other times she finds inspiration in literary works, such as her series inspired by Italo Calvino’s novel Mr Palomar. Whether her subject is quotidian or sublime, her awareness of the oneness of all things in the universe inevitably underpins the way she selects her imagery, and the painterly techniques she has developed over time to represent aspects of her world.

In a recent series of paintings, Shi has taken inspiration directly from Buddhist imagery. She recently visited the cave paintings of Dunhuang in Gansu Province, at a religious and cultural crossroads on the Silk Road, and one of the best preserved and most extensive collections of Buddhist paintings and sculptures in the world. As we spoke about a work-in-progress for a planned exhibition in Beijing in mid-2014, inspired by the images she saw in the Mogao Caves, we leafed through some of the many books she has collected. I could see how she has been inspired by the images of flying asparas and other deities, with their complex draperies and beautiful viridian greens underlying subtle faded colours. I asked her to tell me why these paintings are so important to her. She thought for a moment, then said, ‘It’s another kind of time and space, very different from our time and space. It is much larger… we can feel we are a very tiny grain of sand in the universe. This makes me feel (that) I am nothing.’ ‘Is that a good feeling, or an unnerving one?’ I wonder. ‘When I feel that I am nothing, I can hold everything, and everything can hold me – it’s a good feeling,’ she says.

I had seen the artist’s vast image of an endless ocean, ‘High Seas’, in Sydney’s White Rabbit Gallery. This is a painting which audiences often mistake, initially, for a large-scale black and white photograph, until they walk closer and see the loose individual brush marks and the drips and dribbles of thinned-down oil paint. In 2008, Shi based her ‘Sea Sutra’ series of paintings on her experience of looking down over the Pacific Ocean and suddenly being overwhelmed by a profound sense of her own insignificance, a feeling she described as ‘ceasing to exist’. These paintings of sublime vistas remove all unnecessary detail, focusing our attention on the boundless immensity of the ocean. It’s an immersive experience in the same way that observing a colour-field painting by Rothko envelops the viewer in its shimmering glazes. In these works, we see the familiar (the ocean, vast expanses of lawn) in new ways.

‘High Seas’ reveals Shi Zhiying’s control of her medium. Stripped of all colour, her intention is to show the vastness as well as the unity of the world. She works slowly, often making several studies and small versions of a painting before transferring the image to a large canvas. With her very thin washes of oil paint she controls the drips and dribbles and stains of paint, always aiming for an internal truth. Shi has worked in monochrome for many years, initially inspired by the black and white photographs of Hiroshi Sugimoto. ‘Simplicity is reality’ she says. In my first conversation with this artist some years ago, she likened her practice to the daily discipline of meditation, ‘a slow and peaceful process that takes a long time to develop.’ Later she clarified this statement. ‘Painting is not meditation. Painting is painting. But it can be like meditation because I do it carefully, honestly and truthfully.’ 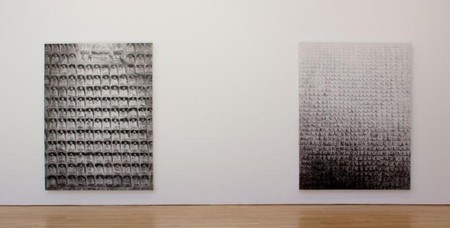 Shi has now embarked on a process of attempting to put the colour back into her works, beginning with a carefully nuanced approach of adding warm and cool tones to the blacks and greys, and using Mars Black due to its warmth. There are hints of Paynes Grey and indigo underlying the dark washes that form the background to new large paintings of a Buddha figure. This reveals the sculptural approach to painting that distinguishes her work –successive planes and shapes are laid down, rather like building up facets to create a fully realised and modelled form. The artist tells me that she visited Shaanxi Province to look at the ancient sculptures and relics found in tombs there, most particularly in Xi’an, which has informed her recent series of paintings of Buddhist reliquaries and other ancient artefacts, ‘The Relics’ shown at the James Cohan Gallery, New York, in June 2013.

Whilst in New York she visited the Chelsea galleries and major museum shows. Seeing Edward Hopper’s paintings, which she had previously experienced only in reproduction, was a revelation. ‘The structure and the colour!’ she exclaims. ‘When I see the real paintings, the colour is totally different! His colour is very… empty.’ She expounds on the purity and singularity of his use of colour. ‘This makes me re-think the structure and composition of my painting. Paintings have rules (of structure) whether in the western world or the Chinese tradition. The name of the rules may be different, but I think they are the same. I can use the rules of traditional Chinese painting to read Edward Hopper’s paintings.’ 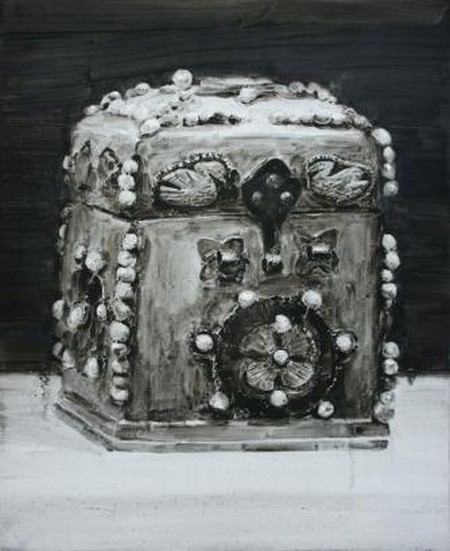 Shi Zhiying is increasingly making interesting connections between East and West, between different traditions and histories. She singles out James Turrell’s transformation of the Guggenheim rotunda as a profound experience during her visit to New York – seeing everyone looking up at the core of daylight with five elliptical rings of shifting, coloured light made her think of her previous experience of looking down at the vastness of the ocean. ‘I can see the same thing in Western paintings before, (in Renaissance and Baroque frescoes) when they painted heaven on the ceiling.’ She enjoyed the shared experience of being part of the audience looking up to Turrell’s version of the sublime. She also visited Rome, and likened its weight of history and imperial power to her experiences of Chinese antiquity. Visiting the Pantheon, she says she felt the same as when visiting the Buddhist frescoes at Dunhuang. ‘There is something higher than us. Something more. This makes me feel very moved.’ Her works tell us about the connectedness of the universe. One can look at the repetition of brushstrokes and see the repetition of sutras, Buddhist prayers, and the repetition of rituals that provide meaning to human lives. In the Buddhist reliquaries and traditional Chinese vessels, bowls and sculptural forms, paradoxically both solid in form and evanescent, ethereal, lies a desire to distil the true essence of each tangible object.