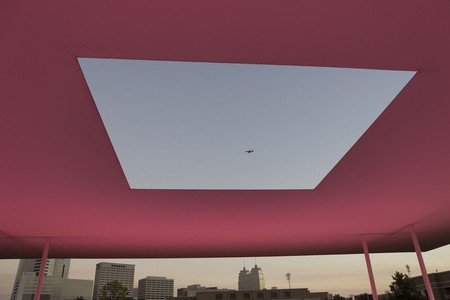 Artist James Turrell was an active member of the California Light and Space movement during the 1960s. His fascination for perceptual phenomena lives on through his Twilight Epiphany installation in Houston, Texas which transforms the sky into a kind of ever-changing painting and source for contemplation. 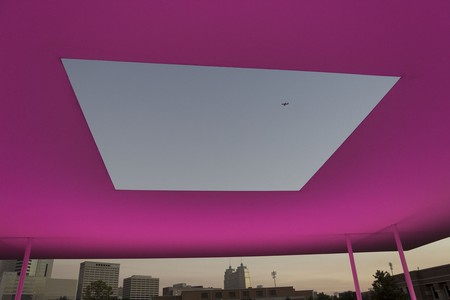 Think of the sense of wonder in a child’s eye on first encountering the vast ocean. It is a rare thing for an artist to create that same sense of wonder, especially for a jaded adult. At Twilight Epiphany 2012, or Skyspace Houston, it happens each and every night. Looking like a low-slung spaceship about to levitate above the perfectly manicured green grass of the Rice University campus, James Turrell’s Skyspace is a somewhat anomalous structure among the buildings inspired by the medieval architecture of Southern Europe. Nonetheless the smooth symmetry of the structure built on a mound is an appealing sight in the otherwise open field. Tunnels into the earth create a quiet passage for entry and the guide recommends talking be kept to a minimum. The Houston Skyspace is his 73rd, one of the largest, and the only two level installation of this series of Turrell’s work. It is constructed of grass, concrete, stone, and composite steel and is equipped with an LED light sequence perfectly timed to sunrise and sunset. During the 40-minute colour, light, and sound show, the colours range from cerulean blue, to muddy brown, silver that mimics stainless steel, and black before the stars appear. Sitting on the simple concrete bench gazing upward it strains belief that the square, which appears to be painted on the ceiling above, is actually the blue sky—that is until a plane or a bird flies by. The sky becomes an ever-changing painting to sit and contemplate. Pausing and surrendering to Turrell’s hypnotic play of light, the sky becomes as magical as when seeing it for the first time. Though always available, sometimes we just forget to stop and look up at it. 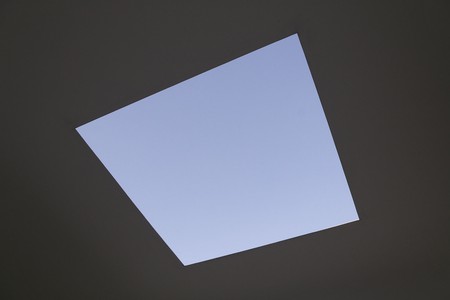 The work of 70-year old artist James Turrell is blanketing the United States this summer beginning with a trifecta of major exhibits in Houston, Los Angeles, and New York. The Houston Museum of Fine Arts’ blockbuster exhibit centres around a permanent work by Turrell as well as those owned by the museum. The Los Angeles County Museum of Art is honouring Turrell by presenting a retrospective on the past 50 years of his work – the largest survey of his art since 1985 – running from May 2013 to April 2014. The Perceptual Cell at LACMA, which is an individual optical experience for viewers, already has a waiting list reserved for many months. Over his five-decade career Turrell has become an expert on light-bulb varieties, studying the distinctive character of neon, argon, ultraviolet, fluorescent and LEDs. In New York at the Guggenheim Museum Turrell’s site-specific installation Aten Reign 2013 responds to the vast, curving sunlit space of the famous rotunda by casting a shifting light throughout. The work is the artist’s first New York museum exhibition since 1980. Also currently on view are two commissioned works in Las Vegas in the Shops at Crystals, a luxury shopping centre inside MGS Resorts’ casino-hotel complex City Center. Akhob 2013, a name that means pure water in ancient Egyptian, is on view by appointment or invitation at Louis Vuitton’s flagship Maison City Centre inside Crystals. Furthermore, the James Turrell Museum, part of the Hess Art collection, opened in 2009 at Bodega Colomé in Argentina. The museum is dedicated exclusively to Turrell, and art is exhibited in rooms especially fitted for these works.

James Turrell has been called a mystic of the Light and Space Movement that was centred in southern California in the 1960s. The works by this loosely affiliated group of artists focused on perceptual phenomena such as light, volume and scale. They often incorporated the latest technologies of California based engineering and aerospace industries in their installations of materials such as glass, neon, and fluorescent lights as they aimed to influence the spectator’s experience of light and other sensory phenomena. James Turrell began his experimentation with light in the early 1970s while living in the Ocean Park section of Santa Monica. The same sense of wonder and play with light that characterises Turrell’s work can be found in the geometric abstractions that the artist Richard Diebenkorn created in his Ocean Park Series during the same time period. Clearly the luminous quality of California light has had a significant effect on its artistic community.

Turrell’s most ambitious artwork is the as yet incomplete Roden Crater complex located on the artist’s ranch just outside Phoenix, Arizona. The crater is an extinct volcano within which Turrell has created a series of underground tunnels and rooms. In it he has been building a natural light observatory by reshaping the earth and constructing chambers all in an effort to create spaces aligned with celestial events like sunrises and solstices and to produce unique visual experiences illuminated by daylight and moonlight. Though the crater may never be finished, it will no doubt play with perception and awaken the viewer to their place in the vast beauty of light.