The Legacy Of Imperial China: Ten Great Museums In The World's Most Populous Country 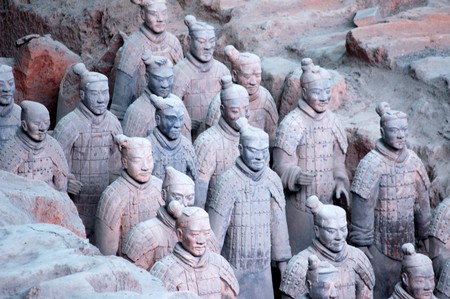 China’s extensive Imperial history left an enormous number of relics which have helped historians understand the dominant aesthetic preferences of each of the country’s many dynasties. Here is a list of ten significant Chinese museums exhibiting art from the country’s various art historical periods. 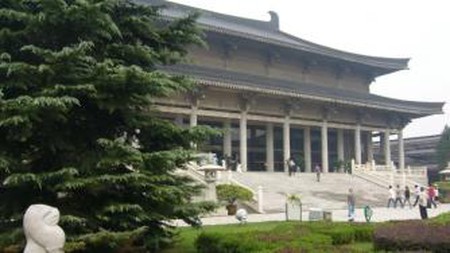 Opened to the public in 1991, the Historical Museum of Shaanxi Province is set in an architectural complex which recalls the ancient building design of the Tang Dynasty (618-907). The Shaanxi province is the birthplace of ancient Chinese civilisation, and thus it remains a cradle of knowledge on the important developments in Chinese history. The museum facilitates understanding of these key developments through the display of array of artifacts spanning from the Stone Age up through the end of the final Qing Dynasty (1636-1911). Treasures from the Sui, Tang, Ming and Qing Dynasties include finely made terracotta horses, glazed pottery and Buddhist inspired sculptures. 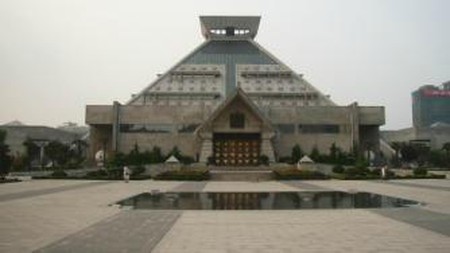 Although a relatively small institution, the Henan Provincial Museum is worth a visit for its impressive collection of pottery and porcelain, ancient brass and bronze objects, and intricately carved jade sculptures. A recent renovation has resulted in a new exhibition space which takes the form of a glass pyramid, with modern technology to complement the display. As one of the oldest museums in China, it was founded following a statement by General Feng Yuxiang of the National Revolutionary Army in 1927, that ‘Education is the Essential Politics for a Country’. 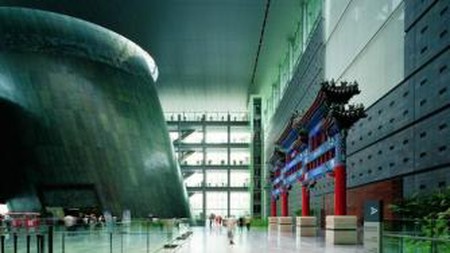 The original Capital Museum opened in 1981 in the Confucius Temple in Beijing. However, as part of the city’s five year cultural plan, begun in 1999, a modern museum building was constructed to house its growing collection. The vision for the new Capital Museum was to unite an ancient Chinese inspired architectural language with contemporary design. This sentiment is seen chiefly in the massive, overhanging roof which quotes traditional Chinese architectural style. The current collection of over 200,000 artifacts features Imperial Chinese porcelain, bronze, calligraphy, painting, jade, sculpture and buddhist statues as well as objects from other Asian civilisations. 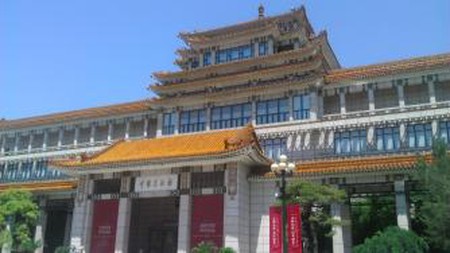 As one of the largest museums in China, the main purpose of the National Art Museum (NOMAC) is to collect, research and display Chinese artwork from the 19th century through to today. Its contemporary programme is however complemented by ancient Chinese relics as well as pieces by important Western figures. NOMAC officially opened to the public in 1963, and underwent restoration from 2004-2005 to increase the exhibition space by 5,375 metres. The stunning structure features Chinese attics and traditional regional architecture, surmounted by yellow glazed roof tiles. 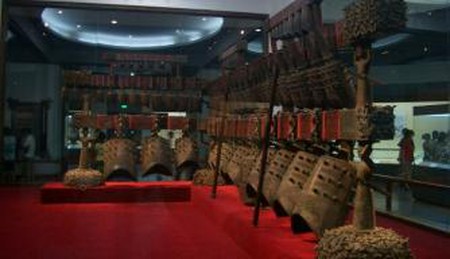 The Hubei Provincial Museum opened its doors to the public in 1953, but has been operating at its current location since 1960. Located in the Wuchang District of Wuhan, Hubei Province, and with holdings of over 200,000 significant objects, its displays concentrate of relics discovered in the surrounding region. The collection is divided into three parts: the Chime Bells Exhibition Hall, showing cultural artifacts taken from the Tomb of Marquis Yi of Zeng (died around 433 BC), the Chu Culture Exhibition Hall illustrating the culture of the Chu state (1030-223 BC) through a series of relics such as bronze vessels, lacquer works, bamboo and wooden artifacts, and the Comprehensive Exhibition Building which is still in the process of development. 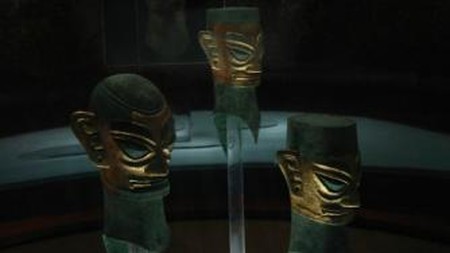 The Sanxingdui Museum was built very near to the Sanxingdui ruins, dating back to the Neolithic, Shang and Zhou periods. Displaying mainly the findings from this significant archeological site, the museum is split into two sections. The first of these is dedicated to ceramics, jades, and gold objects while the second focuses on its large collection of bronzes. Bronze relics on display can be further divided into two categories: those serving a ceremonial purpose and those constituting religious statues. The exceptional quality and uniqueness of the Sanxingdui bronzes has garnered much attention amongst art historians, and has led to international exhibitions of these treasures. 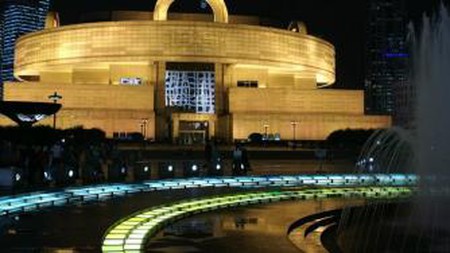 Amongst the Shanghai Museum’s impressive collection of bronzes, ceramics, calligraphy, furniture, jade, ancient coins, paintings, sculptures, minority and foreign art, are a series of relics of national significance, one of which is a transparent bronze mirror from the Han Dynasty. The museum’s extensive acquiring of ceramics is also a point of pride, exhibiting more than 500 ceramic objects spanning thousands of years. Examples of these include gray pottery from the Neolithic era, tri-coloured glazed pottery from the Tang Dynasty and porcelain objects from the Song, Jin and Liao Dynasties. 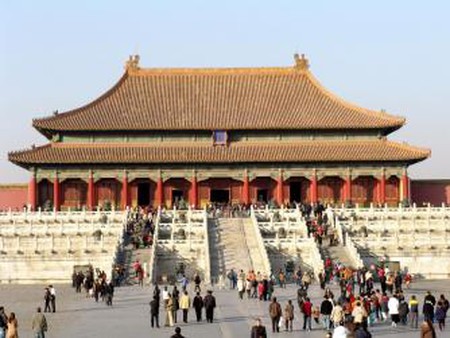 Located in the centre of Beijing, The Forbidden City acted as the Chinese Imperial palace from the Ming Dynasty throughout the Qing Dynasty. Built between 1406 and 1420, the architecture of the palace is a prime demonstration of Chinese palatial design. As the most extensive group of preserved ancient wooden structures in the world, it has been a UNESCO world heritage site since 1987. The Palace Museum took ownership of the Forbidden City in 1925 and today boasts an incredible collection of over 1 million paintings, ceramics, jade objects, timepieces, bronzeware, and palace artifacts. 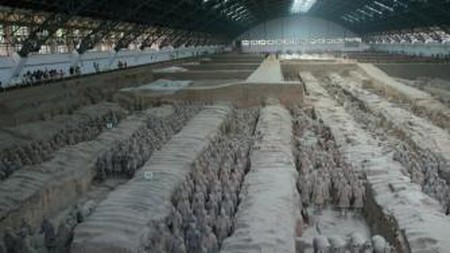 The Terracotta Warriors of the Lintong, Xian, Shaanxi Province are the most astonishing archaeological discovery of the 20th century. Emperor Qin Shi Huang ascended the throne in 246 BC at the young age of 13, and immediately began work on his mausoleum. The elaborate mausoleum was completed following 11 years of work, and included a large quantity of treasures and sacrificial objects. In 1974 a group of farmers discovered the Terracotta Warrios when digging a well 1.5 kilometers east of the emperor’s burial site. Plans for a museum begun in 1975, and the warriors have since become one of China’s most popular tourist destinations. 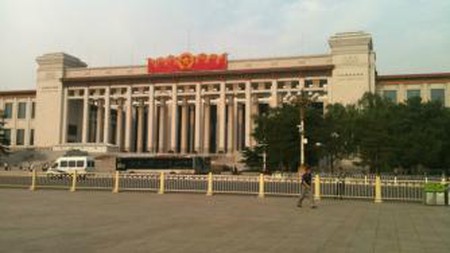 The National Museum of China

In 2003 the Museum of the Chinese Revolution and the National Museum of Chinese History, which had both occupied the same building since 1959, united to become The National Museum of China. The museum as it exists today has only been in operation since 2011, following a series of renovations undertaken on the original 1959 building. Its extensive collection of 1,050,000 objects spans from the Yuanmou Man of 1.7 million years ago through to the end of the Qing Dynasty. One of the museum’s most impressive pieces is the Simuwu Ding from the Shang Dynasty, a rectangular shaped bronze zun embellished with four sheep heads, the heaviest piece of ancient bronzeware in the world.