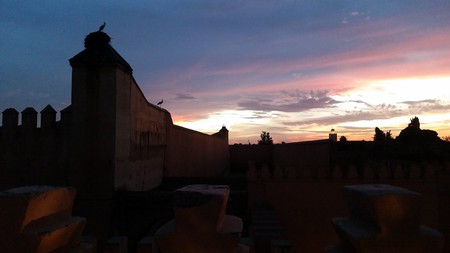 Sunset over the Kasbah in Marrakech Copyright Mandy Sinclair

The south-end of the medina, known as the Kasbah, is filled with palaces old and new — the Royal Palace occupies a large area of the district while nearby Badii Palace lies in ruins with evidence of the grandeur and elegance that once made up this immense palace. Hidden behind high walls and somewhat difficult to find, the Saadian dynasty is laid to rest at the aptly named Saadian tombs, discovered only 80 years ago.

The pace here is more laidback, more authentic, and more local. Bustling markets are filled with locals doing their daily shopping while butchers prepare fresh cuts of meat and vegetable traders sell only the finest selection. Street-side grills prepare some of the finest kefta kebabs served with fresh tomatoes and bread from the nearby community oven to diners in unassuming snack-style restaurants. The newly renovated Kasbah mosque is one of the largest in Marrakech and towers over the quartier. At night women sit in the plaza near the entrance as children run free, playing soccer while the keyhole doorways are opened, giving a glimpse into this large religious space, which is closed to non-Muslims. 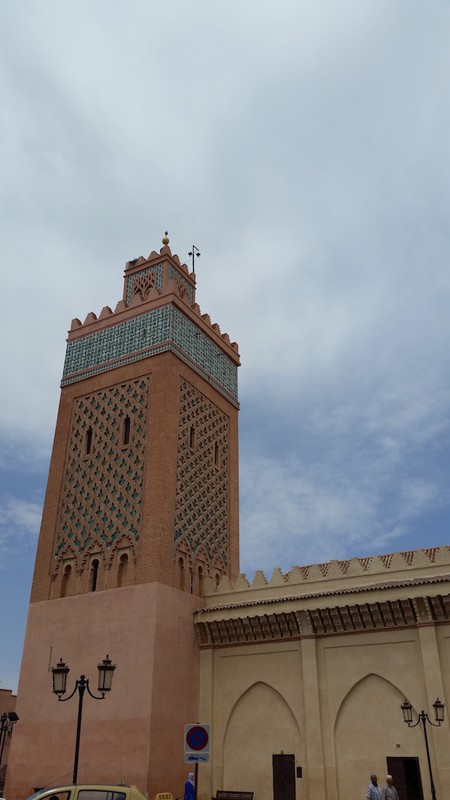 Even the storks have made themselves at home in this local neighbourhood. Look up and you’ll see their sizeable nests atop pillars and minarets with the birds flying overhead throughout the day.

Sunset over the Kasbah in Marrakech Copyright Mandy Sinclair

A local artist paints scenes from daily life on Koranic-tableau style boards and sells them from his little studio on the main street. Expect to see scenes from the hammam, circumcisions, and visits to the hospital depicted in a humourous manner.

New riads are opening to welcome guests wanting to stay in the neighborhood and accommodating to all budgets. Nearby, Café Clock, a cross-cultural café where hip locals and expats mingle, hosts nightly entertainment including Gnaoua music on Sundays and traditional storytelling on Mondays and Thursdays. 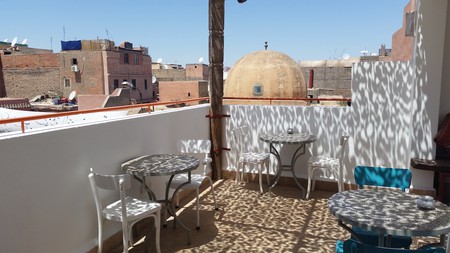 To access the the Kasbah, be sure to enter via Bab Agnaoua, a grand entryway! Built during the twelfth century, this elegantly carved stone gate is one of the most impressive gates in Marrakech, particularly in late afternoon as the sun amplifies its the orange color. 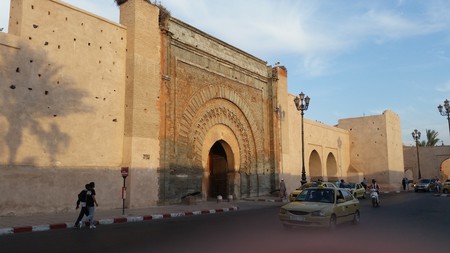 Bab Agnaoua in Marrakech Copyright Mandy Sinclair
Give us feedback