What Rai Music Means for Morocco 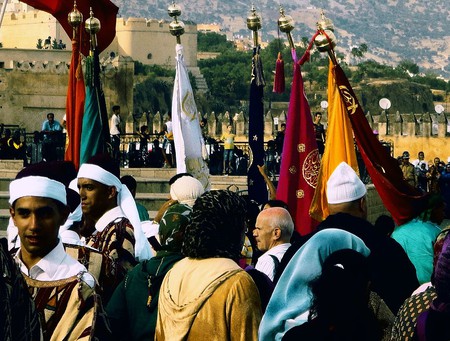 With a plethora of fascinating sights, enthralling experiences, delicious cuisine, a medley of sounds, and more, a journey around Morocco really appeals to the senses. Music plays a big role in Moroccan life and visitors are likely to hear several genres as they explore the country. Rai music is one type of music that can be found in Morocco. Learn more about rai music and its place in Moroccan culture.

Rai is a type of folk music that came into being in the 1920s. It became especially popular among poorer members of society, with lyrics that soulfully discuss social and economic issues, as well as delving into historical events. Indeed, the name means opinion. Rai singers, known as cheb (or chebba if female), croon about politics, human rights, sickness, colonization, and more. The words often appeal to younger people, people who would like to see positive changes in society. It is also common for fans of rai music to hold more liberal Islamic views.

Rai music uses traditional instruments, such as drums and reed flutes, alongside Western instruments, like violins and accordions, as well as electronic instruments. Though the majority of rai singers are male, female musicians can also be heard. The language used in Moroccan rai music is usually Darija, the Arabic dialect used in everyday life throughout the kingdom. French can also be heard at times. Slang words and colloquialisms are common.

Boussouar El Maghnaoui started performing rai music from a fairly young age in the 1960s. He was born in the eastern Moroccan city of Oujda. His lively songs are appealing to a wide group of listeners. Mimoun El Oujdi was also born in Oujda. Another popular rai singer, he has released more than 15 albums. Hanino’s style of rai is a bit more modern; listeners often cannot help but tap their feet along to the beat. Cheb Douzi is a highly successful rai musician. Born in 1985 in Oujda, his melodious sounds and dramatic lyrics have led to international fame. He is currently based in Belgium. Oujda-born Hamid Bouchnak is another big name on the rai scene.

Where Rai Music is Popular

Rai music is popular in the neighbouring country of Algeria. While it can be heard all around Morocco, it is most common in the areas close to the Algerian border. Oujda in particular is known for its rai music; the city is often said to be at the heart of the Moroccan rai movement. The city hosts a yearly festival dedicated to the musical style.

Although rai music is important to many Moroccans, it is at the heart of one of several disputes between Morocco and Algeria, with each nation claiming ownership. It is likely that music from each sides of the border contributed to the origins of rai, with elements of Moroccan raguada and Algerian allaoui heard in rai. But, where did it all begin? While Algeria’s Oran is often seen as the place where rai music really took off, it had been in existence for many years previously, with wandering Bedouin groups belting out songs in the desert between the two nations. Additionally, before French colonization in the Maghreb, Morocco owned land that is now on the Algerian side of the border. A further consideration is that the musical genre was formerly banned in Algeria for several years, with some people believing that the strong lyrics offended Islamic sensibilities and could cause social problems.