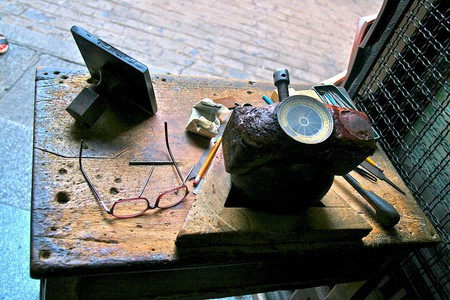 Morocco is known for its many crafts and artisan techniques, with numerous striking traditional items available to buy in the country’s various souks and markets. Many visitors may already be familiar with the tile work of zellige, which originated in Fez, woven carpets, handmade items of clothing, like djebellas and kaftans, the footwear known as babouche, and diverse leather goods. Most visitors, along with many Moroccans, do not, however, know about beautiful damascene metalwork. Known locally by the French name of damasquinerie, it is now only produced in one city in Morocco.

Damascene is an ancient artisan technique for decorating metal. A long and laborious process, it involves first cutting and hammering sheets or blocks of metal, usually steel or iron, into the larger shapes required. Thin cuts are made in the metal using slender chisels, creating the outline of the desired pattern. Next, thin threads of gold, silver, or copper are carefully hammered into the indentations on the metal surface, to embed a pattern or design in a contrasting color. A tiny hammer must be used to achieve the fine details and every piece of damascene is unique. After the metal wire has been fully completed on the metal surface, the item is put in a furnace to melt the thin metal strands. Alternatively, a blow torch may be used. Once cooled, the item is then polished to remove ridges and scratches. Lemon juice is often rubbed over the metal to help create a healthy shine. Only after this time-consuming and labor-intensive process is a damascene product completed.

Attractive damascene can be used to decorate a huge array of metal items, with both practical objects and those with purely an aesthetic purpose adorned with the beautiful craft. Swords and shields, items of jewelry, like necklaces, bracelets, earrings, brooches, rings, plates, bowls, vases, spurs and calipers, lamps, musical instruments, and ornaments are a few items that might be made more beautiful and eye-catching with damascene. 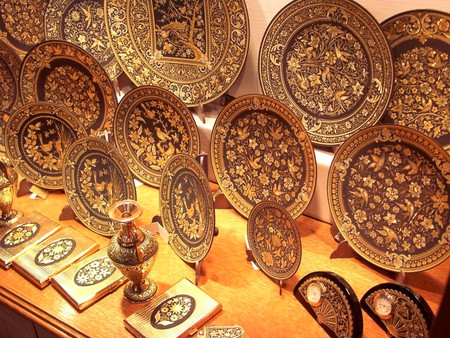 Nobody is entirely sure where damascene originated, but it is thought to have come to Morocco via Spain from somewhere on the Arabian Peninsula. It is believed that Jewish craftsmen took the skills and knowledge to Toledo in Spain, practicing and teaching their craft there for many years. When Muslims and Jews were made to leave Andalusia in the 14th century, many made their way across the Mediterranean Sea to Morocco, settling in places like Meknes and Fez. The Jewish damascene artisans were among those expelled from Andalusia, taking their techniques and crafts to the Maghreb.

Artisans from Toledo, Spain, generally favored using gold inlay, but silver proved to be more popular with Moroccan Berbers, who learned the craft from their Jewish neighbors. The intensive process led to the art being discontinued in many places in Morocco and overseas, but a few master artisans, known as maalems, keep the practice alive in Morocco’s old imperial city Meknes. As well as being the only city in Morocco where visitors can still find damascene, Meknes is among very few places in the world where damascene is produced.

Other global nations, including Japan, Malaysia, and Indonesia, have long traditions of producing damascene. 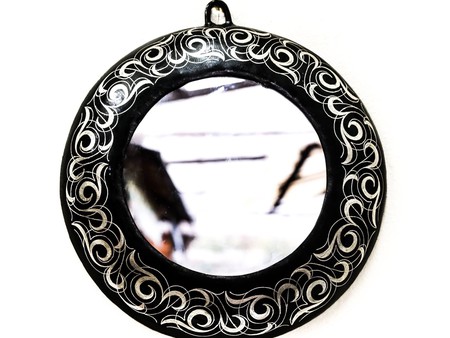 The Museum of Moroccan Arts at the historic Dar Jamai contains a collection of exquisite items decorated with damascene, with objects having been created in various eras. The building was also once home to a school that taught people the craft. Today, skills are typically handed down through the generations in families, or learned in a master-apprentice setting.

There are several stalls scattered around the city’s souks where you can browse and buy an exquisite selection of damascene-decorated metal wares.

There are also several spots where visitors can watch attractive damascene in the making. The award-winning Palais Damasquini, within Kobt Souk, is one such place. Skills have been passed down to members of the artisanal Essaidi family, who have been producing fine and detailed damascene for many years. The workshop of Abdelhak Ezzouak in Srairia Souk is another place to marvel at damascene being created. Look for small workshops and the clanging of hammers as you wander through the city’s souks and medina streets.

If you would love to own a gorgeous piece of damascene, but you don’t have the time to visit Meknes on your travels around Morocco, pay an online visit to Anou. A platform that connects Moroccan artisans with customers, several of Meknes’s damascene masters have goods for sale on the site.