The Best Moroccan Desserts You Need To Try 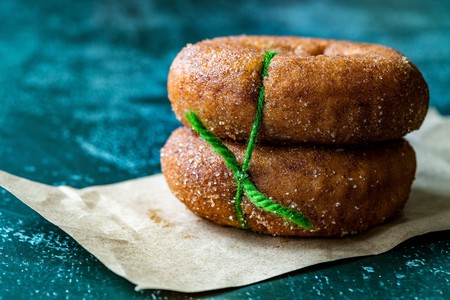 Moroccan cuisine is world-famous for its distinct flavours, aromas and ingredients. In a country full of food markets, restaurants and pâtisseries, you will be treated to the finest pastries, cakes and cookies.

Moroccan desserts are based on the beautiful produce and spices of Morocco, including ingredients such as dates, almonds, pistachios and oranges, and spices such as cinnamon, fennel, nutmeg, ginger and anise. And with the influence of French colonialism, Moroccans have perfected French pastries including croissants, crêpes and éclairs, which are excellent and can be found everywhere.

Although these bubbly pancakes are mostly eaten at breakfast, they are a standout dessert for many travellers to Morocco. Usually stacked on top of each other, they are incredibly light and delicious, topped simply with butter and honey. What makes them different to Western pancakes is that they are made with semolina, thinner than flapjacks but thicker than crêpes, and peppered with tiny holes that soak up the butter. They are unbelievably fluffy, and if you aren’t careful you could eat 10 in one sitting. So instead of whipping up some traditional pancakes at home, try these instead. 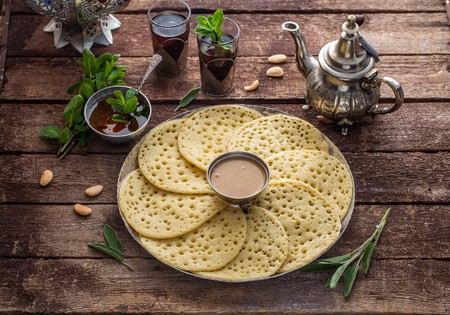 This fried pastry is shaped like a rose and soaked with a syrup of honey and sometimes rosewater, then sprinkled with sesame seeds. It’s a sweet and sticky treat that you can find in many corner shops and bakeries, especially during Ramadan. The crunchy yet chewy texture will have you reaching for more. It’s a laborious dish to make, but incredible to watch being made if you’re allowed to view the shaping and frying process. 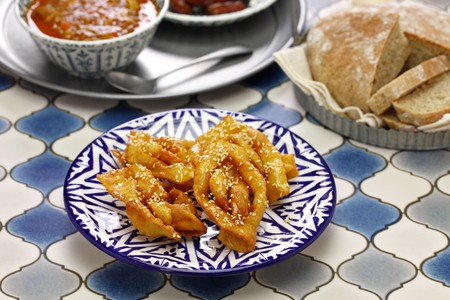 Baklava is a popular dessert all over North Africa and is also known in Greece and parts of the Middle East. It’s made with layers of phyllo pastry that are baked and then soaked with syrup and topped or filled with nuts. There are all kinds of shapes and variations of baklava, and it is a must-try in Morocco, where it is made with the rich flavour of clarified butter and sometimes hints of mastic syrup and rosewater. Try the BBC Good Food recipe here. 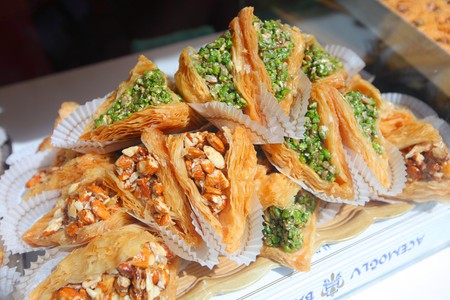 There are all kinds of cookies in Morocco, mostly shortbread that is either plain or made with different spices and nuts, or filled with dates and jams. They are always accompanied with mint tea and are crumbly and light. Ghriba is a popular type of cookie, which is easily identified by its cracked surface. They are crunchy on the outside with a chewy centre and always made with nuts of some kind. Another popular shortbread is maamoul, a round and buttery cookie which is often filled with dates, figs or nut pastes. They are absolutely delicious and melt in your mouth. Why not give this ghriba recipe a try.

Many cultures have a version of rice pudding, and in Morocco, the rice pudding, or roz bil heleeb, is hearty, spiced and comforting. This sweet porridge is served topped with shredded coconut and nuts such as almonds or pistachios. It will most likely be spiced with cinnamon and have a subtle orange blossom flavour. It’s a standout dessert made with simple ingredients.

This is a simple, but refreshing dessert. Morocco is a grower of some of the world’s best oranges and has increasingly become a competitive global exporter of citrus fruit. This dessert of sliced oranges, orange water and cinnamon highlights the flavour of the produce and is an easy recipe to make at home. It is a perfect way to end a heavy meal.

M’hanncha, which means “coiled like a snake”, is a large, coiled pastry meant to be shared. It can be cut into smaller pieces or pulled apart with your hands. Made with phyllo pastry, it is wrapped in almond paste and may have a cinnamon and orange blossom flavour and be coated with sugar, almonds or pistachios. Try the recipe here. 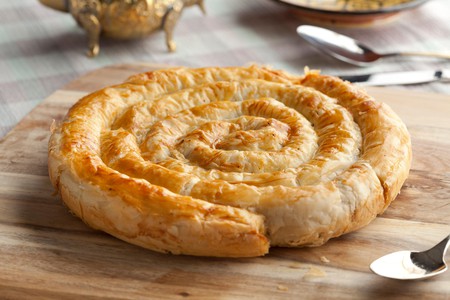 This list wouldn’t be complete without this Moroccan doughnut, a popular street food, eaten warm, straight out of the oil. This ring doughnut is slightly chewy, but crisp on the outside. The doughnut itself is not sweet and is known to sometimes be eaten with savoury foods. It has a subtle yeast taste and is traditionally lightly sprinkled with sugar. Head to The Spruce Eats for the recipe.