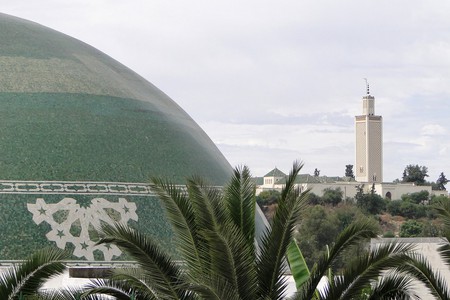 A laid-back, friendly, and delightful destination, Meknes is one of Morocco’s four old imperial cities. While Meknes sees fewer visitors than the historic former capitals of Marrakech and Fez and the current capital of Rabat, that doesn’t mean that you should skip spending a few days in the city. Indeed, the relative lack of visitors is part of what makes Meknes so appealing. Filled with stunning buildings from times gone by, here are some of Meknes’s most beautiful architectural delights.

One of Morocco’s grandest historic gateways, the glorious Bab Mansour is also often celebrated as one of the most beautiful entrance gates in the whole world. Indeed, an inscription in Arabic along the top of the monumental gateway translates as “I am the most beautiful gate in Morocco. I’m like the moon in the sky. Property and wealth are written on my front.” Built in the 1730s, the grand entranceway is adorned with stunning zellige tiles in various colours, carved wood, marble columns, arches, and fine brickwork. The main door, which is usually closed, is 16 metres tall. It was named after the architect that designed the gate, El Mansour. 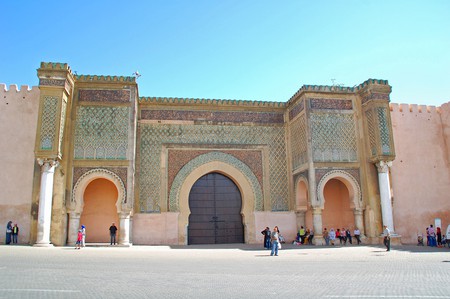 Bab el Khemis is another beautiful gateway into the historic medina of Meknes. Two towers with small windows flank the gate, and vehicles and pedestrians can pass through the arch. Blues, greens, and browns provide a pretty contrast to the sand-coloured walls of the medina, and the well-preserved entrance gate features traditional Moroccan craftsmanship, such as tile work, wood work, and plaster work. The gate has great examples of traditional Islamic designs. 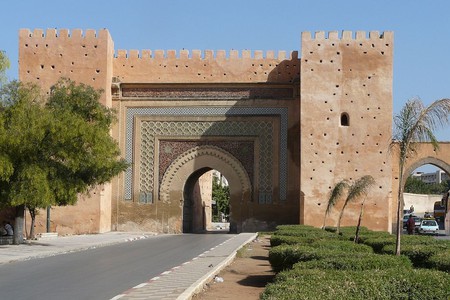 Dating back to the 12th century, the Grand Mosque was built during the Almoravid period. Located at the heart of the medina, the mosque’s green roof can be seen from some distance away. A sweeping sunken courtyard inside features tiles of white, grey, black, and blue, and a decorative ablutions fountain sits at the centre. Numerous curved archways with ornate wooden fittings lead through the gleaming white walls that surround the interior open-air courtyard. The mosque is, however, closed to non-Muslims. Visitors can admire the tall square-shaped minaret with its blue tiles and plaster work, though.

Now home to the Museum of Moroccan Art, Dar Jamai once served as a grand palace. It was built in the late 1800s. A palatial family home up until 1912, it was later used as a hospital for sick and wounded military personnel. The impressive façade gives way to even more glorious details inside, with carved wood, finely sculpted plaster, and colourful tiles. No part of the building is dull, with gorgeous floors, ceilings, walls, and doors. Features include elegant columns, grand arches, and exquisitely carved projections above the windows. 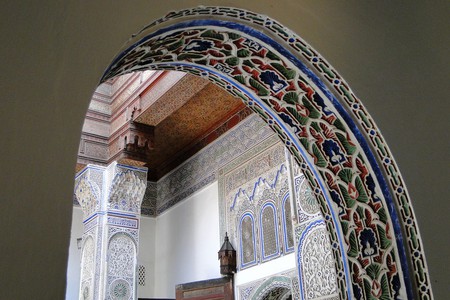 Not to be confused with a religious school of the same name in Fez, Meknes’s Bou Inania Madrasa was also a major centre of learning for followers of Islam. It dates back to 1341 and was built on the orders of a former Moroccan sultan. Showcasing striking Islamic designs, it is a great example of construction and design from the Marinid era (13th to 15th century). Quranic inscriptions, written in fine calligraphy, can be found on the decorative walls. Zellige tiles cover the lower sections of walls with ornate plaster work above. The detailed ceiling is made from cedar wood. 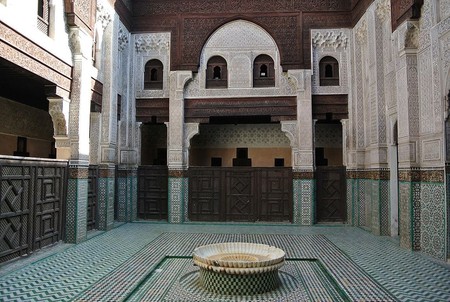 One of Meknes’s most splendid buildings, the opulent Mausoleum of Moulay Ismail is the final resting place of the city’s founder and a previous ruler of Morocco. Nicknamed the Warrior King, Moulay Ismail is still considered to have been one of the nation’s greatest leaders. Serene inner courtyards lead through to stunning inner chambers with detailed designs. The wall and floor tiles, inner fountains, chandeliers, sculpted plasterwork, carved wood, arches, colonnades, high ceilings, and symmetry cannot fail to impress. Non-Muslims aren’t allowed to approach the sacred tomb, though they can admire the rest of the beautiful interiors when the site isn’t closed for restoration works. 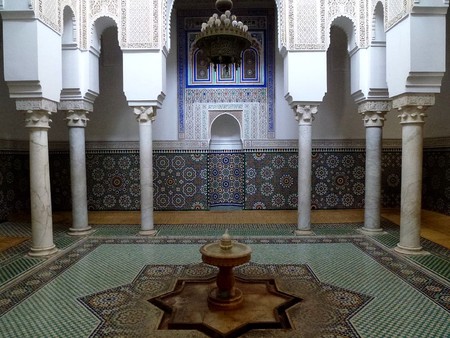 Constructed in the 17th century as part of the walls that were erected during Sultan Moulay Ismail’s reign, the rectangular Borj Belkari Tower is made more eye-catching by its rather plain appearance. Not as tall as typical towers, the squat tower is crenellated at the top and has small slits set inside wider arched recesses in the walls. The sandy-coloured building houses a pottery museum today.

The huge and impressive remains of Heri es-Souani were once the city’s main stables and granaries. Within the grounds of the palace’s ruins, the imposing building was a major engineering feat for its time. Visitors cannot help but be in awe of the mammoth size of the former storage area; it was designed to be able to house 12,000 horses at any given time as well as to store enormous amounts of grain. Partially restored, the roof collapsed during an 18th-century earthquake. The nearby reservoir of the Agdal Basin is another impressive sight. 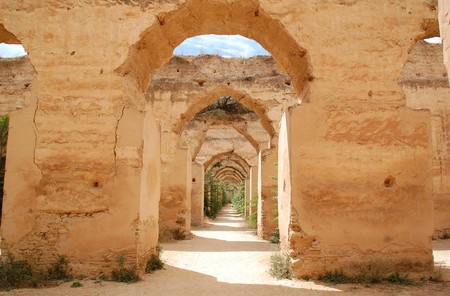 Habs Qara, also known as Cara (or Kara) Prison, is a large underground prison beneath the streets of Meknes. The chamber is reported to have been a place where up to 60,000 prisoners, including Christian prisoners of war, and slaves were kept. It was designed by an enslaved Portuguese architect who was given his freedom in return for his work on the gigantic underground jail. While there is little outside to mark the presence of the prison, visitors descend a flight of stairs adjacent to a small pavilion to enter a gloomy and eerie subterranean world. It is said that slaves kept here were often forced to work on Moulay Ismail’s grand construction projects. Conditions are rumoured to have been grim, with prisoners chained to the walls and made to sleep while standing upright. The dank corridors and cells, narrow ceilings, low arches, narrow staircases, and lack of natural light are sure to induce a shudder. 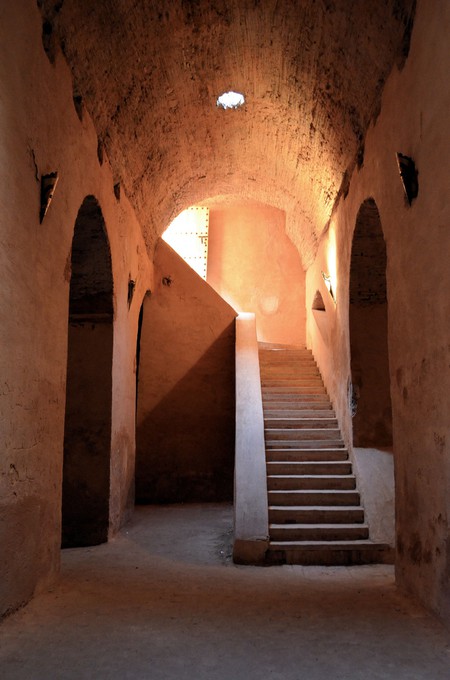 Meknes has several glorious accommodations in restored traditional homes, known as riads and dars; the attractive Palais Didi is one such hotel. Once a palace, it was previously home to a wealthy local family that was descended from Sultan Moulay Suleiman, one of the Alaouite rulers. The beautiful building has been renovated and restored with traditional Moroccan designs and elements. Rooms sit around an interior courtyard with a lovely fountain, and the roof terrace provides terrific views of the historic medina and vibrant greenery of the nearby golf course.

Although located outside of the city of Meknes, many people use the city as a base for visiting the ancient Roman ruins of Volubilis. A striking site, the ruins are the best Roman-era remains in the entire country. The site is a little over 30 kilometres from the heart of the city. The UNESCO-listed complex was initially established by Berber tribes before later being expanded by the Romans. It features well-preserved mosaics, the foundations of many now-crumbling buildings, an old railway track, part of an aqueduct, now-dry baths, monumental gateways, arches, carvings, and statues. 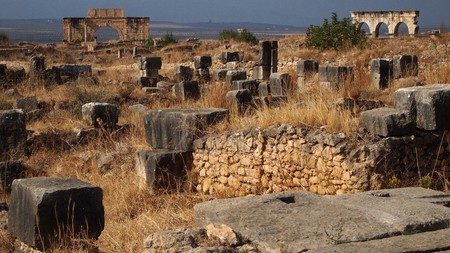 Meknes, and, indeed the rest of Morocco, has many places of architectural interest to discover and appreciate on a visit to the historic and peaceful city.