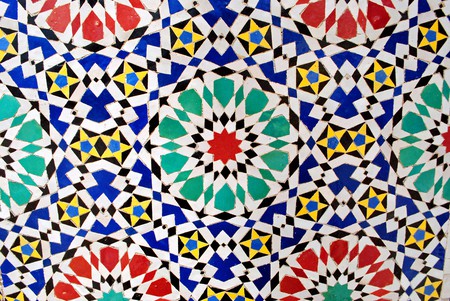 There are many attractive and unusual buildings to admire all around Morocco, from sacred mosques, revered shrines, and opulent palaces, to ornate gates, traditional riads, and mountainous dwellings built from clay. Morocco’s architecture displays influences from various cultures and time periods. One element that makes many Moroccan buildings stand out is the use of colorful tiles, arranged into beautiful patterns, known as zellij.

Zellij (also spelt zellige) is a craft that has been passed down through the generations. It is often referred to as Moroccan mosaics. Small pieces of tile, which have been carefully chiselled into the required shape, are inlaid in plaster. It is used to decorate walls, floors, and other surfaces such as fountains, columns, and pools. Zellij was developed to add aesthetically pleasing touches to buildings. Using geometric designs, zellij was the ideal way for people to decorate buildings in a style that was consistent with Islamic rules. Numerous patterns and colours can be seen in the delicate art, and rich Quranic calligraphy features prominently. Zellij can trace its history back to at least the 700s.

Although the famous Hassan II Mosque in Casablanca is one of Morocco’s newest architectural masterpieces, having been completed in 1993, it showcases traditional arts. Skilled artisans used time-honored methods and designs when creating the mosque’s stunning zellij. The iconic minaret has striking blue tilework, while the grand courtyard uses neutral colors. The base of the mosque boasts green floral-like tiles and there are beautifully tiled fountains. Look closely and you’ll notice that there are small zellij within honeycomb-effect carvings on the facades. The interiors are dazzling, with sublime tiled flooring that feature an array of colors and designs, decorated columns, and decorative tile work throughout the religious building.

A guard stands watch at the gorgeously tiled mausoleum of Mohammed V, the former Sultan and King of Morocco from 1927 – 1961 (and the current King of Morocco's grandfather). This guard looks quite stern, but actually they are quite quick to smile at you and take a photo with you after a polite "Salam Alaykum". #rabat #morocco #moroccanguards #mosaic #tiles #northafrica #travel #travelgram #travelling #wanderlust #vscocam #iphone6s #seetheworld #instatravel #wallart #salaamaleikum #design #instadesign #islam #islamicart #islamicdesign

Now home to a museum, Marrakesh’s Dar Si Said is a former grand palace. The architectural designs incorporate many beautiful features that were carefully created by skilled craftsmen, including zellij tilework. Look on the floor, column bases, the top of the walls, and the inset fountains in the main room for a variety of patterns and colors. Further stunning examples can be found throughout the building’s many rooms, with some rooms featuring entire walls that are adorned with zellij and carvings. Outside, fountains and flooring contain fine examples of Moroccan mosaics.

Once a lavish palace, Palais Soleiman is now a luxurious restaurant. A fine place to dine, visitors are transported back in time to the life of a wealthy Marrakshi as they admire the opulent décor all around. Antique tilework covers the lower sections of the interior walls and pillars as well as the floors. Master artisans from Marrakesh and Fes were integral in providing the palace’s ornamentation.

Oujda’s Grand Mosque dates back to the Merinid period, displaying many beautiful architectural and artistic details from that era. The mosque has undergone lots of restoration work to preserve the ornate tiling and other artistic features that make it so visually appealing.

One of Morocco’s greatest past leaders, it is only fitting that Moulay Ismail’s final resting place is somewhat larger than life. Three large courtyards have ornate tiled floors, while the actual tomb hall is a riot of color. Traditional tiling can be seen in an array of patterns and small pieces of colorful tile in numerous shapes and size.

#Morocco – The beautiful #Mausoleum of Moulay Ismail, #Meknès The #Moulayismailmausoleum —one of Morocco’s greatest rulers, who made Meknès his capital city in the 17th century—consists of three brightly decorated courts, a mosque, and the tombs of the sultan and his family. A visit to Moulay Ismail’s final resting place is believed to bring baraka—divine blessing. If you wanna discover more of Madrid check out @bojeltraveller

Not to be confused with a madrasa of the same name in Fes, Meknes’s Bou Inania Madrasa is often said to be one of the country’s most stunning buildings from the Marinid era. Tiled floors, fountains, and walls date back to the 1300s. The tilework adds splashes of color to rooms that would otherwise be just white and dark tones.

Also known as the Royal Palace, Dar al Makhzen is the official home of the Moroccan king. Constructed in the 1860s, the lavish palace is filled with arresting decorative effects. Though members of the public are not allowed into the complex, visitors can get an idea of the splendor from the large ceremonial main gate and the high walls that surround the complex. Beautiful zellij surround the sturdy doors in the gateway. Do note that photography is not permitted of any part of official royal buildings; if police see you snapping a sneaky picture they will, perhaps rather haughtily, demand that you delete any images.

Fes is the home of Morocco’s esteemed zellij, so it is of little surprise that some of the finest buildings using such tilework can be found in the former imperial city. Though non-Muslim visitors are not allowed into the main tomb hall of the Moulay Idriss Mausoleum, there is still beauty to admire in the preceding rooms. The ante-room is especially grand, with zellij stretching from the carpet-covered floor to the fine plasterwork and carved wood.

Sidi Abdallah Ben Hassoun Mausoleum contains the tomb of one of the town’s main saints. Built by a rich family to honor the saint after his death in 1604, the mausoleum is the most revered and beautiful site in Sale. Fine blue and white tiles are found on the walls and columns.

A former royal palace, Tangier’s 17th-century Dal al Makhzen now contains two museums that are dedicated to arts and history. The floor of the central inner courtyard is covered in old colorful tiles, with a raised zellij-covered fountain in the middle. The tiles contrast with the white walls.

Wall and floor inspiration at the Kasbah Museum #travelerintangier