Bantus Warrior: An Interview With The Artist Kouka 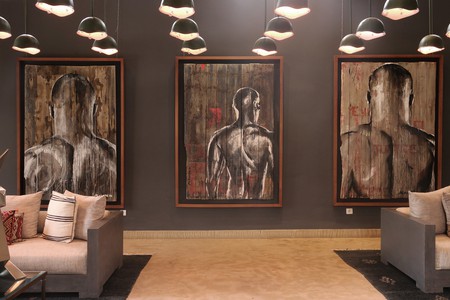 Painter, rapper and father, French-Congolese artist Kouka Ntadi is back in Morocco at the Jardin Rouge as part of a residency at the Montresso* Art Foundation. We had a chance to catch up with him, in between working on his latest collection Dos au Mur and working on some new ideas. Known for his Bantus warrior paintings, which he has put up around his native Congo, his works haven’t always been so well received by the people who view them. However, in his latest works, he hopes to change the perception of the warrior and the protective spirit these images wish to provide.

Where are you from?
I’ve always lived in France with my mother, who worked in theatre, so I traveled a lot, living in the south of France, and the east and west. Both my mother and father are artists. My father is from Congo, and I traveled there as a child but I never lived there, as there was a civil war for 20 years. In 2008, when I was 20, I went back.

Is that what inspired your works?
In the beginning they were very much inspired by the first European people coming to Africa, taking photos of the tribes to then conduct race classifications in France – so it’s very inspired by those ethnic photos. There are a lot of documents about the tribes, and the characters that I drew are Bantus – who are a group of tribes from south of the Sahara; Gabon, Congo, Cameroon – as these tribes traveled a lot to South Africa to find water. But really, because it’s a very old civilization, dating back to before Christ, they built Africa. Over time, both Arabs and Europeans enslaved them. So the image is a symbol of the first human. 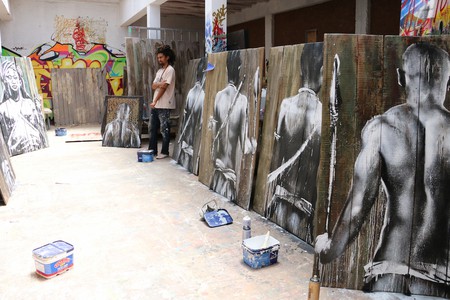 In the studio with Kouka | Photo: Jardin Rouge

How is your work evolving?
At first I was painting the Bantus warrior when I was in Africa in 2008 – that’s when it all started. I did a lot of graffiti, very classical graffiti; I also did art school. When I was in Africa, I was shocked that there was no graffiti or graffiti culture, and I was always wanting to paint. But if there is no graffiti, there is no people to understand. I wanted to do something that people could love, so I started to paint the warriors wherever I went. I began to really link the work of graffiti and canvas, and graffitied the Bantus in the streets. I didn’t do it on canvas, as for me it only meant something if it was in the street. On canvas it just looks like an ethnic painting.

What did the people of Congo think of the Bantus warrior?
They didn’t like it, because I think in the context of war it reminds them of the colonial past. I did a lot of them there but they were always erased. People thought I was a sorcerer. There is no graffiti so they didn’t understand it. What they saw was a savage and didn’t see themselves in the art. It’s really the only place where I have problems with that – but I still go back and still paint there. It’s cool because painting in the street is a way to connect with people, meet them, and talk to them. If you do something, some people like it, other people don’t; but what’s important is to talk. 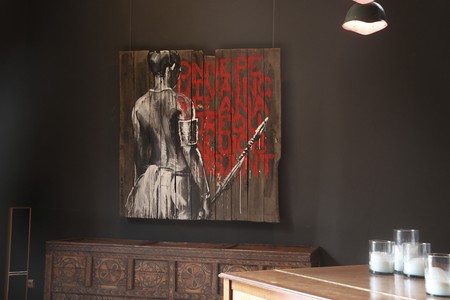 Is the warrior what people associate you with?
For people who do graffiti, it was not graffiti. For people who do African art, it wasn’t African art. I don’t know, it was like a logo that meant something. I keep on doing it because people recognize it like the symbol for human – naked, like we are all the same, with a weapon that is more like a tool for various reasons – to fish, to paint.

What message are you hoping to send through your art?
It’s really about the pride to be human, as you like – with your fears, problems, color, identity – and to retain the past as history and traditions. To say that we are all the same, all humans, and to be proud of what we are. Be strong. Be a warrior – but not military or soldier, more like a protector – to protect one’s self, one’s family and property. That’s why my paintings are not about fighting, but rather a symbol of the war against one’s self and bad intentions. And that’s why in my paintings you can’t see their eyes. 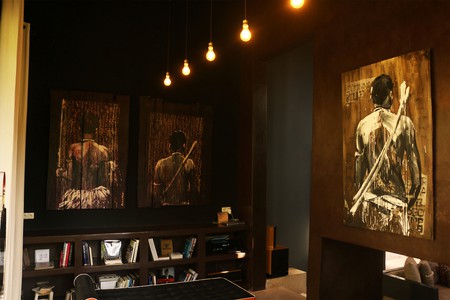 Why did you choose to draw their back, rather than their front?
When I did the Bantus, the protectors, a lot of people liked it, but said that he didn’t look like he was protecting me – he looked violent. And that wasn’t my intention. I was thinking about the idea of protection and why people think it’s violent, and when I was talking with the owner of Jardin Rouge he suggested that perhaps you feel more protected if you are behind the warrior, rather than in front. So I decided to do it from the back.

What’s next?
I’m working on my new project, Dos au Mur (Back to the Wall). I did a lot of canvas work, with writings of my rap lyrics on the canvas, so the aim is to find a way to link rap music and painting. I don’t know exactly how, but I really like to explore new concepts. I like rap music because I don’t read books – people say I write well and that I should write books, but I like when it’s very straight. A lot of people don’t go to museums, so that’s what I like about street art – it comes to the people. That’s what I like about rap music too – you don’t have to take it word for word, but rather the way people talk and you can make your own interpretations. I like spoken word more than when it’s written – but it could be because my mother comes from theatre so I heard a lot of text. My father is also singing. 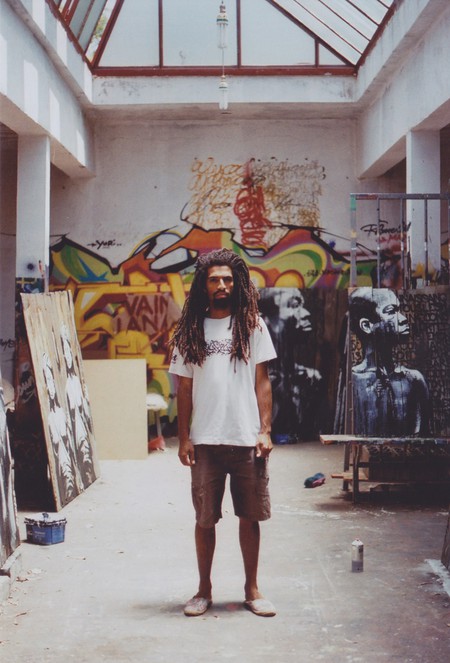 In the studio with Kouka | Photo: Jardin Rouge

Why is art important to you?
I think what is important in art is to be singular, because since you are a child you are told how to be, what to do, to be the same. Boys have to be strong, play football. Girls have to be nice. In art, it’s just to say that I am what I am, and I want to say what I am. So I don’t think I could do anything else. I couldn’t be a doctor or anything. I think a lot of people are not very happy, because they don’t do what they want, but rather what people want them to do. So that’s what I want to say – you just have to be what you are.