Jemaa el Fna Square ©Juan Antonio F. Segal
Decadent design, perfect palaces and intricate interiors, the architectural spaces which house Morocco’s art collections are as endearing as the artworks themselves. From woodwork in Marrakech to multi-cultural centres in Casablanca – discover the top ten galleries in Morocco for contemporary, traditional and iconic artworks.

Amidst the hustle and bustle that clogs Casablanca’s boulevards sits the relatively new Galerie L’Atelier 21. Having only been opened for a few years, L’Atelier 21 is fast becoming one of the best places in which to view the best of contemporary and modern artists with a focus on both emerging and established Moroccan talents. The gallery’s co-owner and art historian Aziz Daki affirms that his gallery is one of the best representations of the city’s increasingly prominent art scene. For Daki, the arts vision that is emerging is a reflection of the cultural interests of King Mohammed VI, an enthusiastic and avid collector of art. Daki elaborates, ‘his passion for the arts has been one of the inspirations for what is now a growing group of Morocco-based collectors.’ L’Atelier 21 represents a collective of fourteen Moroccan contemporary artists and says of the current King of Morocco that ‘he really is one of our art world’s most important role models.’ Their current client list includes artists Narjiss Eljoubari, Hakim Ghazali and Majida Khattari, amongst others and a the gallery hosts a constantly changing display of exhibiting artists. 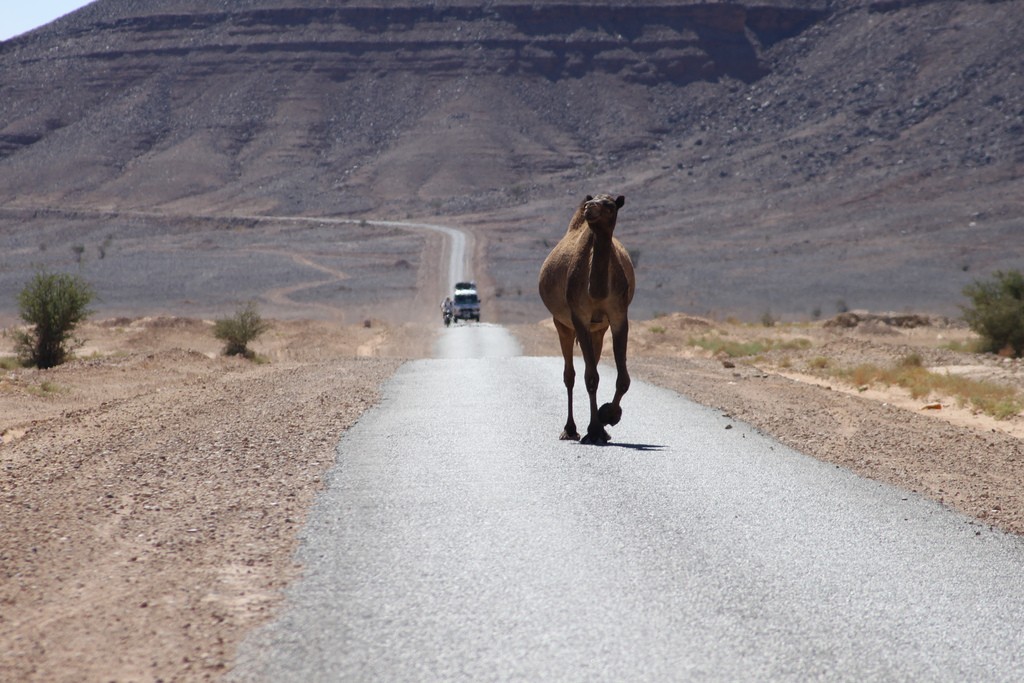 Museum, Building, Mosque
The courtyard garden at the Dar Batha Museum in Fes | ©Cait / Flickr
DarBellarg is a foundation for the protection of Moroccan culture of all genres. The gallery is situated in the heart of the Medina in Marrakech, between the mosque and the Medersa Ben Youssef. It first opened its doors in late 1999, and was founded by Max Alioth, an architect and Susanna Biedermann, an interior designer. The aims of the foundation are to express and promote the living culture that exists within Morocco through thematic exhibitions, concerts, workshops and a cultural programme. The thematic exhibitions are held yearly — 2007 was the year of storytelling through film and 2008 focused on women’s twin traditions of textiles and storytelling. DarBellarg means ‘the storks home’ in Arabic, and the building was originally a fondouk, housing a hospital for birds whose owner cared for storks. Abandoned for thirteen years in a state of ruin, the space was beautifully restored to its authentic decor stucco and wood for the non-profit gallery of Dar Bellarj. Guests are also offered complimentary mint tea as they peruse the art works.
More Info
Open In Google Maps
Medina Marrakesh, Marrakesh-Safi, 40000, Morocco
+212661165979
View menu
Visit website
Visit Facebook page
Send an Email
Give us feedback

Museum
Dar Batha Museum | © Mike Prince
Converted into a museum in 1915, the former summer palace of Moulay Hassan is an elegant Hispano-Moorish building housing the most sumptuous collection of traditional art. Located in Fez — for lovers of art, craft and history the Dar Batha is a must-see attraction. The most traditional forms of art were practical in nature, so expect to see a lot of decorative furniture — from intricately carved wooden furniture, to embroidery, Berber carpets and jewellery. The pottery room contains an unbeatable display of ceramic objects that have been masterfully crafted by Fez craftsmen throughout many centuries. Of particular note are the astrolabes — a variety of fascinating astronomical instruments that were created and perfected by learned Arabs. Not just functional, they are wonderfully decorated with inset jewels and intricately worked metal. With this astounding collection of functional and decorative art, visitors are given a serious visual feast. Not least because of the opulent 19th century architecture — a beautiful piece of art in itself
More Info
Open In Google Maps
5 Avenue du Batha, فاس, جهة فاس مكناس, Morocco
+212535637800
View menu
Visit website
Visit Facebook page
Send an Email
Give us feedback

Art Gallery
Villa des Arts | © ANGE URBAIN / Flickr
Villa Des Arts is one of the most unique and individual institutions of its kind in the whole of the Islamic world. It stands as one of the largest museums in Casablanca, and the first private one in the country. Situated between the Mäarif quarter and a peaceful Arab League Park, the sublime building is home to several exhibitions featuring works of contemporary Moroccan artists. In recent years, it has developed the space into a full blown museum of modern art. The museum features a staggering eight hundred artworks in permanent exhibitions, along with temporary exhibitions annually by both international and local contemporary artists. The Villa Des Arts is also a part of the ONA Foundation, one of Morocco’s primary cultural foundations. The Foundation’s primary aim is to promote creativity and culture within the country. An example of pure art deco style, the Villa Des Arts was built in 1929, and expertly refurbished in 2006. All year round it presents a mix of exhibitions, concerts and cultural events to Casablanca locals and to tourists alike.
More Info
Open In Google Maps
10 Rue Beni Mellal, Quartier Administratif Rabat, Rabat-Salé-Kénitra, 10010, Morocco
+212644043614
View menu
Visit website
Visit Facebook page
Send an Email
Give us feedback

The Dar Si Said Museum is a decadent 19th century palace in Marrakech that houses the very quintessence of Moroccan art. The entrance is captivating with the juxtaposition of the Spanish and Moorish splendour of the palace with the white walls. As you arrive, the ground floor is home to many clothes, objects of beaten copper and Berber jewellery. Not necessarily things of the past – many of the objects on display are still used and worn in the mountain areas of Morocco. Along with objects that preserve the Moroccan culture, the Dar Si Said places special appreciation upon the art of woodwork, which recognised the decorative and religious arts of south Morocco. As the visitor moves from room to room within the palace, they are confronted at all angles with a spectrum of extravagant furniture – from pillars, balustrades and the famous moucharabiehs. Flowers, arabesques and calligraphy are carved, cut out or painted on geometric furnishings, with finely worked wood also being the norm for even the most everyday items.

Museum
© btravel / Alamy Stock Photo
One of the most fascinating museums in North Africa, the Musee Tiskiwin, is housed in a beautifully restored Moroccan riad between the Bahia and Dar Si Said Palaces. It showcases an unusual array of North African arts and crafts that chronicle the region’s vibrant cultural history. The visitor is offered a journey through the private art collection of Dutch anthropologist Bert Flint – with each room representing a region of Morocco with indigenous crafts. The collection has been amassed by Flint, who has resided in Marrakech since 1957. Each room of artefacts marks a different spot along the ancient Saharan trade route — from Marrakech to Timbuktu. A colourful assemblance of objects are on display, from exquisitely hand-woven carpets, to traditional Berber clothing and tribal handicrafts – many of which were bought from the legendary souks of Marrakech and preserved by Flint. Open daily, Maison Tiskiwin offers some of the best Moroccan art and sculpture to be seen in the country.
More Info
Open In Google Maps
8 Rue de la Bahia, Médina Marrakech, Marrakech-Safi, 40000, Morocco
View menu
Visit website
Visit Facebook page
Send an Email
Give us feedback

The Museum of Marrakech is one of the largest museums in North Africa and is situated in the old centre of Marrakech. Housed in the Dar Menebhi Palace built at the 19th century by Mehdi Menebhi, it was carefully restored by the Omar Benjelloun Foundation and made into a museum in 1997. A stunning example of 19th century Moroccan architecture, the museum is visited just as much for its architecture as for its contents. The Museum of Marrakech possesses the most extensive collection of Moroccan art which reveals not only the modern culture of the country, but also its history. The house itself represents a fine example of classical Andalusian architecture, with fountains in the central courtyard, detailed tile-work and carvings. Several features of the original courtyard, including the mosaics and floor-set basins have been retained. The museum holds exhibits of both contemporary and traditional Moroccan art, along with examples of historic books, coins and pottery of Moroccan, Jewish, Berber and Arab cultures.

Building, Museum
Musée Berbère du Jardin Majorelle | © Viault / WikimediaCommons
Book Now
In the vast and stunning garden of Jardin Majorelle, sits the Musée Berbère. For the first time in Morocco, the museum exclusively displays a collection of Berber objects originating from the diverse regions of Morocco — from the Rif to the Sahara. With a floor space of over two hundred square meters, the museum displays more than six hundred objects, creating a compelling panorama on Berber culture in Morocco. Under four thematic rooms — ‘The Berbers’, ‘Traditional skills’, and ‘Jewels’ and ‘Finery’, visitors can feast their eyes upon an array of artistic objects. The shop is also an art gallery, with a large selection of old photographs, drawings, watercolours and engravings from the 18th and 19th centuries. Carefully handpicked by Patrick Martin, who headed the department of Books and Manuscripts at the auctioneers Christie’s for seventeen years. His criterion of choice is highly specific: everything that is shown in the gallery must have a connection with Morocco, the countries of the Islamic world or Africa. Aside from the exceptional art collection, the garden is an attraction in its own right. In 1980 fashion icon Yves Saint Laurent and his partner purchased the home and spearheaded major restoration to the grounds. In 2001, Saint Laurent created a foundation what would protect and maintain the garden for years to come. The grounds are wonderfully maintained and are a perfect tranquil accompaniment to the museum.
More Info
Open In Google Maps
Marrakesh, Marrakesh-Safi, 40000, Morocco
+212524385721
View menu
Visit website
Visit Facebook page
Send an Email
Give us feedback

Art Gallery, Building, Library
Matisse Art Gallery | © Naoya Wada/Flickr
Launched in 1999, the Matisse Art Gallery is one of the oldest galleries in Marrakech and specialises in solo shows by young Moroccan artists in Marrakech. Along with emerging artists such as calligraphy painters like Nouredine Chater and Noureddine Daifallah, more established names have exhibited here such as Farid Belkahia and Hassan El-Glaoui. Seeking to promote Moroccan Art, the Matisse Gallery showcases works by young artists giving them an opportunity to publicise and develop their work. With regular publication of catalogues and artist monographs, the gallery participates greatly in the public outreach towards the art scene in Morocco. Hidden in an alleyway in an old aristocratic villa, the Matisse Art Gallery offers its private collections for viewing to both the local public and international visitors. With over twenty five names in its current list of artists exhibiting and free admission, it is definitely worth a visit.
More Info
Open In Google Maps
Marrakesh, Marrakesh-Safi, 40000, Morocco
+212524448326
View menu
Visit website
Visit Facebook page
Send an Email
Give us feedback

Galerie 127 is one of the more unique art galleries that Marrakech has to offer. This endearingly simple loft space — a converted apartment with tall windows and the walls left bare and unfinished is part of the gallery’s attraction. Opened in February 2006 by Nathalie Locatelli, it became the very first photo gallery in the Maghreb and only the third in the whole African continent. Locatelli represents more than thirty photographers at any one time, at the gallery’s white-washed walls are filled with sensational contemporary travel images from Moroccan and international photographers. Highlights have included portraits by Gérard Rondeau and Carole Bellaiche, Bernard Faucon’s ‘staged photography’ and Alejandra Figueroa’s images of ancient statues. Galerie 127 also operates a series of photography workshops. From the introduction of photography to its invention of contemporary images, these sessions endeavour to discover both its purpose but also its iconographic and political responsibility within society.