An Alternative Guide to Casablanca 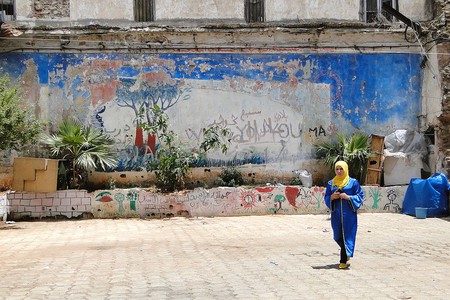 Casablanca is the biggest city in both Morocco and North Africa. The economic heart of the country, famous attractions include the striking Hassan II Mosque, the beaches and the old medina. In general, Casablanca sees fewer visitors than other popular hotspots, such as Marrakech, Essaouria, Agadir and Tangier. Here are some recommendations for going even farther away from the typical tourist trail and uncovering some of the city’s lesser-known places.

Soco de Moina is located in the Hay Hassani part of the city. A large second-hand market, it’s a great place to unearth some unusual items. Old furniture stands next to the jumbled stalls. Trinkets and knickknacks cover the tables. Used clothing and footwear display designer names, people check if electrical goods still work and dusty books can be found among the diverse items.

Although small, the cream and reddish-orange walls of Musee Abderrahman Slaoui are covered with interesting artwork. The founder’s love of art is clear to see as you appreciate his collections. Signs are provided in Arabic, French and English. A relatively unknown museum in Casablanca, don’t be surprised if you are one of the only visitors.

See a Gruesome Side of Art at the Transcultural Slaughterhouse

One of the most unusual art spaces in Morocco, the Transcultural Slaughterhouse is housed within a former abattoir. The artworks are interesting in their own right, but the meat hooks hanging from the walls and the stained floors add a certain unusual quality to the art gallery. Look out for the works that stick with the slaughterhouse theme.

L’Atelier 21 contains interesting modern pieces of art, with works mainly by Moroccan artists. Displays change frequently, meaning that you can visit several times and still find something new to capture imagination and leave an impression.

Casablanca’s Corniche is one of the city’s major attractions. After strolling along the promenade, most seaside-loving visitors head to the public beaches of Lalla Meryem or Ain Diab. For the atmosphere of a Moroccan beach holiday, head to Plage Madame Choual instead.

Wander Around the Large Hermitage Park

Escape the hustle and bustle of city life for a few hours with a trip to the peaceful, clean and green Hermitage Park. Well-maintained pathways lead you through the leafy park, and you’ll see people sitting and relaxing in the shade and getting in some exercise with a jog. The colourful flowers and shimmering pond attract an array of insects, birds and butterflies.

Another patch of greenery in Casablanca, Parc Isesco Murdoch is popular with those who want to stretch their legs with a walk or get the blood pumping by running, jogging or cycling. Couples sit in the shade to chat and kids run and play.

Temple Beth-El is one of the main Jewish places of worship in Casablanca. Refurbished in 1997, the large synagogue is also one of the city’s most attractive Jewish institutions. The colourful stained glass adds to the appeal, and the interiors feature a large chandelier, religious décor and ornately embroidered mantles that contain sacred scrolls. Do note that you will need to make advance arrangements if you want to look inside.

There are several Sufi shrines and monuments around Casablanca, though non-Muslims are not permitted inside. You can also admire various mosques, such as Jerusalem Mosque, from the outside, as well as Jewish synagogues, like Ettedgui Synagogue. There’s lots of colourful street art to admire as you explore too.