A Brief History of the Saadian Tombs in Marrakesh 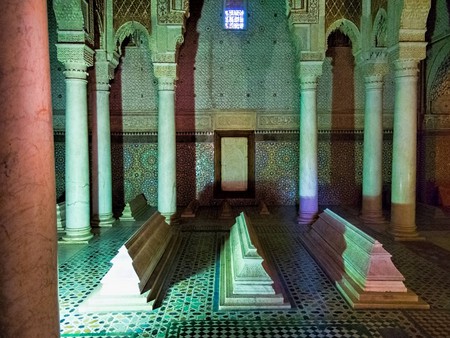 One of Morocco’s former imperial capital cities, Marrakesh is home to many historic attractions and interesting museums. Indeed, the Red City is often said to be the country’s cultural heart. Marrakesh was the capital during both Almoravid and Saadian eras, and legacies from each dynasty can be seen around the city. Highlights include the old and high red-coloured walls of the medina with the numerous entry gateways, the now-ruined Badi Palace, the opulent Bahia Palace, the Ben Youssef Madrasa and the former resting place of royalty, the magnificent Saadian Tombs. Keep reading to learn more about the stunning Saadian Tombs.

Sultan al-Ghalib Abdullah constructed the first tomb to contain the body of his father and the founder of the Saadian empire, Mohammed ash-Sheikh. The first leader of the Saadian dynasty died in 1557. The site was chosen due to its proximity to the important Kasbah Mosque, which dates back to the 1100s. The mosque is the largest Islamic place of worship in Marrakesh. Burials may have taken place in the area prior to this, but the sultan was responsible for turning it into a royal graveyard.

Sultan Ahmed el Mansour, the fifth and final Saadian ruler, was later responsible for the construction of many of the major buildings within the complex of the Saadian Tombs. He wanted to construct beautiful memorials to honour the lives of those close to him and, of course, create a spectacular place of rest for when his own death occurred. While he did undertake work to beautify earlier tombs, his own tomb was the most impressive.

He built lavish mausoleums in equally opulent structures. Materials included imported Italian marble and gold, with eye-catching tilework, known as zellige, plasterwork and woodwork. The entire complex radiates beauty. People who the sultan held in greater esteem were buried closer to the heart of the complex, with others buried throughout the extensive gardens.

Interestingly, the complex contains the graves of several Jewish dignitaries, some of whom were given higher-ranking positions in the graveyard than the sultan’s wives!

The graveyard was in use from the 1550s to the end of the Saadian dynasty in the mid 1600s. 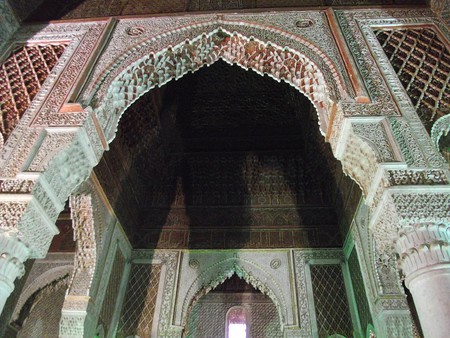 There are 66 tombs between the two mausoleums, containing princes and other prominent figures.

The gardens have even more tombs in various states of beauty and detail. Decorative and colourful tiles and Quranic inscriptions are common embellishments. Many of these outer-lying tombs contain the remains of royal wives, advisers to the sultan, and other people who were important to the ruler. The gardens contain more than 100 tombs. A striking tomb dedicated to Sultan Ahmed el Mansour’s mother takes pride of place in the centre of the courtyard. 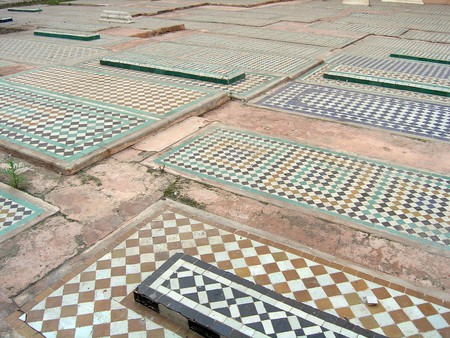 Graves with colourful tiles through the gardens | © seier+seier / Flickr

Decline of the Regal Site

The Arab Alaouites took control of the country, and moved the capital to Fes. Several significant sites were dismantled, with the riches moved to the new royal city. The Saadian Tombs were spared however, perhaps for superstitious reasons. Although the new ruler Sultan Moulay Ismail did want to remove traces of the former ruling family, and so he sealed the tombs, hiding them form view. Just one entrance remained open, a small and hidden passageway from the neighbouring Kasbah Mosque.

The tombs were forgotten and nature ran its course, with weeds, stray cats, and storks taking over the complex. From the latter part of the 17th century to the early 20th century, the tombs were left undisturbed. Aerial photographs revealed the existence of the tombs to the world in 1917, and the site was subsequently cleared and cleaned, allowing visitors to enjoy the site in its full splendour from times gone by. 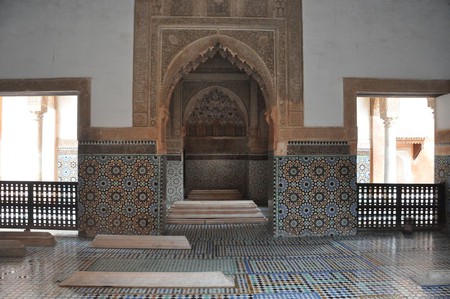 Interior details at the Saadian Tombs | © Wikimedia Commons
Give us feedback