A Brief History of Tanjia, a Local Dish from Marrakesh 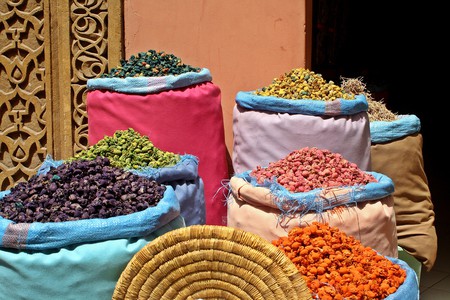 Spices in a Marrakesh souk, an essential ingredient in tanjia | © Eden G / Flickr

If you’re visiting Morocco’s fascinating city of Marrakesh and your stomach is already rumbling at the thought of delicious Moroccan food, there’s one dish you definitely shouldn’t miss: tanjia. Local to Marrakesh, it can be difficult to find tanjia elsewhere around the country. Here are the basics you need to know.

What is a tanjia?

Don’t confuse tanjia with tajine, the famous dish enjoyed all around Morocco. Tanjia and tajine are completely different. The one similarity these two meals have in common, however, is that they both get their names from the pots they are cooked in. A tanjia pot is a tall, jug-like clay pot that closely resembles a Greek urn.

Tanjia is a meat-lover’s dream! Beef is the most commonly used meat today, but lamb and chicken may also be used. In times gone by, camel was sometimes cooked in a tanjia. When prepared in the traditional manner, tanjia has a distinct lack of vegetables. The rich flavor comes from the addition of various herbs, spices, and preserved fruits, such as garlic, saffron, cumin, salted lemon, and turmeric. A drop of water, a splash of olive oil, and a dollop of smen (an oily, salty type of butter, similar to ghee) is all that’s left before setting a tanjia to cook.

Tanjia is a very male-oriented dish. Indeed, it’s often referred to as the bachelor’s dish because of its strong associations with men. Even today, it is usually the men of a family that make tanjia.

Tanjia has strong connections with Marrakech’s huge souks and trading heritage. In the past, men who worked in the souks would have Fridays free. To enjoy their free time, they would often head to the city’s parks with fellow souk traders to chat, relax, and enjoy a picnic. The main part of the picnic was the easy-to-make tanjia. The basic ingredients and simple cooking method meant that men, used to women taking care of most cooking duties, could prepare the meal with ease.

Homemade Tangia Marrakchia 🐞 Yum ! Do you know this traditional way to cook meat during at least 4/5 hours inside an earthen jar ? We’ll it is perfectly delicious and if you’re in Morocco do not forget to taste it 🌴 #homemadefood #realfoodlover #farmlifestyle #farmlife #realfood #tangia #marrakech #maroc #morocco #2016 #yummy #yum #marrakechfoodtour #instafood #instayum #holiday #endoftheyear #sunnyday A post shared by A d j i l a B. (@adjilabenlolo) on Dec 30, 2016 at 11:29am PST

The men didn’t even need to light their own fire to cook tanjia – they simply took their filled pot, which was taken care of by the local butcher, to the hammam! Burning coals heat the hammam’s water. The tanjia pots were handed over to the bathhouse workers to be cooked in the hot embers and ash for at least a few hours. Typically, men would take their tanjias to the hammam on a Thursday evening, ready to collect on Friday morning after it had been cooking slowly overnight. There really was minimal effort involved.

This man is cooking the traditional #Tangia dish while overseeing the fire that fuels one of the oldest hamman spas in #marrakech A post shared by Ivan Sidorjak (@sidorjak) on Mar 17, 2017 at 4:59pm PDT

Today, visitors to Marrakesh can order tanjia at several restaurants and stalls around the city. They are cooked in advance. Alternatively, for an authentic Marrakshi experience, rent a tanjia from a neighbourhood butcher. The butcher will prepare the meat and spices in the pot before tightly tying a paper lid over the top. You can then head to the nearest public hammam, your tanjia pot in hand, and pay for it to be cooked in the furnace. Simply collect your pot later on, untie the lid, serve, and enjoy with bread and a glass of mint tea.