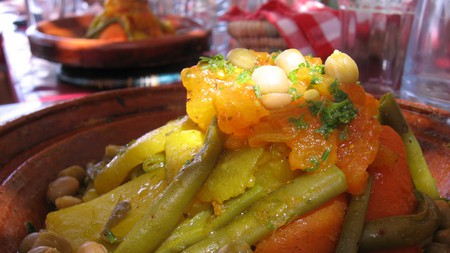 A close-up shot of a traditional tagine in a Moroccan restaurant | © 16:9clue / Flickr

There’s certainly no shortage of delicious food around Morocco. Traditional Moroccan cuisine has influences from the country’s two major ethnic groups, the Arabs and the Berbers; as well as from the once-large Moroccan Jewish community, neighbouring African nations, and the gastronomy from former colonial powers. International restaurants can also be found in most major cities. Give your taste buds a treat and visit some of the top restaurants around Morocco.

You’ll find the top-class La Grande Table Marocaine within the decadent Royal Mansour Hotel in Marrakech. The establishment is owned by the Moroccan king so you can be assured of stunning surroundings, delectable dishes, and excellent service. La Grande Table Marocaine is one of three restaurants in the hotel, and operations at each are overseen by a renowned French chef, Yannick Alléno. One of the finest restaurants in Morocco for high-class Moroccan fare, recipes combine long-standing culinary traditions with modern twists.

Menu items include mechoui-style (grilled) veal and lamb, various couscous dishes, rabbit, pigeon, or seafood pastilla, a seafood platter, and a wide selection of salads. Tagines include chicken and lemon, seafood, sea bass, king prawn and lamb. You can also sink your teeth into a beef tangia, a local Marrakshi speciality.

A modern restaurant with a peaceful and leafy courtyard, Latitude 31 is another top restaurant in the Red City of Marrakech. You can also choose to dine on the roof terrace if you prefer. The restaurant blends traditional cooking techniques with fresh, modern touches, bringing diners innovative Moroccan dishes. A rather rare delight in a country that focuses largely on meat at mealtimes, Latitude 31’s menu contains a large number of vegetarian dishes in addition to meaty favourites.

The restaurant’s signature dish is a tagine with mushrooms sourced from Immezour. The establishment also serves the local dish of beef tangia. Roasted sea bass with risotto, seafood tagine, a mixed grill with herbs from the Atlas Mountains, couscous and ravioli are a few of the mouth-watering items you’ll find on the menu.

Best food we’ve had in all of Morocco hands down! Presentation on point ? #foodporn #kiwiandkraut #fulltimeworldtravellers #morroco #africa #latitude31 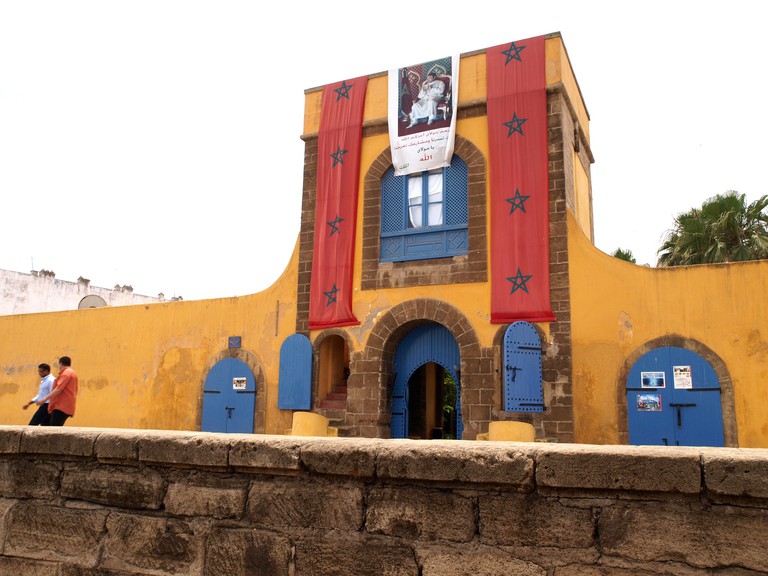 The entrance of La Sqala | © mararie / Flickr
La Sqala is a refined restaurant in the remains of the old Portuguese fortress on Casablanca’s coast. Dine on fresh and tasty seafood while enjoying the breeze in the green and leafy garden, or head into the air-conditioned dining room and admire the views through the large floor-to-ceiling windows. Although famous for fish and seafood, La Sqala also serves an assortment of Moroccan cuisine, including tagines, brochettes and pastries. Order a pot of mint tea and relax in the unhurried and welcoming atmosphere. 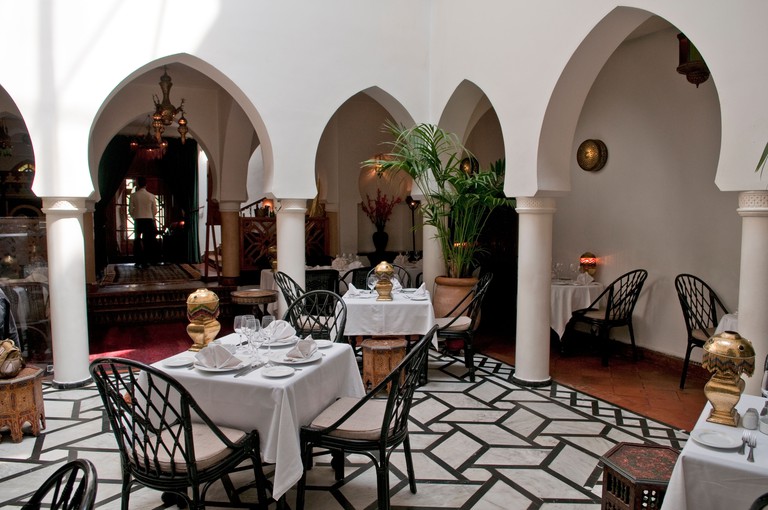 Rick's cafe, Casablanca | © raphael salzedo / Alamy Stock Photo
Don’t be fooled by the name; Rick’s Café is much more than a humble café. It is something of a Casablanca institution. Opened by an American lady who previously worked as a diplomat, the venue aims to replicate the ambience and romance of the famous black and white movie named after the Moroccan city. Live piano music tinkles through the air interspersed with old American classics, and Casablanca (the movie) plays on a loop upstairs.

Housed within a traditional riad, the elegant décor features balconies, leafy plants, beautiful woodwork and tiling, graceful arches and an attractive bar. The menu features Moroccan favourites and international dishes. Seafood dishes are popular. Tuck into tagines, grilled steaks, burgers, the signature goat’s cheese salad and more. Do be sure to make a reservation as it’s an incredibly popular spot among tourists.

Bar, Restaurant, French, Mediterranean, $$$
Facebook
Email
Twitter
Pinterest
Copy link
Share
Map View
Board Le Dhow, a vintage boat that’s moored on the Bou Regreg River in Rabat, for an atmospheric meal with lovely views. Seating is available in various outdoor and indoor areas, including in an Indonesian-style salon and at the VIP’s Captain’s Table. Depending on the time of day, DJs, live music or karaoke may accompany your meal. The restaurant serves authentic French cuisine, as well as a selection of lighter bites. Options include smoked salmon, pizza, foie gras, oysters, pasta, salads and fish. There’s a wide selection of desserts and drinks too; why not retire to the deck for cocktails or a glass of Moroccan wine after your dinner?

Rabat’s Matsuri is a top choice if you’re craving authentic Japanese cuisine while visiting the Moroccan capital. The restaurant makes full use of the abundance of fresh fish and seafood caught around Morocco’s long coasts. Practice your chopsticks technique as you savour the delicious flavours straight from the conveyor belt. The diverse sushi and sashimi are stars of the restaurant, and other delights include miso soup, tempura, steak, grilled fish, teriyaki and more. The restaurant also has branches in Casablanca and Marrakech.

If you find yourself close to the Algerian border in eastern Morocco’s largest city of Oujda, you can’t miss eating at Restaurant National. One of, if not the most, popular restaurants in the city, it attracts many locals and visitors. Dishing up typical Moroccan fare, such as tagines, fried fish, brochettes and salads, it follows the national tradition of serving huge dishes of steaming couscous on Fridays. The delicious flavours of the Mediterranean can also be enjoyed, and the rotisserie chicken is sure to satisfy your hunger.

Located at the bustling heart of Fes’s medina, Darori Resto is an excellent choice for Moroccan and Middle Eastern gastronomy. Housed within a glorious riad, colourful tilework, ornate carvings and other decorative touches adorn the walls and floors. The elegant furnishings, gorgeous rugs and beautifully presented dishes help to create a wonderful dining experience. Staff members are welcoming, friendly and helpful. The set meal is a good way to sample an assortment of Moroccan dishes, including salad, pastilla, tagine, fresh fruit and tea. Of course, you can also order from the a la carte selection too.

Restaurant, French, Seafood, $$$
Facebook
Email
Twitter
Pinterest
Copy link
Share
Map View
La Scala is one of the most upmarket fish and seafood restaurants in the popular beach resort of Agadir. The extensive menu boasts two pages that are solely dedicated to bounties from the ocean, though other fare, like steaks and pasta, are also available.

Examples from the menu include tuna with wok-fried vegetables and a fruity salsa, BBQ sole, grilled salmon with steamed vegetables, grilled lamb, and chicken teriyaki brochette with rice and vegetables. If you’re hankering after traditional Moroccan tastes, you can feast upon classics like seafood pastilla, beef, fish, or chicken tagine and crisp Moroccan salads.

Tangier’s Le Souq is a relatively new restaurant, having first opened its doors in December 2016. It prides itself on serving flavourful authentic dishes from the Middle East, and you’ll also find a good selection of dishes from Asia and Andalusia. There’s certainly plenty to tempt you! Lebanese kebabs, Japanese sushi, Indian biryanis and breads, Arab-style soups, Syrian falafel and Saudi Arabian lamb with rice are just a few dishes to choose from on your culinary journey. Interestingly, the restaurant also has a branch in Rotterdam, the Netherlands.