10 Moroccan Musicians You Need to Know 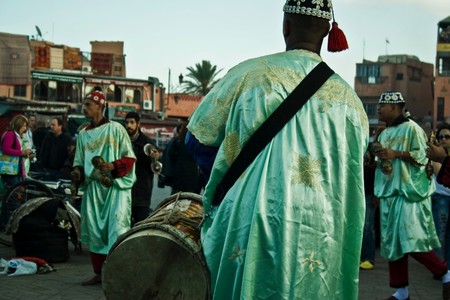 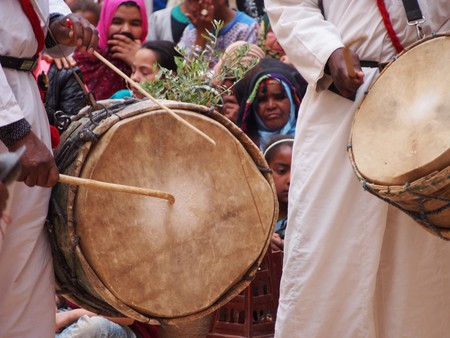 Malika Zarra is a Moroccan multi-instrumentalist of Berber origin. Zarra is a trained jazz musician having studied in France before settling in New York. Her music fuses different Moroccan musical traditions including Berber and Gnawa with jazz. She sings in multiple languages and uses different vocal styles as well as traditional chanting and harmony to create a rich texture in her music.

The Master Musicians of Joujouka are a sufi band from Northern Morocco. They are known for having recorded with many European and North American artists such as Brian Jones. Their music is intended to cause a form of trance through repetitions of melodies that weave in and out of one another. The central focus of these songs is attention to variations of rhythms in percussion and the interlacing flutes.

Born in 1924, Toulali was a Malhun musician who once worked in a market where Malhun was popularly played. His music is the traditional Malhun style with spoken and sung poetry interspersed with musical verses that build with amassing instruments over the course of the song. Later in his life, after studying the Andalusian influences of Malhun closely, he opened his own school.

New York-based musician Hassan Hakmoun plays different styles of Gnawa music. Some songs feature a whole band with electric guitars and a drum kit while others stick to the traditional krakeb percussion and repetitive chants. Hakmoun is respected as a legend of Gnawa music with its mystical and trance traditions, but is also versatile in his musical exploration. He also lends his music to rock and jazz influences, even featuring remixes of his tracks.

Hailing from Taroudant in Morocco, Nassouli is an upcoming Gnawa star who has played a host of renowned jazz and Gnawa festivals. Now living in Agadir, Nassouli, who is of Berber origin, has recently experienced a big break after playing at the Essaouira with Nneka (the vocalist behind the hit “Heartbeat“), despite neither of them sharing a common language. Nassouli’s collaboration with other genres, such as hip hop, is lending him a wealth of followers.

Zohra Al Fassiya was born in 1905 near the ancient city of Fez and was one of the first female recording artists in Morocco. She came to be known as a star of Malhun – sung poetry accompanied by various Andalusian and Moroccan musical styles. Malhun originally started as a purely literary form in the 16th century and was later turned into a musical form. At the height of her career, Fassiya played with her own orchestra and was invited to personally sing for the King of Morocco. Fassiya’s music is known for its bold vocals and liveliness.

Maghnaoui is a singer and connoisseur of Rai, a form of North African folk music traditionally sung by poor men, commenting on social issues such as European colonization. Maghnaoui wields a livelier style than other Moroccan folk music, featuring more up-beat percussion and more dynamic melodies. Although his career began in the 1960s, he is still producing music.

Best known for her song Hadi Kedba Bayna, Najat Aatabou plays Chaabi music. Often sung by young men in poverty commenting on social issues such as European colonialism, Aatabou’s brand of Chaabi incorporates her own feminist concerns. Her songs deal with the themes of being a woman in Morocco and the issue of infidelity.

Similar to Hakmoun, Mahmoud Guinia is considered a master of Gnawa music. Guinia plays the Hejouj and fronts a band where he leads the rhythm and chanting. Guinia has recorded internationally and participated in Boiler Room sessions, often reserved for electronic and hip-hop artists. Guinia’s music is more traditional than Hakmoun’s and focuses on maintaining the long, trance-like rhythms.

Born in 1951 in rural Morocco near Taroudant, Mbarek is revered for reinvigorating Berber music. The music involves traditional melodies played with rock instruments, as well as some Moroccan instruments. Elements of reggae and LAtin sounds are infused in the music as well. Mbarek has been a recording artist since the 1970s and has recorded as recently as 2006. His music is often upbeat with harmonious chanting.