An Introduction to Accra's Fantasy Coffins 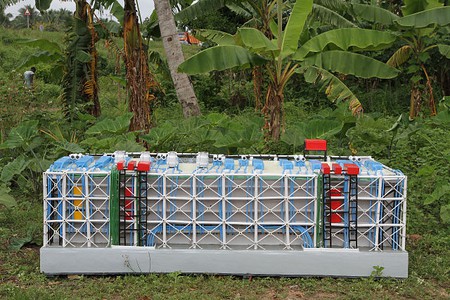 It’s been about six decades since Ghanaian artists, specifically Ga craftsmen living on the coastal stretch from Nungua to Labadi, started carving out a niche for themselves as spectacular casket makers. Their passion is to construct funerary boxes which vamp people into rethinking the enigma of death as an inseparable, primary and heartily memorable point in life’s circle.

In Ga language, fantasy coffins are called abebuu adekai, meaning proverbial boxes, or coffins. It might take up to three months for the artists to re-engineer the method and aestheticism that comes with carving coffins used for the last rites of the deceased. Nonetheless, their works come to replace the stoic mahogany pine boxes with brass handles and whimsical hand-carved sculptures. Their pieces might be short-lived and go into the ground right after building, but sometimes they get ritually paraded and even end up being collected and exhibited as art.

During funerals at the Greater Accra coasts, dancers, musicians and funeral criers ululate and careen to jama – the local Ga mixed with Pidgin English folk singing with hand drums and bells. The traditional Ga expression of radiance to usher away the departed is remarkable, and you might come across pallbearers toting a colorful sculpture of a beer bottle, microphone, lobster, salmon, camera, airplane, or rice sack coffin. 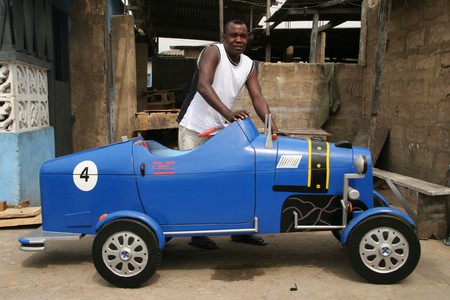 The Kane Kwei (1924-1992) workshop, which is pinned between a barbershop and a clothing store in Teshie, ships up to 100 coffins annually to Ghanaians living abroad, as well as foreign collectors.

The origin of the trade is linked to the story of one Ga traditional leader who ordered for a sculpture in the form of a cocoa pod. This leader passed away shortly after, and the furniture was converted into a coffin for the funeral. Kane Kwei followed this up with a coffin in the shape of an airplane for his grandmother, whose dream was to have a flight experience. 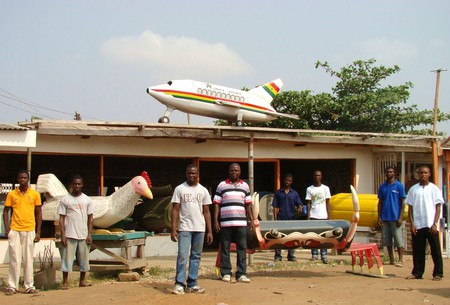 ‘I chose to work to maintain my grandfather’s story’

Eric Adjetey Anang, Kane Kwei’s grandson, started being of service at the workshop at the age of eight. In 2009, his work was featured in Coca-Cola’s Aquarius TV advert. He has shown work in Dakar, Milan Design Week, and the Royal Ontario Museum, but one of his most popular statements was in 2014, when he built a fish casket and stuffed it with plastic to speak to Philadelphia’s waste issues. At a University of Madison residency, Anang addressed America’s gun violence with a gun-shaped piece. 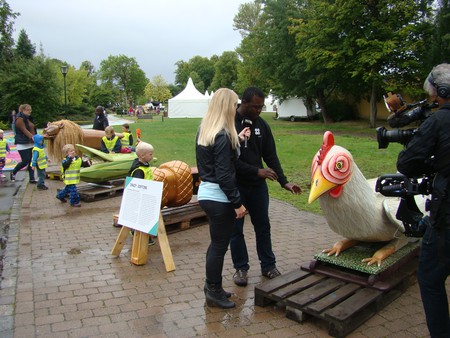 Joseph Ashong, AKA Paa Joe, was an apprentice at his uncle, Kane Kwei’s studio when he was a teenager. In 2014, his coffin in the shape of a Porsche made a mark at a London auction by closing off at USD $9200. In 1976, Paa Joe used his startup to train the likes of Daniel Mensah (AKA Hello), Eric Kpakpo and Kudjoe Affutu, who took off with their own thriving funeral furniture establishments.

Today, the 70-year-old – who has been described by The Independent as ‘the man who puts the fun into funereal,’ and by East End Film Festival as a ‘grandfather of the fantasy coffin trade’ – has had his whimsical wood-carvings bought by US presidents, while a video made about him to tell his story was acquired by Amazon as part of 40 films screened at the 2017 SXSW Film Festival. 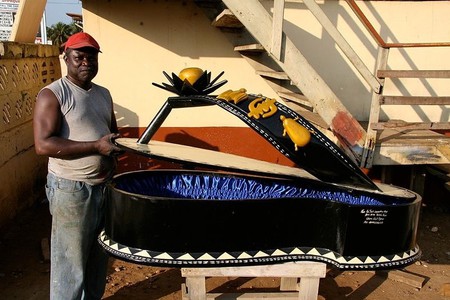 How a career crafting resting places for the dead insufflates life

Father and son now become master and apprentice, as Paa Joe’s son, Jacob Tetteh-Ashong, considers the master craftsman’s career a path to tow, building their bond with a family business. Jacob stated in a BBC interview that, though it’s a difficult job, especially with the carving process, he’s garnered much mental strength to be a reliable hand.

In the same direction, Kane Kwei’s grandson, Anang, now manages the Kane Kwei workshop, where normal coffin sculptures intended for burial cost about USD $1000, while the mahogany-carved art gallery pieces are marked at about USD $3000. It’s more than just a revolutionary casket industry – there are family connections and astonishing stories here.