Where to Find Tutankhamun’s Treasures 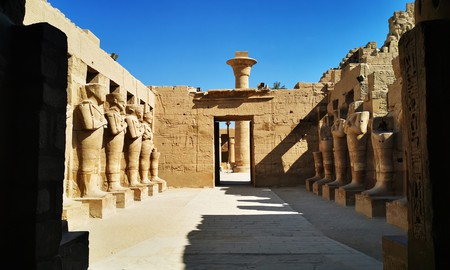 The discovery of Tutankhamun’s tomb sparked a global fascination with ancient Egypt. Today, you can explore the many wonders the country has to offer by descending into cramped burial chambers, traversing endless deserts and climbing the pyramids themselves. These exhilarating experiences are all part of finding Tutankhamun’s treasures for yourself.

Planning a grand Egyptian treasure hunt? Join our small-group tour of Egypt for an experience that leads you off the beaten track and down the Nile – but not before the chance to lay eyes on King Tut’s tomb, with our Local Insider on hand to provide expert insight. 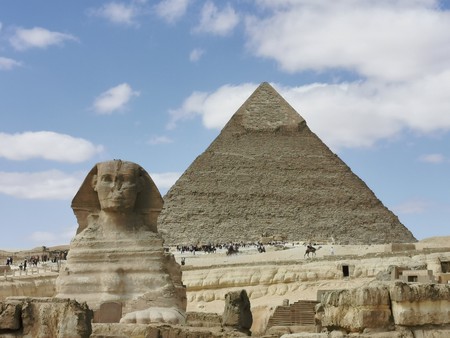 Many original artefacts from the tomb can be found across Egypt, while others are on tour around the world. Here is Culture Trip’s guide to everything you need to know about the “boy king”, and where you need to go to explore the secrets surrounding the most famous archaeological find of all time.

Egyptologists have long agreed that Tutankhamun has a somewhat rock-star status among the pantheon of pharaohs of ancient Egypt because of the state in which his tomb was found. Aside from a couple of failed attempts by grave robbers to enter the tomb before Howard Carter’s monumental discovery in 1922, no one else had entered the young pharaoh’s death chamber since it was first sealed in 1325BCE. As well as the mummified remains of Tutankhamun, Carter found amulets of gold, carved sculptures, religious symbols and thousands of other items.

Today, many of the artefacts that were described by Carter as “wonderful things!” when he first peeked inside the tomb are scattered around Egypt and beyond.

The Valley of the Kings

Tarek El-Awady, an experienced archaeologist, curated an exhibition, Tutankhamun: Treasures of the Golden Pharaoh, that went on tour – it was the last time they would go on display around the world before being permanently installed in the new Grand Egyptian Museum (GEM) in Cairo, due to open in late 2021.

El-Awady tells Culture Trip more about the impact of the original find: “Carter’s discovery of the intact tomb of Tutankhamun in 1922 proved that the statement by an American adventurer that ‘there was nothing left to be discovered in the Valley of the Kings’ was not true.” El-Awady has worked on excavation projects around the pyramids of Giza and Saqqara before becoming the director of the Egyptian Museum in Cairo. His latest exhibition will tour 10 cities and continue the frenzy around Tutankhamun that was once so prevalent it was even labelled Tut-mania. 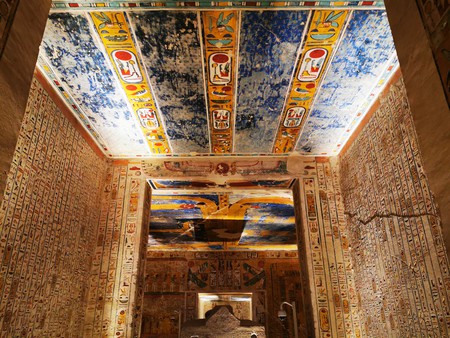 The colours in this tomb are entirely original, with some dating back more than 4,000 years | © Cassam Looch / Culture Trip

“Although he only spent a decade on the throne, Tutankhamun was buried with over 5,000 artefacts, from tiny objects such as arrowheads to complete racing chariots,” says El-Awady.

When visiting the Valley of the Kings, you get a real sense of the importance of the mighty Nile to life in ancient Egypt. The river is still crucial to life in the country today, of course, but in the time of the pharaohs, almost every aspect of daily life was centred around the life-giving properties of one of the longest waterways in the world. Even Luxor (where the Valley of the Kings is located) was full of crocodiles and hippos, although the building of the Aswan High Dam between 1960 and 1970 has seen the deadly creatures remain farther upstream.

The flow of the Nile is also crucial, and oddly, Luxor in the south of Egypt is considered to be part of Upper Egypt. Areas to the north are referred to as “lower”, and it’s all due to the flow of the river, which runs from south to north. Its location also explains why the Valley of the Kings was chosen as the burial place for many of the ancient rulers of Egypt. The region is to the west of the Nile, where the land is far less fertile than the east. The valley also leads straight into the vast deserts of the Sahara and is difficult to access. In ancient Egypt, it was considered a secret place, hidden away.

Sadly, grave robbers found the valley and stole many of the treasures inside the tombs, but there was one notable exception – Tutankhamun’s. 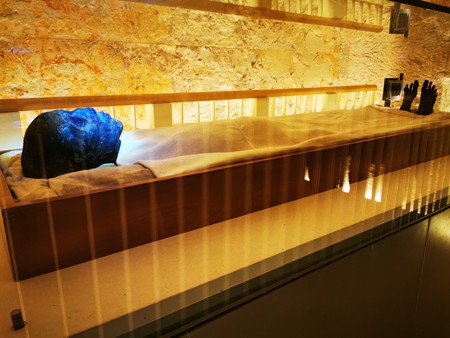 Tutankhamun’s tomb is actually one of the smaller ones found in the Valley of the Kings. Its construction was likely rushed because the king died so young. Some scholars are convinced he was murdered, whereas others believe that he died of natural causes.

Either way, entering the tomb today is an exhilarating experience. The mummified remains of Tutankhamun greet you in the main chamber, which is found after passing through a narrow passage. They have remained in place ever since he was first buried. You get a real sense of the adventurous spirit that gripped so many turn-of-the-century explorers, and the atmosphere can be overwhelming. The intense heat and blinding light of the desert surrounding the tomb are juxtaposed with the pitch-black passages at the entrance of the sandstone chambers. The walk into the tomb is also a journey back in time to when it was first revealed.

“Tutankhamun has to be considered Egypt’s greatest ambassador. There have always been cultural, political, economic and practical reasons for sending the treasures from the tomb on tour around the world,” says El-Awady. This sentiment is commonly held among Egyptologists, who know exactly where all the treasures are at any given time. It’s important to remove emotion from the equation, as the upkeep of the tombs and treasures need exposure (and money) from global tours. However, the issue of other items that have been permanently taken from Egypt – such as the Rosetta Stone – is a far more controversial issue. 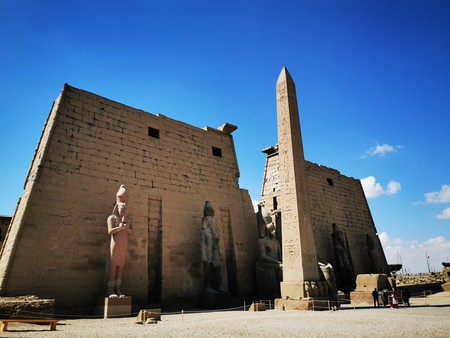 To get a sense of the grandeur associated with the temples of ancient Egypt, a trip to Luxor and Karnak is essential. Luxor Temple lies in the heart of the city, along one of the main roads, and from the outside might seem like a suspiciously small outpost. These initial concerns are quickly dispelled once you pass through the main entrance and explore the ruins within.

Having visited the tombs in the Valley of the Kings, a number of symbols along the walls in the temple will look familiar. There are references to Tutankhamun everywhere along the walls and up high in the columns, and as you learn more about other significant pharaohs, the story of one of the most influential periods of human history begins to reveal itself.

If you’re looking for an overnight stay in Luxor, check out our pick of the best hotels in the city.

If there is any site in Egypt that can match the breathtaking magnificence of the Great Pyramid of Giza, it is the incredible sandstone columns of Karnak Temple. The location has featured in films and literature for centuries, from Death on the Nile (1937) by Agatha Christie to the long-running James Bond and Transformers film franchises. The Great Hypostyle Hall retains many of the upright supporting columns that once held a flat stone roof, and although the hall is now open to the elements, the space itself has become the second most visited tourist destination in Egypt. 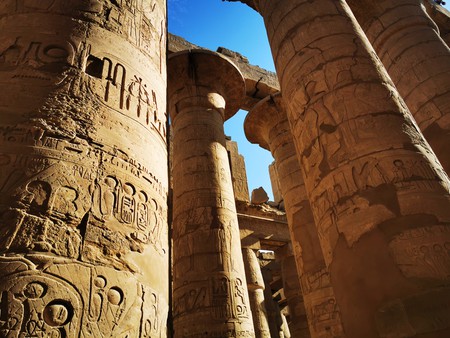 Queen Hatshepsut, who first began construction on the Great Hypostyle Hall, also oversaw a project to connect the temples of Luxor and Karnak with the Avenue of the Sphinxes. The 3km (1.8mi) path is flanked by two rows of statues and highlights the religious importance of both sites. Luxor itself was considered to be the spiritual hub of ancient Egypt, a period during which it was known as Thebes.

Today, most visitors to Luxor arrive by plane from Cairo or fly directly into the small airport close to the city centre. Trains and coaches are other options, but there’s only one way to traverse the Nile in style.

The most romantic way of visiting the historical sites of Upper Egypt is also the most practical. “A Nile cruise makes everyone feel like they are on board a time machine back to ancient Egypt,” says El-Awady. On our 10-day trip to Egypt, you can experience a Nile cruise for yourself, stopping off at the most ancient sites along the way. 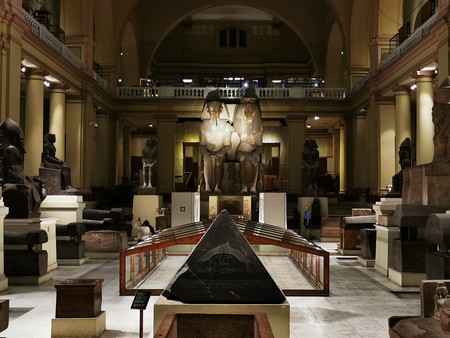 Located in the capital city, the Museum of Egyptian Antiquities – more commonly known as the Egyptian Museum – is the epitome of a dusty yet utterly enchanting aged home for items from the ancient world. An Italian company working on a design by French architect Marcel Dourgnon built the museum in 1901.

The initial layout of the building might seem haphazard – taking advantage of the many local tour guides who will offer to show you around for a fee is highly recommended – but there’s a charming sense of chaos inside that mirrors the incessant traffic and car horns outside. 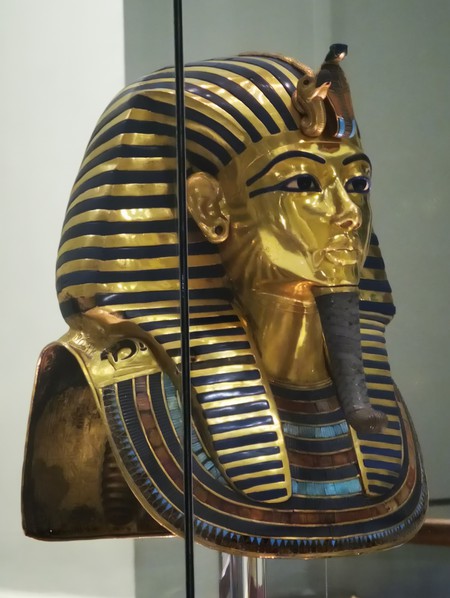 The temptation is to head straight to the first floor of the building, which houses over 120,000 artefacts in total, and find Tutankhamun’s golden death mask as soon as possible. While that’s certainly one way of approaching your visit if time is short, the best route is to fully explore the ground floor first to get a real sense of the size of the building and also to fully appreciate the age of the statuettes, carvings and stone tombs on show. There’s a fascinating section dedicated to the Rosetta Stone, which reveals another side of Egypt during a period when the country was popular with adventurers from around the world.

A number of the treasures here, particularly those relating to Tutankhamun, will soon be moved to a new museum that is set to transform the Giza plateau forever.

Inside the Grand Egyptian Museum 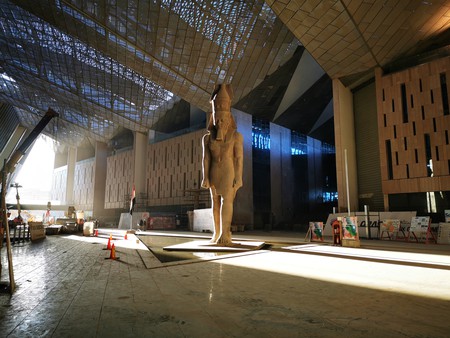 Many of Tutankhamun’s treasures, along with the remains of the king, will move the Grand Egyptian Museum in late 2020 | © Cassam Looch / Culture Trip

The GEM houses treasures from around Egypt, including the ultimate collection of Tutankhamun artefacts. The museum is part of a wider project to improve the area around the pyramids of Giza, which includes a number of hotels to be built on the plateau surrounding the ancient wonders.

The pyramids themselves are a feature of GEM, too, with three viewing platforms offering unfettered views that are hard to find anywhere else in Cairo. Construction on the museum began in 2012, almost a decade after the project was first announced. There will be improved transport links to and from the venue, hopefully eliminating the need to plan every inevitable delay by allowing for what the locals call “Cairo time”. It’s just good old-fashioned tardiness by any other name, but it really is a big concern when navigating the vast city day or night. 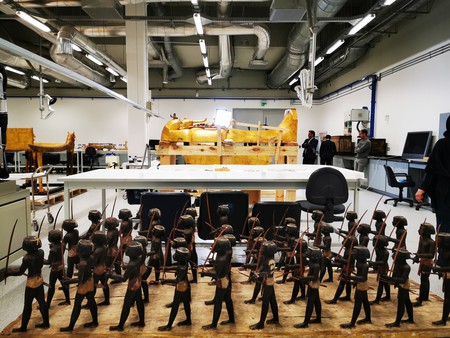 The work taking place behind the scenes at the temporary laboratories on-site here is revealing even more treasures from Tutankhamun’s tomb. Restoration work on some items is complete, as they’re being put in place ahead of the grand opening. Wooden chests and paperwork have been moved from Luxor to Cairo, however, with these leading to new artefacts being uncovered. Howard Carter and his team were careful to take everything from the tombs, including the dirt and sand that covered the larger finds. Today, as scientists work their way through all of these sealed containers from the 1920s, they are finding objects from the tomb that were previously missed. The museum will be able to legitimately claim to be the home of the most complete Tutankhamun exhibition ever put together.