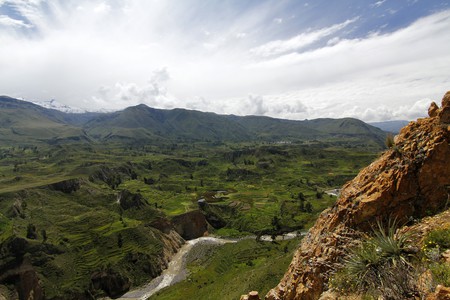 While Cusco and Machu Picchu gain most of the headlines and are magnets for tourists in Peru, Arequipa is gaining traction as the new go-to destination. It is a key anchor of the Gringo Trail and is now becoming more than just a layover on your way to Cusco. Once you’ve seen the beauty the city has to offer – and there’s a lot to take in – the surrounding areas will keep adrenaline junkies busy for weeks if not months. With volcanoes, the world’s second deepest canyon and white water rafting, here is why Peru’s second largest city is the new hot destination for tourists.

This is the world’s second deepest canyon and is twice as deep as the famous Grand Canyon, but it is more than mere numbers. Along the canyon you’ll find many different micro-climates and changes in scenery – and don’t forget to look up and spot the rare Andean Condor.

The white colonial center is a photographer’s dream with volcanoes rising above the city in the background. Hang out in the city center, walking around admiring the white buildings made out of white volcanic sillar rock. The city’s central core earned a UNESCO World Heritage Listing, so you know it’s worth your time. 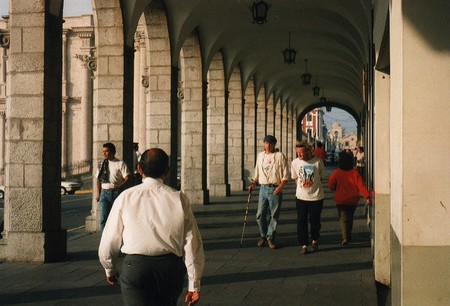 Explore the mystical white drawings on rocks in the desert just outside of Arequipa. The desert is scattered with these white paintings depicting animals and people. The origins of the site still remain a mystery, but it can be dated back to the Wari period, about 1,200 years ago.

Arequipa is surrounded by three volcanoes which you can hike up to. They offer a beautiful backdrop to the city and a couple days worth of hikes. El Misti is about 5,822 meters which adventurers can scale with ice picks in hand. Tours take about 2-days to complete.

Along with Lima, Arequipa has some of the best food in Peru – and that’s saying a lot for a country that prides itself on its eats. The classic dishes such as rocoto relleno (a stuffed pepper) and ocopa (a potato in a creamy, spicy sauce) call the white city home.

So enormous it takes up an entire block, this colonial building is a can’t miss – and you probably won’t, considering how imposing it is. The best way to experience this gigantic structure is to take a tour, offered in just abut every language and lasting about an hour. After the tour you’re welcome to wander around, but be careful, you just might get lost.

The canyons near by Arequipa are home to plenty of hiking options and longer treks can be arranged with tours. There are also nearby mountains you can hike through and, of course, there are also the volcanoes which have to be scaled while in Arequipa. The city is also a great place to head if you love to kayak and even to go white-water rafting, with rivers close by. If all that isn’t enough, the area around Arequipa has a seemingly endless amount of dirt-biking trails for novices and experts.

Not of the Spanish variety with blood and swords, but a fight that involves bulls nonetheless. In Arequipa, the bulls fight each other for the female in small stadiums on the outskirts of the city.