The Top 8 Emerging Musicians from Ecuador You Should Know 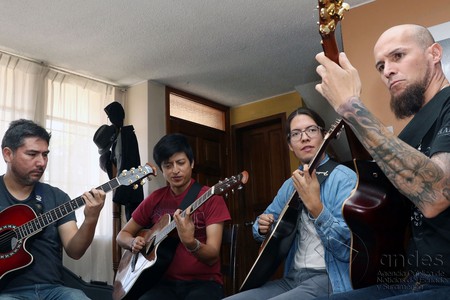 A new generation of talented, risk-taking musicians are emerging in Ecuador, both preserving the country’s musical legacy while defining a new one. Here are eight artists you should check out.

Nicolá Cruz , this French-born, Quito-based musician with Ecuadorian roots, has attracted a great deal of attention in the last few years with his fusion of traditional Ecuadorian music from the Andes to the Amazon, combining familiar melodies and traditional instruments with fresh “cumbia” beats, combined with a more modern, electronic production and sound. He himself resists a specific genre label. As he told Vice Media, the “idea of categorizing my music is mocking the age we live in — I simply find my inspiration from traditional root rhythms and work from there.”

Mateo Kingman has emerged as one of the key players in the Ecuadorian music renaissance, merging musical traditions past and present. His ambient and meditative compositions, incorporating hip-hop, reflect the folklore influences of his early years, such as Chile’s revered Violeta Parra. Yet with their jungle-like sound effects and thematic preoccupation with nature, they also serve as an expression of how growing up in the Amazon city of Macas, in proximity to the Shuar tribe, impacted his outlook on the world.

No, not all Ecuadorian music necessarily sounds “Andean” or tropical. La Máquina Camaleön mines the world 60s pop and psychedelia with such influences as Lou Reed’s Velvet Underground, Arthur Lee’s Love, and the Moody Blues, not to mention such 80s bands as the Jesus and Mary Chain, to provide a fresh serving of melodic, psychedelic rock – slightly hard but not too heavy – for a millennial audience.

Though he is strongly influenced by Dr. Dre, Carlos Osejo, aka “Clo Sismico” has scored big with his own distinctive Ecuadorian hip-hop; the video for his song, “El Raton” currently has more than 235,000 hits. His slow but terse raps speak passionately about the tough realities of urban life in Ecuador. He is also a producer, and the bands whose sounds he has shaped, such as Marmota and 77 seven, are worthy of attention in their own right.

Ataw Allpa (“Ataw” meaning “blessed” and “linker”, and Allpa meaning “Earth”, the name can be interpreted as meaning “word linker”) has been described as a “one-man digital cumbia band”. With the accordion as his favorite instrument, and an encyclopedic knowledge of Latin America’s rich and danceable heritage of coastal music, from cumbia to carimbo and more, Ataw Allpa has brought a fresh interpretation to this genre with very catchy melodies and rhythms. You can hear samples of his compositions, such as “Cyberfolk” here.

This 26 year-old prodigy from Guayaquil has mastered the guitar, bass, synthesizer, and drums. At 18 she was already mixing music at parties, and has since become a name in Ecuador’s underground scene. Her own work, a series of dance tracks entitled Departycule Hyena, shows off her flair for hypnotic, pulsating beats.

This is Andean hip-hop, in which the melodies of indigenous folk compositions, complete with pan flutes and the guitar-like charango, alternate with pointed, often highly political rap, and in both Spanish and Quichua at that. All the better to underscore a pride in the musician’s racial and cultural identity.

A graduate of Quito’s National Music Conservatory, Lascivio Bohemia has created his own niche in the local music scene by sampling and remixing the Afro-Ecuadorian sounds and beats of the country’s coastal region with the native music of Ecuador’s sierras. Indeed, the title of a recent release, Afro Andes EP, is a literal declaration of his musical leanings.