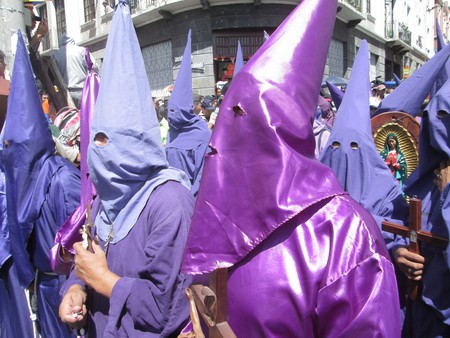 For the largely Roman Catholic nation of Ecuador, in which religion is a core part for many people’s lives (especially among the poor, who make up a third of the population), there is no more important religious occasion than Semana Santa, or “Holy Week,” the seven days that follow Palm Sunday, ending with Easter Sunday. And in Quito, in particular, the locals demonstrate their devotion to this week, more spiritually important than Christmas, in passionate religious pageantry.

On the Tuesday following Palm Sunday, Puellaro, a small community north of Quito, features its own unique pageant honoring Christ’s entry into Jerusalem through 12 platforms featuring key figures in the gospels carried through the streets and downtown.

Quito holds a Catholic ceremony dating back to the Roman Empire

A solemn ritual known as the Arrastre de Cuadras, or “Dragging of the Capes,” performed on the Wednesday preceding Holy Thursday in Quito’s Metropolitan Cathedral, begins with the Archbishop of Quito leading clergy while towards the nave while carrying an enormous black flag featuring a red cross. The priests, dressed in hooded black robes, lie prostrate on the floor of the cathedral while the flag is then waved over them, a gesture that dates back to antiquity: a flag was waved over the regiment of a fallen Roman general to transfer the general’s courage to his soldiers. 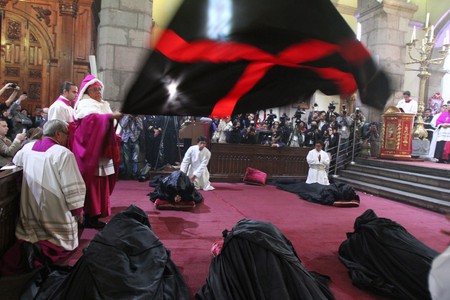 The folkloric dance company Jacchigua guides a procession of faithfuls holding candles through Quito’s historic district. Company members re-enact some of the most revered icons in Catholic canon, such as the Virgin of Legarda, the Virgin of Guadalupe, and various other saints.

At noon, in a symbolic nod to the hour of Jesus Christ’s sentencing by Pontius Pilate, several hundred men known as cucuruchos in purple robes and pointed masked headdresses, along with many others dressed like Christ in his Passion carrying a heavy wooden cross, begin a long march in a Procession of the Penitents through Quito’s ecclesiastical historic district. Up to 250,000 onlookers descend upon the area to watch and to pray. 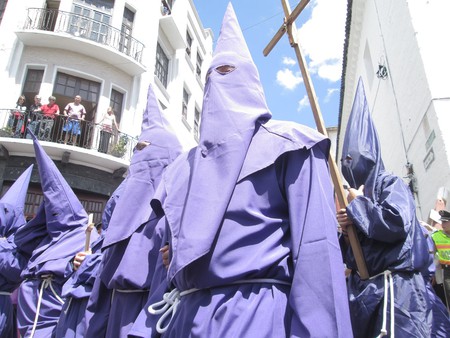 Procession of the Penitents | © Rick Segreda

In order to identify with passion of Jesus Christ on the day of His suffering, many of the participants will go out of their way to inflict real suffering onto themselves, from self-flagellation to attaching cacti onto their exposed backs. 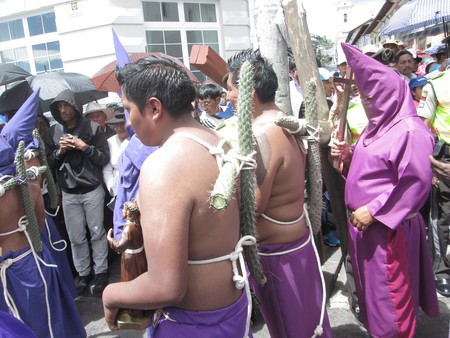 Pain of the Penitents | © Rick Segreda

Women play an important part in the Good Friday march

Women dressed in their own purple robes with veils covering their faces join the parade as the ‘Veronicas,’ honoring the woman who, out of pity, gave Jesus her veil to wipe his face. 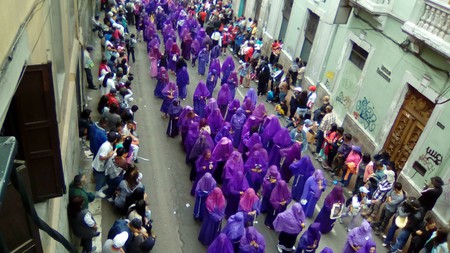 The Devils have their own procession on Saturday

In Alangasi, a community south of Quito, in a unique ceremony involving the burning of a rag—symbolizing the fires of eternal punishment as well ass exorcism—locals dressed as demons leave the church and parade through the center of town. 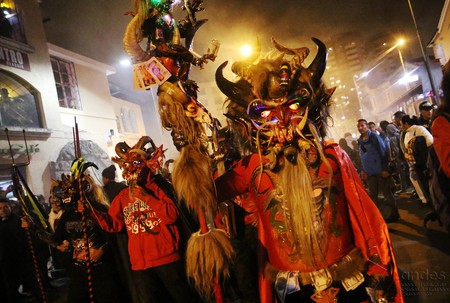