The Best Hotels in Ecuador for Every Traveler 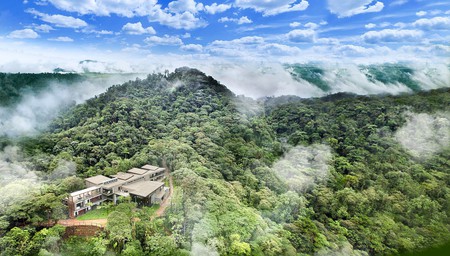 If you're looking for somewhere remote in the Ecuadorian cloud forest, Mashpi Lodge is for you | Courtesy of Mashpi Lodge / Expedia

From centuries-old abodes in time-worn old towns to state-of-the-art bird-watching retreats in the misty cloud forest, Ecuador’s hotels take some beating. The South American nation’s scope of places to stay spans from (quite literally) breathtaking retreats high up in the mountainous Andean interior to luxury Galápagos lodges within boat-bobbing distance of the archipelago’s Darwinian wildlife. Here are the best. 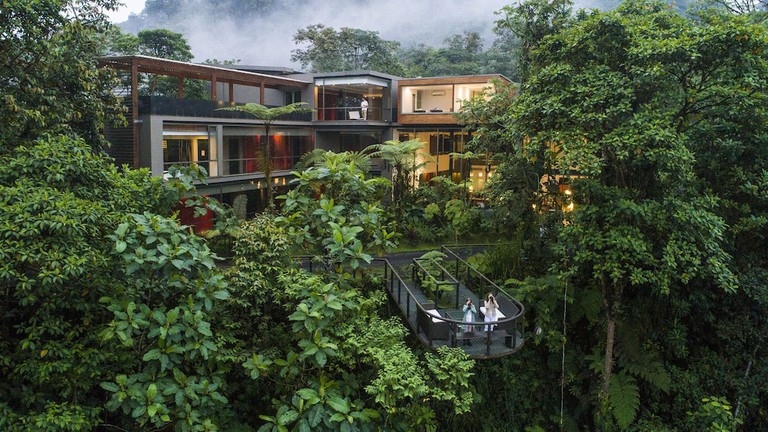 Mashpi Lodge | Courtesy of Mashpi Lodge / Expedia
View Rooms
The terms ‘state-of-the-art’ and ‘bird-watching’ rarely fly together but Mashpi Lodge is a stylish exception. Secreted away in a 2,500 acre swathe of Ecuadorian cloud forest, this lodge-cum-reserve protects 400-plus bird species among a host of other animal and plant life, and it’s exclusively guests who get to experience this wilderness paradise. Enhancing the enjoyment is the lodge itself: sustainably constructed, with floor-to-ceiling glass making the forest outside loom large, and a spectacular two-floor dining room/bar that showcases the best of the country’s cuisine – especially impressive given it’s remote location.
More info 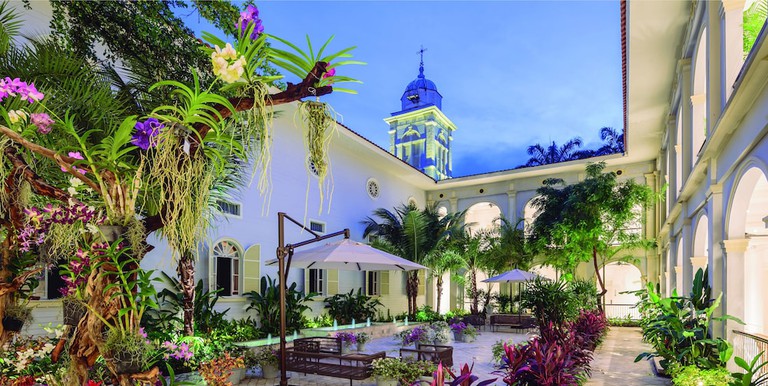 Hotel del Parque | Courtesy of Hotel del Parque / Expedia
View Rooms
If you wondered why, in Ecuador’s biggest city of Guayaquil, the colonial buildings in the centre seem lacking, it’s because many were removed then reassembled in ‘Parque Histórico de Guayaquil’, or Guayaquil Historic Park. This might be more open-air museum than genuine district, but imposing Hotel del Parque is no mere pretty face. It’s an 1890s chateaux with 44 substantial period-yet-contemporary rooms, transported board-by-board from its original location. Hotel dining at Casa Julian, facing the River Daule, serves exquisite local seafood.
More info 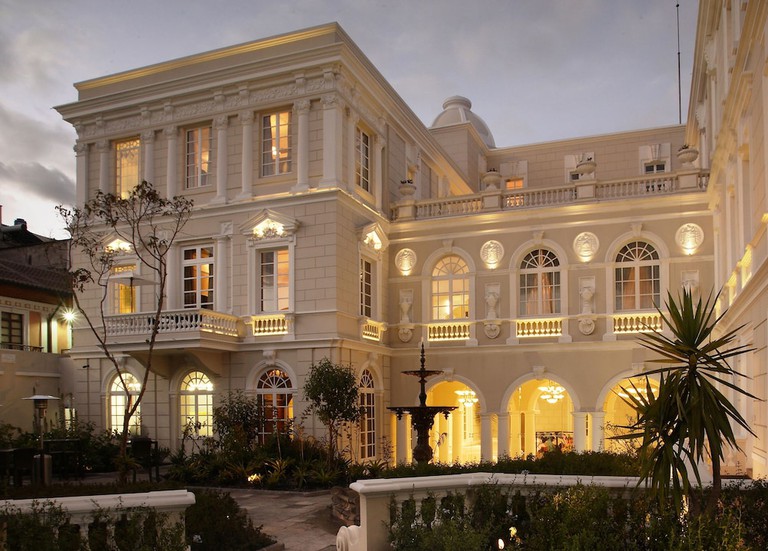 Casa Gangotena | Courtesy of Casa Gangotena / Expedia
View Rooms
The colourful Gangotena clan, among Ecuador’s most important families, owned this palatial property on pretty Plaza San Francisco in Quito, for more than 160 years. This distinguished lifespan has furnished the historic hotel with innumerable intriguing stories: such as when the original 1600s residence was set ablaze on a Gangotena daughter’s wedding day in 1914 (a bitter ex, supposedly) and required rebuilding. Plush, soundproofed rooms average 35sqm, with Art Deco furnishings and some even have elaborate early 20th-century murals.
More info 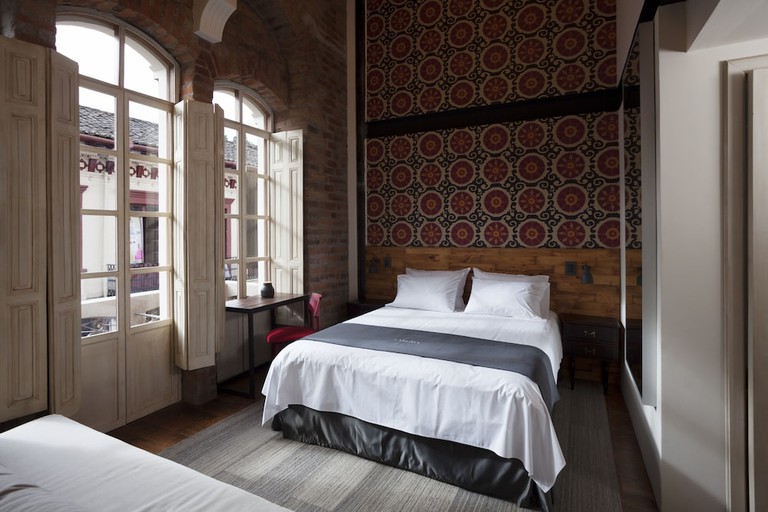 Quinta Carlota | Courtesy of Quinta Carlota / Expedia
View Rooms
A historic landmark as much as a top-end hotel in Quito’s Old Town, this raspberry-hued hotel with its wedding cake cornicing is quite contemporary inside with its exposed brick walls and sleek use of traditional Ecuadorian textiles. Of the 12 rooms, two are Greenwich-style loft apartments and there’s a further two suites. What it lacks in space it compensates for in style, one free airport transfer is included and there is an intimate bistro, a reading room and a rooftop lounge that together lend extra leg room.
More info 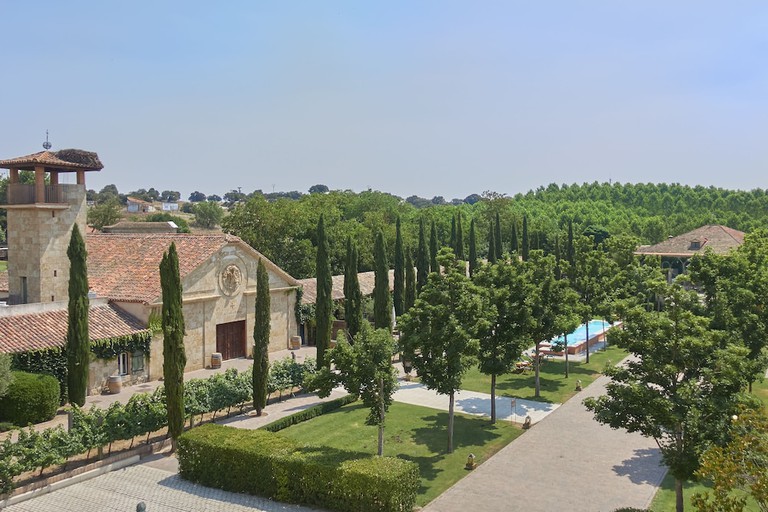 Hacienda Zuleta | Courtesy of Hacienda Zuleta / Booking.com
View Rooms
You are unlikely to decline a sojourn at the working farm of a former Ecuadorian president, not when it’s a fetching 17th-century hacienda (country estate) hogging a mesmeric location in undulating pastoral land, beneath a necklace of the nation’s most iconic volcanoes. Wood-floored rooms have touching features, such as arched windows and wood-burning stoves; in the beamed, whitewashed dining room you are truly waited upon in presidential style; and how about riding high on the hacienda’s own breed of horses (Zuleteños)?
More info 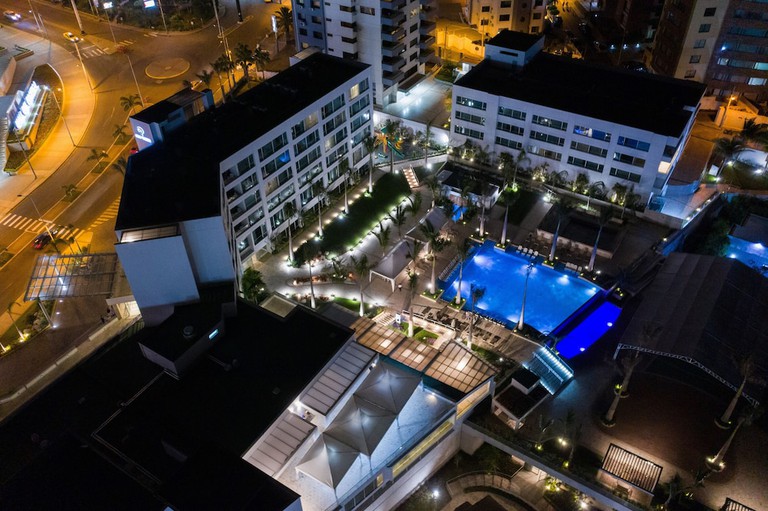 Oro Verde Manta | Courtesy of Oro Verde Manta / Expedia
View Rooms
The Oro Verde chain, with seven high-end hotels across Ecuador, have made their signature sleep – in beach resort and tuna-fishing port Manta – a special and substantially-sized one. Right on the malecón (esplanade), it’s a 91-room, 27-suite affair with modern, taupe-toned furnishings. A pool and gym and business centre on-site ensure a choice between relaxation, work-out and work. Don’t miss a trip to nearby Montecristi, either: the birthplace of the ‘Panama’ hat, a bedrock of Ecuadorian culture and fashion.
More info 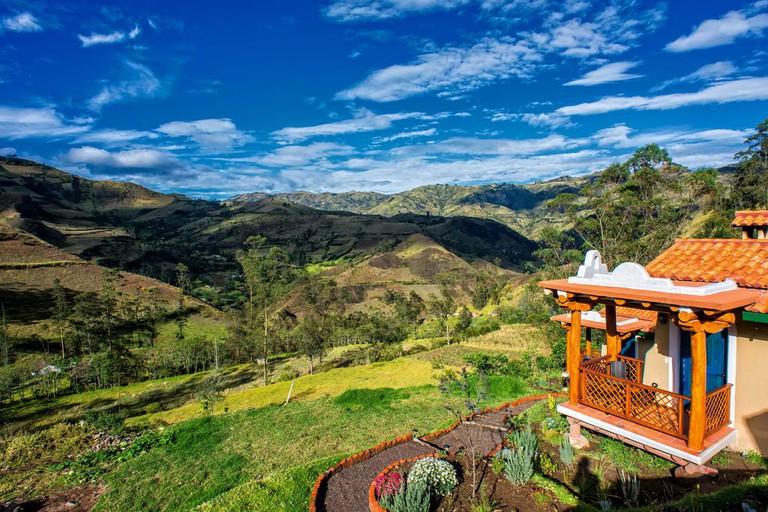 LluLlu Llama | Courtesy of LluLlu Llama / Booking.com
Book Now
A terracotta-roofed, pastille-coloured gaggle of turn-of-the-20th-century buildings tumble down the pea-green hillside in the little village of Isinlivi, one of the highest communities on the renowned Quilotoa Loop mountain trail in the Ecuadorian Highlands. It treads a tightrope between hostel and hotel, plusher than the former and less formal than the latter. The excellent outdoor activities begin on the doorstep and a spa centred on a solar-powered Jacuzzi invites relaxation. 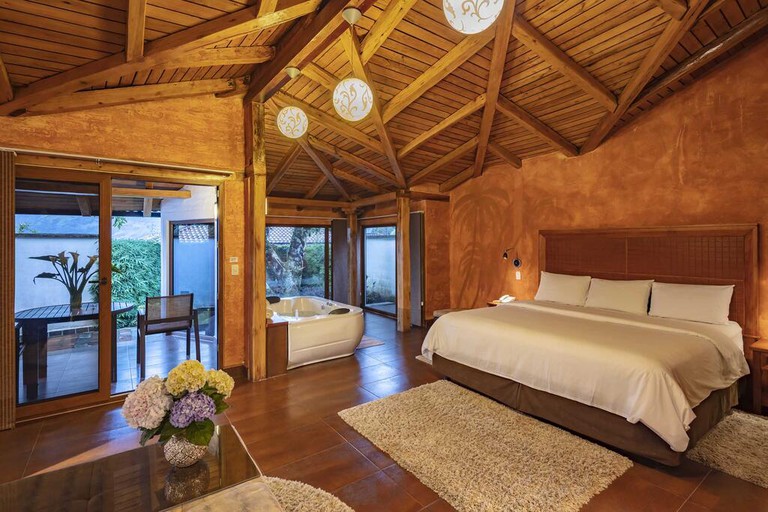 Luna Volcán | Courtesy of Luna Volcán / Booking.com
Book Now
Baños is Ecuador’s adventure-sports capital: whether it’s bungee-jumping into a river canyon, hiking to a waterfall or negotiating rapids during whitewater rafting, this city caught between mountain and jungle can oblige. So, no surprises that the ‘adventure spa’ concept has developed here. At Luna Volcán, you can try an adrenaline sport, then relax with a local volcanic ash exfoliation in the spa. A twin set of raised mountain-edge pools overlook the city with spectacular effect from on high. Rooms and suites feature vivid murals depicting Ecuador’s flora and fauna. 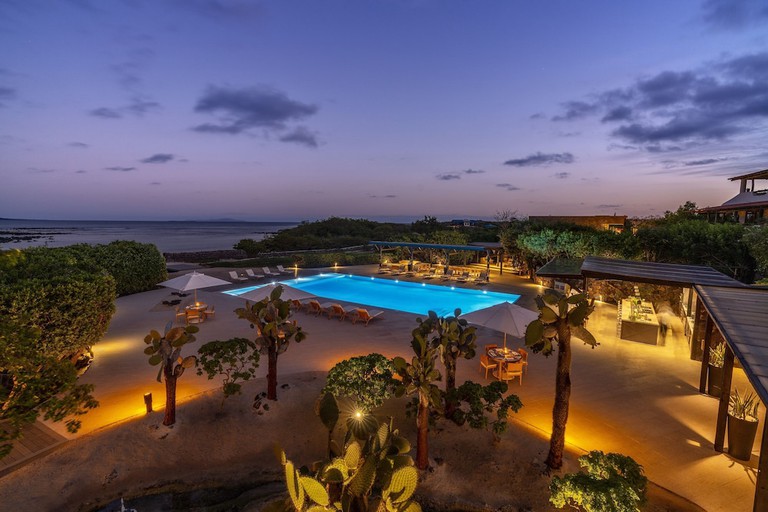 Finch Bay Eco Hotel | Courtesy of Finch Bay Eco Hotel / Expedia
View Rooms
Out in the world-famous wildlife sanctuary of the Galápagos, just outside Puerto Ayora on the main island of Santa Cruz, beachfront Finch Bay hotel is among the archipelago’s best expedition hotels, where everything from snorkeling to giant tortoise encounters can be arranged for guests. Top Ecuadorian designer, Julio Vinueza, designed the bedrooms; restaurant food is often grown in the on-site vegetable garden or caught in the ocean nearby; and the pool is idyllic.
https://www.instagram.com/p/BURsZ6XAEQh/?taken-by=finchbayhotel
More info
Give us feedback