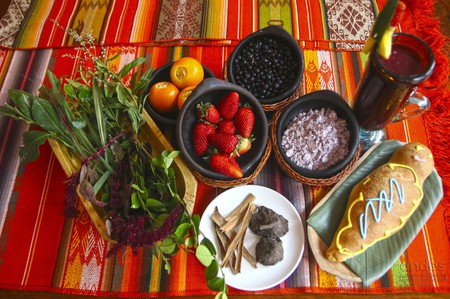 Every year, on November 2, Ecuadorians convene in local cemeteries to celebrate Día de los Difuntos, or Day of the Deceased. While the holiday holds similar origins to those of the Day of the Dead festival held in many Mexican communities, the traditions are very different.

Since ancient times, pre-Hispanic tribes honored their ancestors. Therefore, when Spaniards arrived and celebrated All Saints Day on November 1, indigenous peoples embraced the holiday as one of their own. It makes for an interesting blend of customs. For example, in Otavalo, there are two cemeteries. One is for mestizos, people of mixed European and Andean ancestry. The other is for families with native ties going back generations. In the former, visits to graves are very formal and somber. But in the latter, families picnic over the tops of the graves, placing celebratory foods next to their deceased loved ones, as children play tag and older family members reminisce.

While some families will use November 1 to visit the graves, this day is most often spent preparing the traditional foods for the following day. Two items are of the utmost importance: a drink called colada morada and a bread called guaguas de pan. 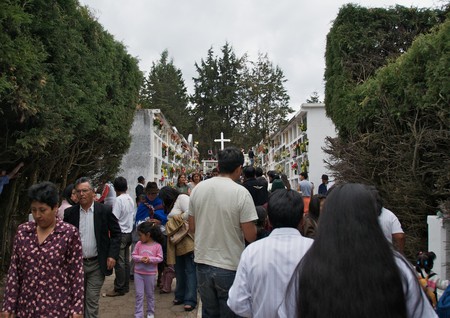 Coladas are drinks thickened with grain. Colada morada is thickened with a blue corn flour, helping provide some of its unique color. But up to 20 ingredients might be used, including purple blackberries, midnight blue blueberries, and bright red strawberries. The final drink is sweet and thick, almost dessert-like. Usually, it is sipped while warm and is often accompanied by guaguas de pan. Many restaurants and cafes in Quito start selling colada morada weeks before November 2. 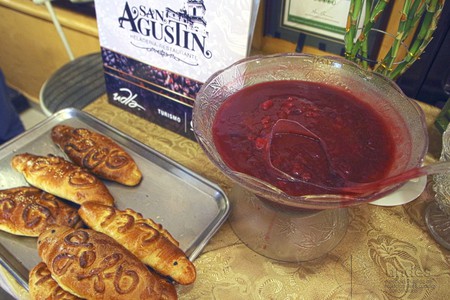 In some small towns, families gather at communal ovens to bake guaguas de pan, bread in the shape of small babies or children riding horses. Other shapes, echoing symbols of infinity like spirals and circles, can also be made for consumption. But it is the guaguas that are placed on the graves. In fact, the street leading up to a cemetery might be full of vendors selling locally made guaguas de pan for those families who do not have access to an oven or time to invest in the baking.

Some of the older vendors do not like to see tourists snapping pictures or buying the guaguas de pan. They believe that foreign visitors are stealing pieces and parts of their culture. Please be respectful; ask first and wait for a response before raising your camera. 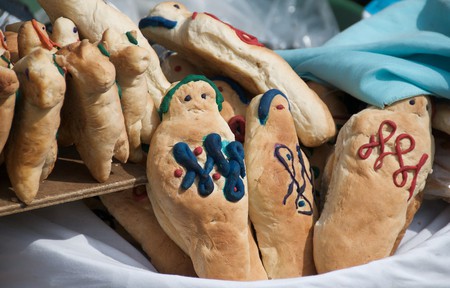 On the actual Día de los Difuntos, families dress in their finest clothes, bring their favorite foods to share, and picnic together in the cemetery itself. In places like Cotacachi and Otavalo in the Imbabura Province and Calderon near Quito, there are hundreds of people who fill the cemetery grounds. Festivities spill out beyond the cemetery and it is common to find pop-up carnivals, cultural parades, and vendors selling plates of hornado. All of those latter events are open to tourists. And while those same tourists are not forbidden from entering the cemeteries, there is a taboo against photographing families without their permission. If you decide to pay a visit, ask a local family if you can join them and play by their rules. 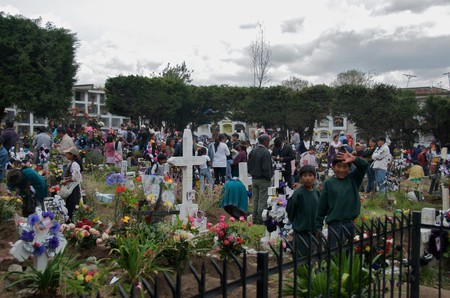 Day of the Dead, Ecuador | ©Alan / Flickr
Give us feedback