A Guide to Ecuadorian Ceviches 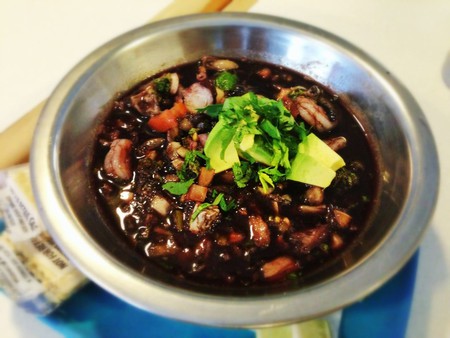 Rarely served on a plate, Ecuadorian ceviche stands apart from its Peruvian cousin, which often features every piece and part laid out on a serving platter. Ecuadorian ceviche is fresh, saucy, and delicious. It comes by the bowlful, is rarely meant to be shared, and requires a little know-how before ordering.

Some recipes use ketchup (called salsa de tomate) in place of fresh tomatoes and yellow mustard. Indeed, these two ingredients are often offered at the table, especially in little hole-in-the-wall restaurants with a local clientele.

A few ceviches, such as fish or octopus, are merely dressed with lots of freshly squeezed lime juice, allowed to steep so that they release their own juice, and topped with some sliced red onion and maybe a small portion of chopped tomato.

A bowl of ceviche almost always arrives at the table with a few side garnishes, including canguil, tostados, and chifles. Canguil is popcorn and should be added a few pieces at a time as it soaks up the juicy ceviche and quickly turns soggy. Tostados are toasted corn kernels. They are salty, very crunchy, and taste slightly like Fritos. Chifles are chips made from finely slicing and deep frying green plantains. The best ones are very thin and crisp, usually made on-site. But most come from a bag bought at the grocery store. Any and all of these can be added to your ceviche or merely eaten on the side.

Occasionally ceviche aficionados ask for a side of rice, usually at breakfast. They want to eat every last delicious drop of the sauce, and rice is the perfect side to accomplish that goal.

Shrimp ceviche is a hands-down favorite throughout Ecuador. Shrimp is easy to come by, whether wild-caught in Pacific Coast waters or farmed along the Ecuadorian coast. Before becoming an integral part of a bowlful of ceviche, the shrimp is generally poached, making it a great option for diners wanting to avoid raw seafood.

Fish ceviche is almost always made with a locally caught mild, white fish called corvina. Americans know it as sea bass. Finely chopped, the raw fish is tossed with lots of lime juice. Ceviche de Pescado is the most “pure” of all Ecuadorian ceviches as it rarely comes with the tomato-based sauce.

Ceviche de Concha’s main ingredient is the black clam, a dark-fleshed shellfish that makes a dark inky sauce for the ceviche. This dish is a favorite with many Ecuadorians, but it has a reputation for making foreigners sick. Some believe that the black clam contains a bacteria that aggravates stomachs with no prior exposure. Play it safe, and try grilled black clams instead.

Depending on the restaurant, you might also find ceviche made from crab, squid, octopus, or scallops. For the most variety, try seafood markets along the coast, especially in the larger cities such as Guayaquil and Manta. In the Ecuadorian Sierra, expect to find only the trifecta of shrimp, fish, and octopus.

If you can’t make up your mind, order a ceviche mixto. Most menus offer different pricing for a single ingredient, two ingredients, or three ingredients. A popular version is to mix shrimp with fish. Every once in a while, a place will offer a special ceviche mixto with their own ingredient list. Double check that black clam, or concha, is not included if you want to avoid it.

Ceviche de Palmito uses the same tomato-based citrus sauce but has hearts of palm instead of seafood. Fresh heart of palm is absolutely delicious and is often sustainably harvested. This ceviche option is a great one in the Sierra and the Amazon Basin.

Ceviche de Chocho is street food extraordinaire! Found throughout the Sierra, this tomato-based citrus sauce ceviche includes a legume called chocho. This small white bean comes from a relative of the purple lupine, is extremely high in protein, and is commonly eaten by the native peoples of Ecuador. Usually ordered from a cart, the vendor will add ingredients as you point and ask. Be warned, though, as locals often add fried pork in some shape or form, so don’t ask for the works if you want this to be truly vegetarian!