A Brief Introduction to Completos Italianos 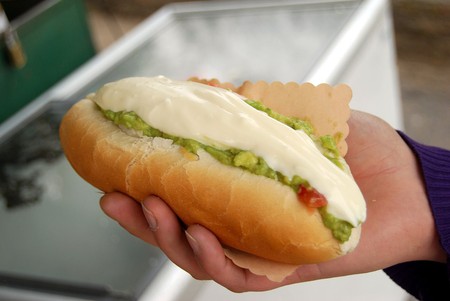 Everything is better with avocado — including hot dogs. After a taste of the Chilean completo italiano, you’ll never go back to boring old mustard and ketchup. The completo italiano is easily Chile’s most beloved street food. Learn how locals have reinvented the hot dog in the most epic way possible.
It’s important to ask for extra napkins when ordering a completo italiano as this Chilean street food is as messy as it is tasty. Translating literally to “Italian complete,” a completo italiano is essentially a hot dog with a unique set of toppings. The traditional Chilean “completo” includes bread, sausage, sauerkraut, chopped tomatoes and an ample serving of mayonnaise. However, the completo italiano – which gets its name from its resemblance to the green, white and red of the Italian flag, the il Tricolore – includes mashed avocado, chopped tomato and mayonnaise. On top of the completo italiano, Chileans will often add mustard, ketchup or spicy ají – a green chilli sauce – to complete their completo. 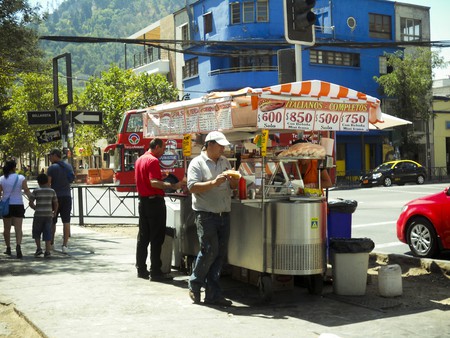 Today in Chile, the completo italiano is one of the most widely available dishes, served at a variety of different eateries. You can buy them in street stalls, bus stations, fast food restaurants like the Chilean chain Doggis, and also in “fuentes alemanes” – German sandwich shops – which also use the name “quick lunch.” Completos italianos also make great drunk food. At night in Santiago’s bohemian Bellavista neighborhood, several completo stands pop up to feed Chilean’s “bajón”, that feeling you get when you’ve been drinking piscolas (pisco and Cokes) all night and now it’s time to eat.

Variations of the completo

Besides the traditional completo and the completo italiano, there are dozens of other variations of the Chilean completo. They all start out like the original hot dog with a bun and sausage, but the extra ingredients change. The completo dinámico, for example, has chopped tomato, sauerkraut, avocado, a green sauce with chopped parsley, mayonnaise and a carrot, onion and pickle relish. Meanwhile, the vegetarian iteration of the completo is the “completo falso” (the false complete), which is a completo without the sausage.

Many of the Chilean completo styles are given names based on different nationalities. The completo gringo (American), for example, includes tomato, pickles, lettuce, onions and mayonnaise, while the Brazilian, completo el Brasileño, includes melted cheese and avocado, resembling the green and yellow of the Brazilian flag.

Origins of the completo

Chilean completos have been around for some 80 years. Many suggest Chile’s very first completo shop started in the heart of historic Santiago, Plaza de Armas, where you can still find plenty of completo eateries today. Eduardo Bahamondes of the restaurant Quick Lunch Bahamondes – who first imported the traditional hot dog to Chile in the 1920s – claims he came up with the idea for the completo after working at hot dog shops in the United States. He took the base of the hot dog, the sausage and bun, and added ingredients that would better appeal to a Chilean palate. Mustard and ketchup didn’t quite do the trick for Chileans, who love their avocado, a major national export.