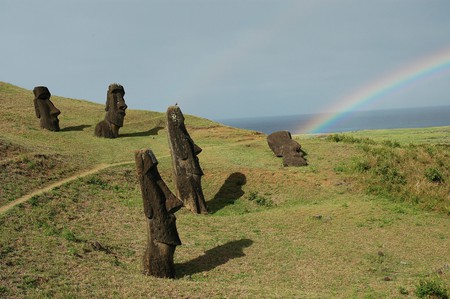 Thanks to its rather ambiguous past, Easter Island (Rapa Nui) exudes mystery and its history has been surrounded by mythology. Historians and anthropologists have spent decades trying to understand the culture of its early inhabitants and the towering moai statues that they built. Uncover some of its secrets with these facts about the island.

How did Easter Island get its name?

On Easter Sunday 1722, Dutch admiral Jacob Roggeveen became the first European to land on this isolated Polynesian island, and named it Paasch-Eyland – Dutch for ‘Easter Island’ – in tribute. The island is also known by the name Rapa Nui, which the islands’ inhabitants still use. Indeed, its indigenous population is known as the Rapa Nui. There is some discussion over whether this was the island’s original name, or whether it was a name conceived by Peruvian slave raiders in the mid-19th century, who compared it to the Rapa island in French Polynesia. Before this, however, the first name given to the island is thought to be ‘Te Pito O Te Henua’, which translates as ‘The World’s Navel’.

Where is Easter Island?

Ranking first place on the United Nations’ Isolation Index, Easter Island is the most secluded inhabited island in the world. It lies in the southeastern Pacific Ocean in Oceania, and although it is still a distant 3,800 kilometres (2,360 miles) off its coast, Chile is the closest country to Easter Island. In 1888, Chile annexed the island, which remains a territory of the nation to this day, as part of the Chilean Valparaiso region. 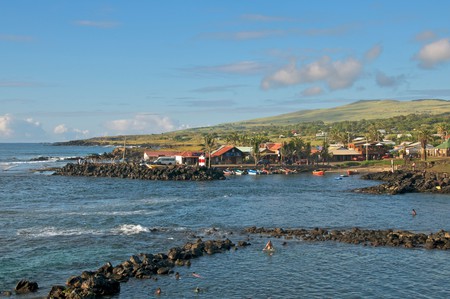 Can you travel to Easter Island?

The only way to get to Easter Island is by plane, as it doesn’t have any harbours. The shortest journey is from the Santiago airport in Chile, which takes five hours. It’s also possible to fly over in seven hours from Tahiti.

Is Easter Island inhabited, and where did its inhabitants come from?

Legend says that around 1,500 years ago, the adventurous chief Hotu Matu’a, who hailed from the mythological Polynesian island of Hiva (now thought to be the Marquesas Islands), led his people to Easter Island. Hotu Matu’a and his people are said to have settled the island, living remotely, far away from the rest of the inhabited world for many generations until the arrival of European explorers. 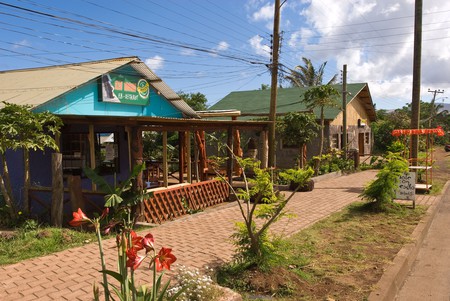 What happened on the island?

Although there is a gap in recorded history between the arrival of Hotu Matu’a in the 1200s and Jacob Roggeveen 500 years later, it is believed that the island maintained a thriving population of around 10,000 people for many years. However, by the time travellers from Europe arrived, the number of Rapa Nui had dropped to around 2,000-3,000. The reduction in the island’s population is thought to be largely due to deforestation – the island’s loss of trees exposed the volcanic soils to erosion, reducing the amount of fertile land. Oral tradition also claims that there had been civil warfare and cannibalism among the inhabitants. The population dropped further after the Europeans’ arrival, as infighting between social groups led to crops and housing being burnt to the ground, resulting in famine and homelessness. In addition, raids by Peruvian slave traders, the introduction of European diseases and emigration meant that by 1877, only 111 people remained on the island.

How were Easter Island’s statues made?

The statues on Easter Island were made from tuff – solidified volcanic ash, which can be found on the island’s Rano Raraku volcanic crater. Tuff is a fairly soft rock, so islanders would have carved it by hand with stone chisels. The statues were then taken from the crater’s mine to their resting points around the island, but with no written history and only the spoken stories passed along from generation to generation to rely on, there is no real indication of how the statues on Easter Island were transported around. Considering that many of the statues have bodies buried underground and the heaviest is a hefty 82 tonnes (180,779 pounds), it must have been some impressive feat. 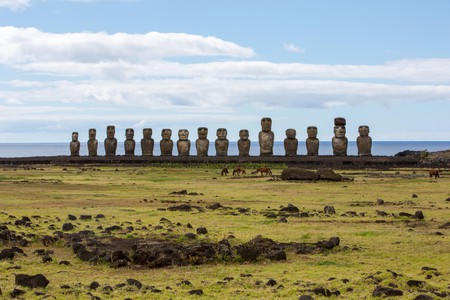 What is the meaning behind Easter Island’s statues?

The Rapa Nui people carved these huge stone sculptures to represent the faces of worshipped ancestors, who are supposedly buried underneath the ahu (platform). The reason the sculptures all face inwards is to show protection for each other. Some of the moai have pukao (a hat-like structure on their heads); some theories consider them to have an expression of power, others that they represent hair. Originally there were thousands of moai statues, but before the island was made a UNESCO World Heritage Site in 1995, many of the statutes were taken by collectors. Moai can be found in museums all over the world, the most famous being the Louvre in Paris and the British Museum in London. What’s more, the largest moai can be seen from Google Earth.

How is Rapa Nui’s culture celebrated?

The Tapati Rapa Nui Festival is the annual celebration of Easter Island’s culture, and is held during the first two weeks of February each year. The island splits into two teams, both led by a queen, with the winner being crowned ‘Queen of the Island’ for the entire year. Traditional activities the islanders participate in during the festival include dancing, wood carving and playing music, which is played on unique eight-string flat ukuleles that look a little like electric guitars. 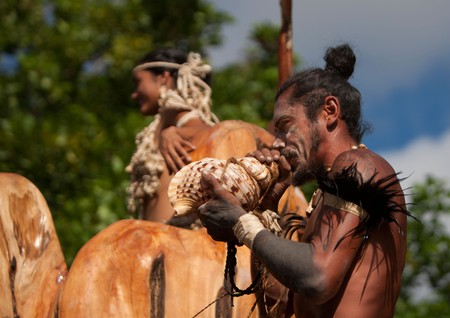 What is the rongo-rongo scripture?

The kohau rongo-rongo, as islanders call it – also known as the rongo-rongo scripture – is still an undeciphered text, consisting of glyphs carved on wood or tablets. Rongo-rongo means ‘the great message’ or ‘the great study’. So say the theories around Easter Island that the great leader, Hotu Matu’a, had 67 tablets that corresponded with the 67 Māori wisdoms – this included knowledge of astronomy and sailing. However, the real meaning is still unknown to us as there was no contact with these inhabitants until the arrival of the Spaniards in 1770.

Can you swim around Easter Island?

Visitors to Easter Island can bask in the beautifully clear waters of the Pacific Ocean, which is said to be the most transparent in the world. The water around the island has fantastic visibility, up to a depth of 50-60 metres (164-196 feet), creating the perfect conditions for snorkellers and scuba divers, who can enjoy swimming among corals and fish of all shapes and colours.