A Brief History Of Copacabana Palace 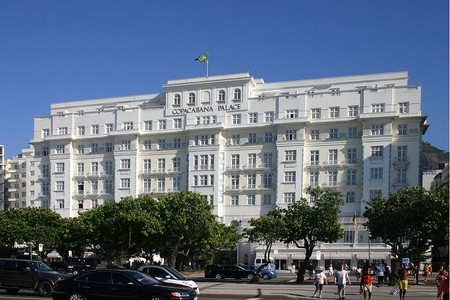 The front of Copacabana Palace |©Charlesjsharp./WikiCommons

The Copacabana Palace is one of Copacabana’s most iconic landmarks and if walls could talk, they would speak of famous guests, fabulous parties and a luxury lifestyle exclusive to the wealthy elite. It may be expensive to stay the night, but that doesn’t stop visitors going there to take photos of its grand exterior. Culture Trip explores the history of this monumental hotel.

The luxury hotel was designed by French architect and designer, Joseph Gire and its façade is a classic example of art deco architecture. The interior is lavishly decorated with gleaming marble floors, imposing pillars and extravagant chandeliers. The hotel has an eight-story main building with 148 rooms, and a 14-story annex with 78 rooms. The front of the hotel overlooks the long stretch of Copacabana beach, providing sea views for the front rooms.

The front of Copacabana Palace | ©Charlesjsharp./WikiCommons

Copacabana Palace also comes complete with a semi-Olympic swimming pool, another swimming pool for VIP guests housed up in the penthouse, a full-sized tennis court, a fitness centre with a fully equipped gym and a three-story spa. There are also three bars located in three different on-site restaurants – one that serves Italian cuisine, another serving pan-Asiatic – known as Restaurante Mee – which also has a Michelin-star, and the third that serves international dishes. 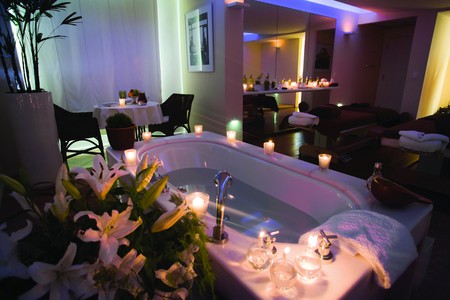 The hotel was built in 1923 and featured in the 1933 film Flying Down to Rio that starred Fred Astaire and Ginger Rogers. The Copacabana Palace enjoyed 40 years of been the most sought-after hotel in Copacabana among the international jet-setters and became synonymous with luxury and high-society. However, it went into decline in the 1960s when Rio de Janeiro lost its capital status and Brasilia was declared the new capital city of Brazil. A few years later in the 1970s, the number of hotels in Copacabana grew, many of which were more modern and affordable than Copacabana Palace, and suddenly the hotel’s exclusive reputation became diluted by the newcomers. Finally, there were plans to close down and repurpose the hotel in 1985.

A post shared by Belmond Copacabana Palace (@belmondcopacabanapalace) on Apr 15, 2017 at 2:26pm PDT

The hotel’s fortunes were revived when Orient-Express Hotels bought Copacabana Palace and refurbished it in 1989. The company’s name changed to Belmond Hotels and they renamed the Palace to reflect the brand’s new name. It is now known today as Belmond Copacabana Palace. Over the last few decades, Belmond Copacabana Palace has hosted some of the world’s most famous artists, musicians and figures, including Madonna, Michael Jackson, Justin Bieber and Brigitte Bardot. One of the most notable guests were the Rolling Stones who gave a free live performance on Copacabana Beach in February 2006. It was later declared one of the biggest rock concerts in the world, with over 1.5 million people attending.

A post shared by Belmond Copacabana Palace (@belmondcopacabanapalace) on Apr 22, 2017 at 10:27am PDT

In 1998, Belmond Copacabana Palace also hosted the Rio de Janeiro Philharmonic Orchestra in the hotel’s Golden Room, a concert that was conducted by the renowned Alexander Fray and showcased music from Mozart and Johannes Brahms. In 2008, it was announced that the palace was a cultural patrimony of Rio de Janeiro, highlighting its significance as a landmark in the city.