What To See And Do In La Boca, Buenos Aires

La Boca is alive with music, brimming with laughter and pulsating with tango beats. The area retains a strong European flavor, with many of its early settlers originating from the Italian city of Genoa. Boasting one of the most popular soccer stadiums in South America, and posing as the romantic setting for a number of tango street performances, a visit to La Boca will transport the traveler head first into the infectious energy of South American life. Here’s our guide to the best things to see and do in this vibrant neighborhood. 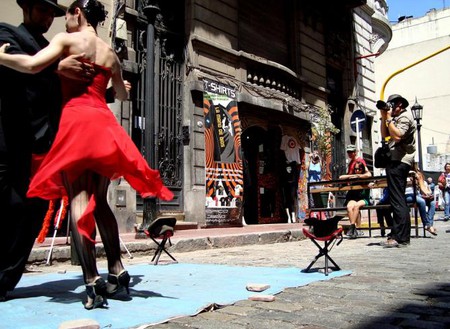 Stroll The Cobblestones Of El Caminito

El Caminito, meaning ‘little walkway’, is a street museum and traditional alley in La Boca. This lane boasts a thriving street with peddlers selling art, buskers playing music and stalls offering trinkets of every variety. Colorful shanty houses line each side of the street and impromptu performances are often carried out by talented tango dancers. Although a top spot to experience Argentine culture, remember to be careful in El Caminito, as tourists are sometimes the targets of theft.

There have been a number of attempts to revive the area of La Boca and transform it into a cultural center. Furthering this cause is the Teatro De La Ribera, a shining beacon of all things artsy, and an intimate setting in which to view a number of contemporary and engaging performances. The theater’s founder, renowned painter Benito Quinwuela Martín, infuses the venue with a celebrity status and gives it an artistic edge; don’t miss the glorious piano in the lobby, a piece Martín painted personally. Since February 2009, when the tango was declared a dance of national heritage in Argentina, the theater has specialized in spreading local, urban music and offering milongas, tango performances and exhibitions celebrating the dance.

Fundación Proa is a cutting edge art museum home to a number of modern and inspiring exhibits. Many of the collaborations presented here are in partnership with renowned international institutions such as Goldsmiths University in London and the Centro de Arte Dos de Mayo in Madrid.

Casa Amarilla is a picturesque replica of the country house owned by Almirante Brown, the legendary Irish founder of the Argentine navy. Built on the outskirts of Buenos Aires to honor the 206th anniversary of Brown’s birth, the building is home to the Department of Naval Historical Studies and boasts an impressive library open to the public.

The tango is a distinctive partner dance which originated in the working-class port neighborhoods of Buenos Aires. Travelers have a great chance to witness tango dancers strut their stuff at the Feria de Artesanos Caminito, a small and lively crafts fair offering a variety of homemade trinkets and tango-themed goods. Dancers and buskers compete for your attention here, and music plays from dusk til dawn. This is a great spot to witness the traditional Argentine dance being performed by proud, talented and passionate professionals.

Former home of artist Benito Quinquela Martín, the Museo Bellas Artes de La Boca Benito Quinquela Martín is a museum exhibiting his magnificent work. The work of other contemporary Argentine artists is also displayed here, and figurative sculptures line the museum’s terrace. The mission of this establishment is to improve communication, social awareness and cultural expression in Buenos Aires. Quinquela personally committed himself to this cause.

Former stomping ground of soccer idol Diego Maradona, La Bombonera, translating to ‘cosy little space’, is known as such due to its unusual shape; it features a “flat” stand on one side of the pitch and three steep stands round the rest of the stadium. The grounds are now home to the Boca Juniors football team, and regularly host rowdy, colorful games. For anyone with a passion for football there is a very good museum here too, the Museo de la Pasión Boquense. Tickets are tricky to get hold of but if you get the chance then a match is unmissable; it’s offers a taste of vibrant, energetic and passionate Argentine life at its best.

Usina Del Arte is a restored electricity factory and a scenic venue in La Boca for dance, theater and art exhibitions. It exudes cutting edge flare, attracting a young local crowd with its buzzing beat nights and spirited tango competitions. A constantly rotating schedule keeps the acts fresh and appealing, and there is a large, open stage area with many rows of tiered seating.

A favorite spot for many superstar celebrities, El Obrero is an authentic Argentine restaurant boasting a clientele including Bono and Robert Duvall. The venue has been run by the same family since 1954, and continues to exude a homely, traditional atmosphere. Expect to find tasty Argentine cooking here, albeit at the pricier end of the scale.