The Story Behind Doumar's, Home of the World's First Waffle Cone 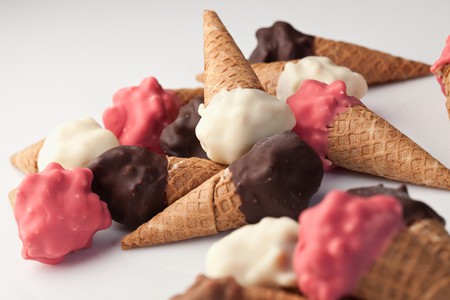 The history of the waffle cone dates back over a century beginning with Abe Doumar. Doumar, a traveling salesman who spent his days selling paperweights to visitors at the World’s Fair in St. Louis, had an epiphany one day while strolling the fairgrounds. One evening, Abe saw the owner of an ice cream stand packing up his things to close because they’d run out of the paper bowls used to serve ice cream. At another stand nearby, a man was making waffles on a single-iron waffle maker. Abe bought a waffle, rolled it into a cone and topped it with ice cream, resulting the in the world’s first waffle ice cream cone! In the following days, the ice cream vendor and waffle salesman continued operating under one stand, selling ice cream cones.

After the fair ended, Abe – an immigrant from Damascus, Syria – began a business with the help of family. He built a four-iron waffle machine from scratch (that is still used today.) What made this particular machine different is that the four-iron machine allowed Abe to roll a waffle while three others cooked. In 1905, Abe opened the first of what would become a chain of Doumar’s ice cream stands stretching from Coney Island to Jacksonville, Florida. Two years later, in 1907, Abe and his brother George opened a stand in Norfolk at the Ocean View Amusement Park. The park, now gone, was once the most popular oceanfront destination and the stand was launched during the 1907 Jamestown Exhibition and became the most successful of all of the Doumar family’s stands. Because of this, Abe relocated to Norfolk permanently.

Responding to demand, the brothers expanded the business and, after hurricane in 1933 destroyed much of Ocean View Park, Doumar’s reopened as a stand-alone restaurant and drive-in at the current location on Monticello Avenue. To keep his business running year round, George added burgers, sandwiches, hot dogs and fries to the menu and began curb service that customers still enjoy today.

Business boomed through the 1950s, but as the suburbs became an increasingly popular place for families to relocate to, customers began eating at more convenient major chains such as McDonald’s. Thankfully, however, Doumar’s persevered through the next decades and success once again returned to the diner.

The menu has expanded since 1907 to include more family favorites such as barbecue, grilled cheese sandwiches, root beer floats and limeades, but Doumar’s still carries on the tradition of serving handmade waffle cones and ice cream. In fact, Doumar’s waffle cones are still made with the same recipe and waffle cone machine built by Abe Doumar.