Situated downtown, the Ann and Roy Butler Hike-and-Bike Trail serves as the core of everything Austin stands for. The trail promotes the city’s natural side, extending from the river along to the urban development it runs through. The trail supports a growing community and is the most popular outdoor space in Austin. Learn how it went from a mere idea discussed on a balcony in London to such an integral part of Austin’s continued development in this brief history.

The idea was simple. With Mayor Roy Butler’s approval they would create a natural open-air space where people could get away without ever leaving the city. The idea came to them to beautify the area around what is now Lady Bird Lake. 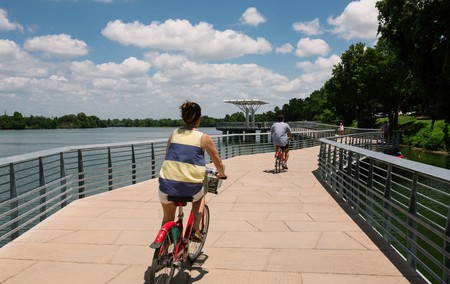 The vision itself was brought to the attention of the general public by Lady Bird Johnson, Mayor Roy Butler, and his wife Ann Butler. They were in London on a balcony looking over at the Thames Path, a nicely formed green trail, when they had the idea to implement a similar trail along what was then known as the ‘Town Lake.’

When they returned to Austin the fundraisers began. The largest was on the LBJ Ranch in 1973, where they raised the largest sum for the project. Lady Bird Johnson commissioned all of the local garden clubs to assist in maintaining the trail’s vegetation, sprinkler system, and more.

The path flows in a 10-mile loop and shares space with both Zilker Park and Guerrero Park, Austin’s largest in the genre. It’s also one of the paths you can take to catch a view of the bats under Congress Avenue Bridge.

In 2014 the boardwalk addition was made in order to close a gap and allowed for more recreational living to take place. The city brought on artists and craftsmen to add their personal touch to the boardwalk, and it’s now one of the prime locations to get a picture of the Austin skyline. 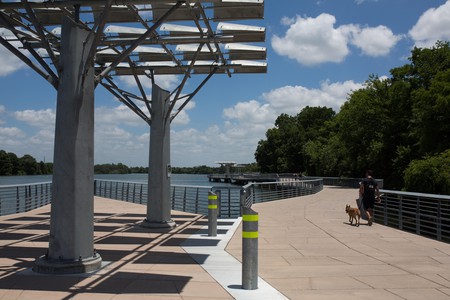 All the work over the years improved the city and an now provides the community with a beautiful area they can escape, play, exercise, and just simply live life to the fullest. Today, apartments and skyscrapers seem to be popping up all around the trail, which seems to suggest urban living truly flourishes when its heart is a rural escape.