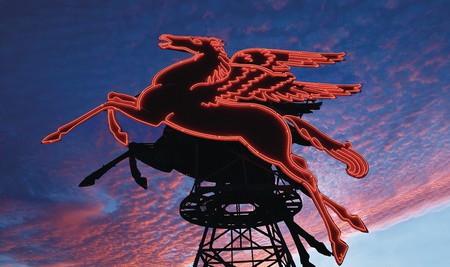 A fixture of the Dallas skyline, a massive neon Pegasus has kept watch over the city for over 80 years.

The image of a Pegasus, the mythical Greek creature that looks like a horse with wings, appears all over Dallas. It’s the logo for the Dallas WNBA team, the Wings, and the name of a plaza downtown. It appears in artwork, like a sculpture outside of Booker T. Washington High School for the Performing and Visual Arts, as the logo for Pegasus City Brewery and even on souvenirs and memorabilia across the city. But the most eye-catching of them all – two massive, neon red Pegasus sculptures perched on top of the Magnolia Building and in front of the Omni Dallas Hotel – started it all.

In 1934, an 11-foot red Pegasus appeared on top of the city’s first skyscraper, the Magnolia Building in downtown Dallas. This Pegasus was built by local sign maker Texlite for the Magnolia Oil Company and featured two mirror images of neon red horses on either side of a structure that rotated, allowing the creature to be seen from all directions.

And seen it was. At 450 feet in the air, some claimed they could see its shining light as far as 75 miles away. It was soon nicknamed “The Flying Red Horse” and was said to be watching over Dallas as it grew into a sprawling metroplex. Locals continuously looked downtown for the creature, while visitors marveled as its soaring height.

After the the new Pegasus took flight, the citizens of Dallas started to wonder what happened to the original. Unfortunately, it was lost, and with little paper trail, the winged horse disappeared for 15 years until Omni Dallas Hotel developer Matthew Southwest gathered a team to search for it. Rumor said that the original Pegasus had been stored at the Dallas Farmers Market and was later moved to Fair Park, but neither place proved fruitful. Finally, in 2015, another rumor led the team to a shed in White Rock Lake, where the original neon red flying horse was found.

Spent a few days in Dallas, Texas and had to stop by to see this guy 👆🏻. Also, in case anyone was wondering…there is no Pegasus emoji 😒. Dallas, do something about this. #dallaspegasus #visitdallas #travelawesome @visit_dallas

After the discovery, it was clear the original Pegasus needed some restorative love. The horse had rusted badly, and surprising to all, multiple bullet holes had torn through the poor beast. At a cost of $200,000, the original Pegasus was restored, placed on a 22-foot oil derrick in front of the Omni Dallas Hotel and the city reclaimed their beloved mascot.

The original neon red Pegasus no longer looks down upon Dallas; he has given that spot to his younger brother. Instead, the original Flying Red Horse looks up at the seemingly infinite Texas sky and sits closer to the people who love and remember him as the guardian of their city.