Welcome to the Caverns of Sonora, the United States’ Most Spectacular Cave 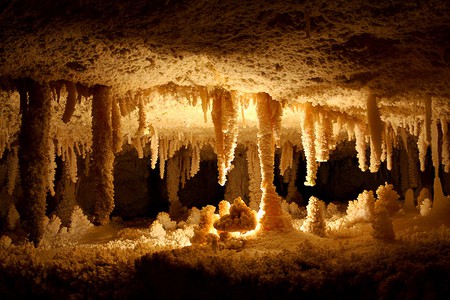 Between San Antonio and El Paso, most people think that there are few reasons to stop in West Texas until you get to Marfa or Big Bend National Park. But located about eight miles (13 kilometers) outside the small city of Sonora is one of the Lone Star State’s most surprising and unique attractions, the beautiful Caverns of Sonora. The founder of the National Speleological Society, Bill Stephenson, described the site as “the most indescribably beautiful cave in the world; its beauty cannot be exaggerated, not even by a Texan.” Here is a brief introduction to the cave’s many wonders.

Of course, like any natural phenomenon, the cave’s history long predates the discovery of humans. Speleologists believe the limestone cave formed between 1.5 million and five million years ago, developing along a fault, which allowed the gases to rise from depths of approximately 1.5 miles (2.4 kilometers) to depths of about 300 feet (91.4 meters). At this point, gases mixed with water in the aquifer, causing highly acidic water to dissolve parts of the limestone, in turn, creating the cave. The famous mineral formations, known as speleothems, formed when the water drained out of the caverns—probably about one to three million years ago. 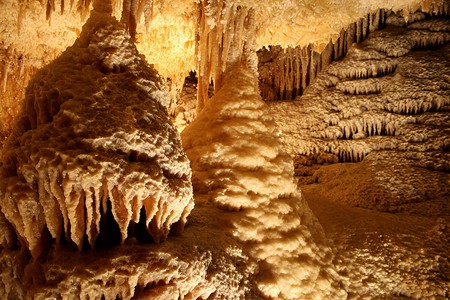 In slightly more recent history, the Mayfield family began ranching operations near the southern region of the cave at the turn of the 20th century. A ranch dog made the initial discovery by chasing a raccoon into a 20-inch opening at the cave’s entrance. Locals began exploring the area, gradually working their way about 500 feet (152 meters) back to a 50-foot-deep (15 feet) pit (now known as the “Devil’s Pit”), which seemingly blocked further exploration. On Labor Day Weekend in 1955, however, four cavers from Dallas crossed a narrow, sloping ledge on top of the right side of the big pit. Safely reaching passages on the other side, they discovered a further seven miles (11 kilometers) of cave networks.

Rumors circulated in the caving community, stories of hitherto unseen formations and untold beauty. A steel gate, to protect the cave from vandalism, was installed at the entrance on June 15, 1957, and the cave was named “Secret Cave.”

Preservation efforts began in 1957 after a caver from Oklahoma noted the spread of damaging human impact while on his frequent visits inside the caverns. With a vision to preserve the cave for future generations, he planned to develop the site into a showcase cave with guided tours, limiting human destruction by increasing awareness and appreciation of its natural beauty. Development began three years later in 1959, adding a fenced access road, two miles (3.2 kilometers) of power lines, a telephone line, water well, and small visitor center.

Opening to the public on July 16, 1960, the cave became known as the “Caverns of Sonora” and was listed on the National Register for Natural Landmarks in 1965. 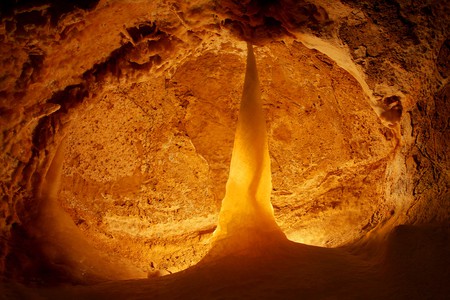 The caverns contain a stunning and abundant array of calcite crystal formations, especially helictites. Many of the formations have garnered nicknames such as the “Snake Pit,” a particularly dense collection of helictites; “Cave Bacon,” a type of flowstone; and the “Butterfly,” formed by two fishtail helictite growths that share the same attachment point on the cave wall. The only known formation of its kind, the Butterfly was the cave’s most famous formation until 2006, when a third of the right wing broke off. 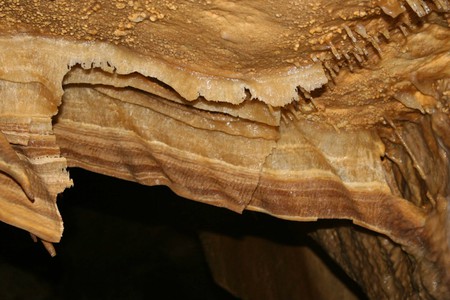 “Cave Bacon” in the Caverns of Sonora | Daniel CD/Wikimedia

Thanks to ongoing preservation efforts, today’s visitors can enjoy two miles (3.2 kilometers) of trail developed from the seven miles (11 kilometers) of explored cave. Three types of tours allow guests to experience the living cave in its natural splendor, complete with crystal corridors and breathtaking underground views. All tours provide an intimate and expertly guided experience, with 360 steps winding to a depth of 155 feet (47 meters).

The Crystal Palace Tours are the most popular, lasting just under two hours and ranging from $16 for kids to $20 for adults (children aged four and under are free). For the slightly more adventurous, the four-hour Discovery Challenge includes the chance to rappel 50 feet (15.2 meters) into the Devil’s Pit under the guidance of an experienced caver. Finally, the Photography Tour grants guided access to trails and the chance to zoom in on all the cave’s unique attractions. 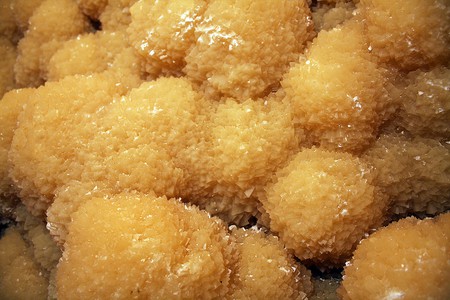 The Caves of Sonora remain a constant 72°F (22°C) year-round, and 98% humidity makes it feel more like 85°F (29°C). Since it is a warm cave, there’s no need for sweaters or jackets, but with 360 steps, visitors will want to wear comfortable walking shoes.

Guests are invited to participate in the site’s ongoing preservation by not touching formations that stick out onto the trails or bringing anything but cameras into the cave. Food, drinks, gum, and tobacco products are prohibited.

Except for Christmas Day, the cave is open daily and year-round from 9 am to 5 pm from the Tuesday after Labor Day to the end of February, and 8 am to 6 pm from March 1st until Labor Day. 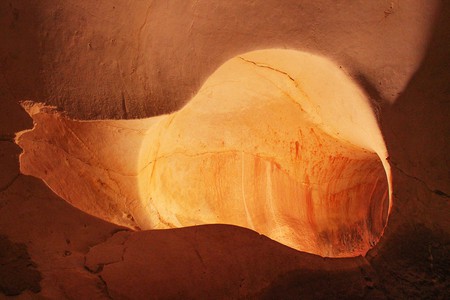 Caverns of Sonora | © Steve Erickson/Flickr
Give us feedback