The Best Things to Do in Cleburne, Texas 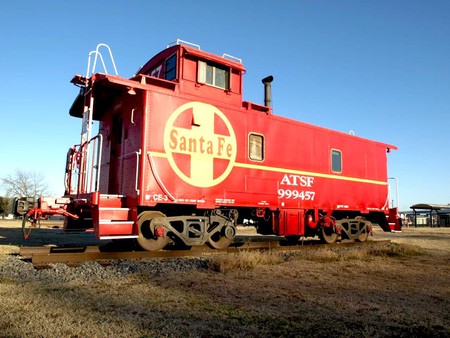 About 40 minutes south of Fort Worth, or an hour southwest of Dallas, is Cleburne, Texas, a quiet little town that’s great for retreating away from city life. From impressive theater performances to professional baseball, here are the best things to do in Cleburne.

Take in a ballgame

In 1906, the Cleburne Railroaders were a minor league baseball team that won the Texas League championship. The team in Cleburne dissolved after this season, leaving the town baseball free for 111 years. In 2017, a professional baseball team called the Cleburne Railroaders – named after the championship team from 1906 – started playing at the snazzy new Depot at Cleburne Station, and fans have loved them since. Last year, the new ballpark was voted as the best ballpark in independent baseball for good reason. The $25 million ballpark has 1,750 fixed seats, luxury suites, a luxury club, a party deck, a picnic area, a bar, grass berm seating, bleacher seating, and a kids zone. Regular season games are May through September. Keep your eyes open for Spike, the team’s overall-wearing mascot – a rail spike.

For a small town, Cleburne’s museum scene is highly impressive. Whether you’ve seen Gone with the Wind or not, a visit to the Gone with the Wind Remembered Museum is a must. The curator of the museum has been collecting Gone with the Wind artifacts for more than 30 years and has more than 6,000 items in the museum, including original costume pieces from the movie, one-of-a-kind dolls, original and signed first editions of the novel, vintage promotional products, and more in this Smithsonian-quality museum. The Chisholm Trail Outdoor Museum and the Big Bear Native American Museum are two great museums located next to each other that offer visitors the chance to see a working blacksmith, re-enactments of early pioneer life, a restored schoolhouse and Native American artifacts like headdresses, pottery, arrowheads, beadwork, and more. The Layland Museum of History has 50,000 artifacts and 100,000 photographs that allow visitors a look into local history from the area. 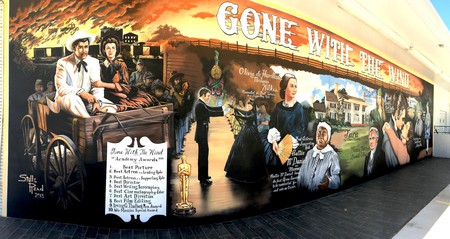 Great theaters are often overlooked, and the Plaza Theatre Company is no exception. Top-notch productions of To Kill a Mockingbird, West Side Story, Treasure Island, A Midsummer Night’s Dream, and more take place in the newly renovated Dudley Hall, which has almost doubled the company’s seating capacity. The troupe has presented more than 120 live productions some 2,500 times since its opening in 2007, including shows for children. Larger productions take place in Dudley Hall, while the venue on Main Street still hosts kids shows.

Worry not about finding good grub in Cleburne. The town is full of great places to sit down and have a bite. The Purple Turnip has an eclectic menu of sandwiches, salads, pasta, and more, and is known for its key lime and coconut cream pies. For a great local burger, Burger Bar serves up a classic flat-top patty in its tiny establishment. Inside, there is only enough seating for about four people, but there are picnic tables outside and many order to-go and eat in their vehicles outside. If Burger Bar seems too busy, head over to Grumps Burgers, a small chain – there are only four in the state – turning out incredible burgers with toppings like queso, guacamole, and chili, alongside sides like fries, fried pickles and jalapenos, and onion rings. For casual Tex-Mex food, La Cima makes savory brisket tacos, enchiladas, fajitas, and an array of Mexican-inspired dishes. For Southern comfort food, Susannah’s Homestyle Cooking serves up breakfasts of biscuits and gravy, omelettes, hash browns and morning favorites, while lunch means chicken fried steak, roast beef sandwiches, fried catfish and shrimp, hamburger steak, pork chops, and plenty of iced tea to wash it all down. 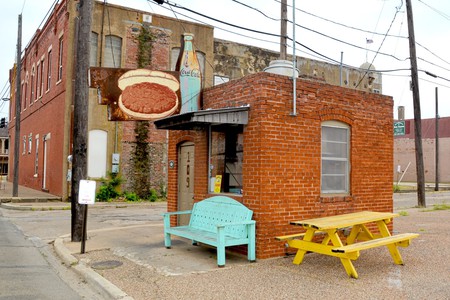 Browsing through antique stores and boutiques can yield unique finds not available in department stores. Bus Depot Antiques and Marketplace is great for vintage finds from more than 35 vendors. Expect antique furniture, jewelry, and handmade items. Red Horse Antique Mall is set in a former Montgomery Ward building and has a cafe to restore energy after rummaging through loads of antiques, and the Shabby Shack has trendy home decor, candles, bath products, clothing, and seasonal gifts. Tell a local what you’re looking for, and they’ll point you in the right direction.

Sleep in a historic hotel

Boutique Hotel
Facebook
Email
Twitter
Pinterest
Copy link
Share
Map View
Located in downtown Cleburne, Liberty Hotel is a great place to wind down after a busy day. The hotel was built in 1924 and was a lively place to be in its early days. It even hosted Lawrence Welk and his band in the ‘30s. The hotel offers free WiFi, an outdoor pool, a fitness center, and free continental breakfast.
Book Now
Give us feedback