The 12 Craziest Food Challenges in Texas 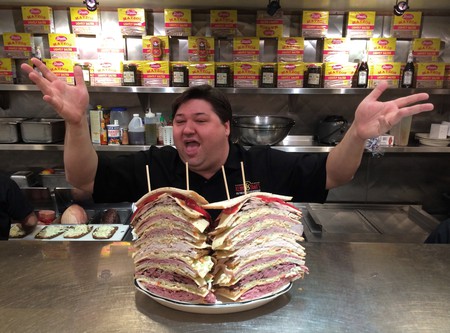 If you love shows like Man V. Food or watching the Nathan’s Hot Dog eating contest on TV, you’ll love these crazy food challenges in Texas. Some are Texas-sized and others prey on the spicy-food reputation of Texas. Whatever the case may be, they’re all pretty extreme, and beg the question: can your stomach handle it?

The Big Texan Steak Ranch opened in 1960 in Amarillo, Texas, off Route 66 and has since became nationally known for one of the craziest food challenges in the world, which involves eating a 72-ounce steak. The 72-ounce (2,041 grams) steak challenge was created in 1962, when the owner Bob Lee brought a group of cowboys together to see who could eat the most steaks in an hour. The contest turned into one cowboy who amazingly ate four and a half steaks, a salad, shrimp cocktail, baked potato, and a roll – which then became the challenge. From now on, any visitor who can eat the same 72-ounce meal in one hour will receive it free. Keep in mind that the rules require you to pay the full $72 cost up front and any illness disqualifies you. 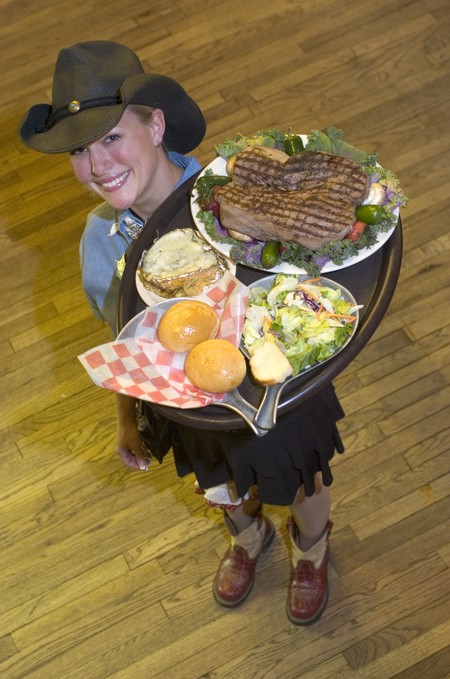 Kenny’s Burger Joint has two locations in Frisco and Plano, Texas, and it has a Texas-size burger challenge. Named “El Jefe Grande,” challengers have one hour to finish a 7-pound (3.17 kg) burger filled with beef, cheese, veggies and fries in between a huge ciabatta bun. Those who can eat El Jefe Grande will go home with a free meal, free T-shirt, picture on a wall of fame and a $100 gift card.

The Ol’ South Pancake House is a charming 24-hour breakfast diner in Fort Worth, Texas. As the name implies, its crazy food challenge involves pancakes. Eat eight pancakes in 60 minutes and they’ll waive the $19.99 fee. The Pancake Challenge isn’t available Saturday or Sunday from 6 a.m.–2 p.m. Syrup and pancakes, anyone?

Kenny and Ziggy’s New York Delicatessen Restaurant is a Houston favorite, offering New York deli food and contemporary cuisine. The food at Kenny and Ziggy’s is popular among Houstonians, however it’s the Zellagabetsky challenge that has put it on the map. The food challenge consists of an eight-decker special cut rye sandwich with corned beef, pastrami, turkey, roast beef, salami, tongue and Swiss cheese with coleslaw, Russian dressing and red sweet pepper. Even though the sandwich costs $65.00, those that finish the gigantic sandwich on their own will receive a free cheesecake.

Bistro B: A Giant Bowl of Pho

Can you handle spicy foods? The 4 Horsemen Challenge at Chunky’s Burger in San Antonio, Texas, pushes the spice limits of even the strongest taste buds. The 4 Horsemen is a $21.99 burger with fresh jalapeno and serrano peppers, a habanero sauce and the infamous ghost pepper. Challengers who wish to take on the heat have 25 minutes to the eat the burger and a five-minute waiting period. The burger is so hot it was named the “Hottest Burger on the Planet” by the Travel Channel’s Man V. Food. Those who can complete the challenge will have their picture on the Wall of Flame. So, the question is – can you handle the heat? 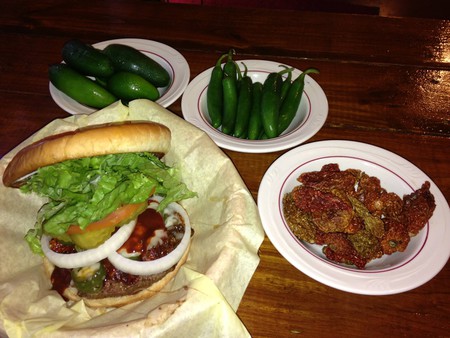 Twenty-eight inches (71.12 cm) of pizza is no easy feat for two people, but that’s exactly what’s found at Brooklyn Heights Pizzeria in Austin, Texas. The Pizza Challenge requires one or two people to eat a giant 12-pound (5.44 kg) pizza with four veggies or two meat toppings. The pizza costs $45, but if the challenger(s) eats the entire pizza (crust included) in an hour, they win $200. Not a bad deal, if you can manage all that pizza.

Hullabaloo Diner of Wellborn, Texas is well-known for their Aggie Special, perhaps a nod to the large pride of the nearby college, Texas A&M University. The Aggie Special consists of a 12-egg omelette of any or all of the following ingredients: bell pepper, onion, mushroom, tomato, jalapeno, cheese, ham, bacon or sausage. It can then be covered with green chili or gravy. This food challenge costs $20, but for those that eat it all, they’ll receive a free T-shirt. If you’re short on cash, you might want to eat it quickly and beat the fastest time so that the omelette will be free.

Some food challenges run the risk of causing the participants to throw up, but the food challenge at Hypnotic Emporium, an ice cream shop in Dallas, would give you the brain freeze of a lifetime. The Mt. Hypnotic is the craziest ice cream concoction you’ve ever seen. There’s 20 scoops of ice cream topped with whipped cream, hot fudge, caramel, Sixlets candy, peanuts, two Charleston Chew chocolate bars and a doughnut. If all that sugar wasn’t enough, you must eat it all by yourself in 30 minutes to get the $38 ice cream concoction for free. Now, that’s a hard challenge to win! 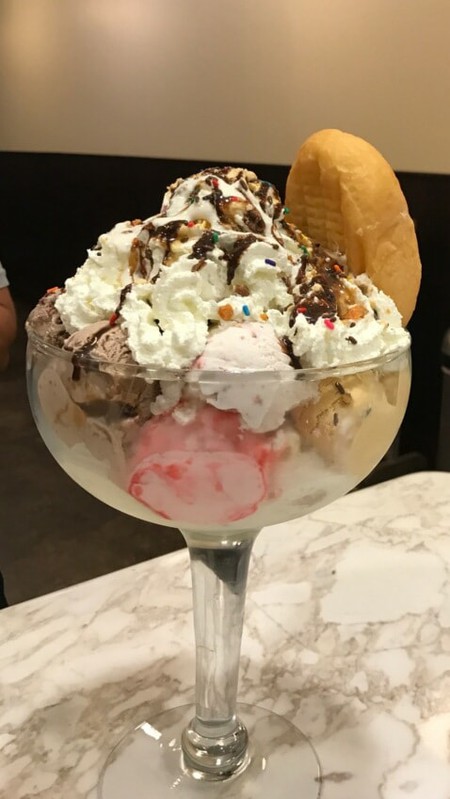 A Texas food challenge that's sure to give you a brain freeze: the Mt. Hypnotic Challenge. | © Hypnotic Emporium

Tubing isn’t the only thing to love about San Marcos. The Chupacabra Challenge consists of eating a full rack of ribs, 24 nuclear hot wings, a burger, a basket of fries and a basket of onion rings. That’s a lot of food – all of which must be consumed in 45 minutes. Winners will receive a free T-shirt and their meal free (and perhaps, a tummy ache!).

Fred’s Downtown Philly has a few locations in the DFW area that claims to have the best Philly cheesesteaks outside of Philadelphia. It for sure has the biggest. Its challenge is called the Liberty Bell and it’s a 5.5-pound (2.49 kg) Philly cheesesteak on a two-foot (.66 yard) hoagie roll and a side of fries. Customers must finish the Liberty Bell in 30 minutes to receive their meal for free and appear on the Wall of Fame.