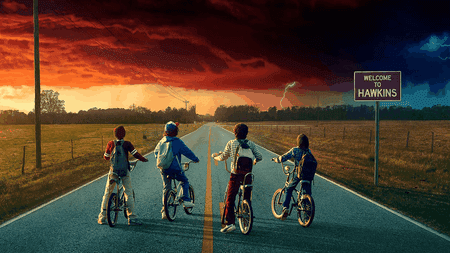 On Friday, Oct. 27, we finally return to Hawkins, Indiana—and most likely the Upside Down, too—when Stranger Things returns to Netflix for its second season. While waiting two more weeks feels like a punishment which no crime warrants, soundtrack breakouts Kyle Dixon and Michael Stein of the band S U R V I V E have delivered their first taste of the new soundtrack to ready our approaching journey.

When we, the audience, weren’t holding out hope that Barb’s death was just a cruel ruse, shaking in fear at the sight of the Demogorgon, or practicing a strictly Eggo diet thanks to Eleven’s snacking habits, we were eagerly scouting Google to find out who was behind the show’s incredible music. Now, just over a year and a pair of Grammy nods later, the Austin synth quartet S U R V I V E are household names, and Dixon and Stein’s contributions to the second season of Stranger Things is almost hotly anticipated as the show itself.

Today, we finally get to hear the first of the soundtrack’s 34 parts. Titled “Walkin’ In Hawkins,” the song steadily builds a series of synth loops that visualize a crisp, autumn hike, yet still maintaining that ominous prickling within all of its pleasantness. Give the track a listen below.

“In Season 2, we’re introducing new styles of composition, while still revisiting old themes when appropriate,” the composers explained in a statement. “We’ve created new elements that are necessary to support the story, but still want to remain true to the sound of Season 1.”

Previously, in an interview with The Vinyl Factory, the duo stated that the sophomore score would be “a bit darker and weirder.”

The Season 2 soundtrack arrives on digital platforms on Oct. 20. You can check out the tracklist below, along with a Friday the 13th-themed teaser for the season’s final trailer which arrives on—you guessed it—Friday, Oct. 13.