Is it Actually Illegal to Pick Bluebonnets in Texas? 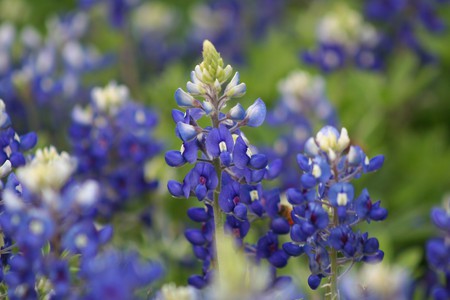 Every spring, waves and waves of blue flowers cover the Texas countryside and it’s easy to imagine how Texas would have looked 265 million years ago underwater. The famous blue flowers, known as bluebonnets, hold a special place in the heart of Texans. It’s perhaps this love and pride that causes people to ask whether it’s legal to pick a bluebonnet or not. We have the inside scoop!

On March 7, 1901, Texas adopted the bluebonnet as the official state flower. The bluebonnet is native to Texas and thanks to a 1930’s beautification project by the Highway Department, bluebonnets appear along most major highways throughout the state between March and May. They’ve grown so much in popularity that it’s common to see people pull over on the highway to take photos or travel to Ennis, Texas, the Official Bluebonnet City of Texas, to experience the Bluebonnet Trails Festival every year.

With this beloved flower has come a tall tale the size of Texas. The question is, is it illegal to pick a bluebonnet?

The answer is… mostly no.

Some laws even mention that it’s illegal to damage or destroy government property, so digging up a large clump of bluebonnets on the highway is probably not a great idea, no matter how good they’ll look in your garden.

If an adorable springtime photo with bluebonnets and the family is a must, remember that it’s illegal to trespass on private property. Also, keep in mind that taking a photo in front of the flowers is better than sitting and crushing them, as they’ll be unable to reseed and those beautiful bluebonnets we all love will be missing next season.

The secret is out — while it’s technically not illegal to pick bluebonnets unless they’re on state land, we should be mindful that picking a bluebonnet might mean one less beautiful blue flower the next year. As the official state flower song, “Bluebonnets,” by Julia D. Booth and Lora C. Crockett, goes, “They’re as blue as the deep, deep sea / Their smiling faces bring gladness / For they bloom for you and for me.” Let’s keep it that way.