An Introduction To The Whimsical World Of Wes Anderson 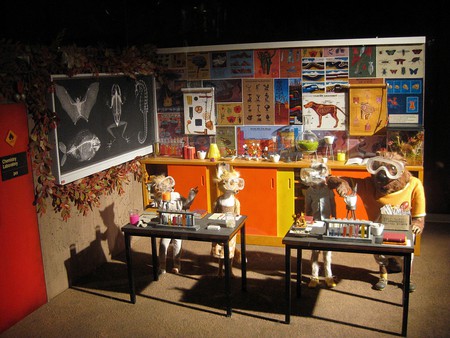 Wes Anderson is a master of style with a flair for quick-witted comedy and eccentric characters. A Wes Anderson movie is instantly recognizable by the deadpan shots, symmetrical architecture, nostalgic settings, and bright pops of color that are trademarks of his production style. The whimsy, and occasional absurdity, of Anderson’s films lighten the heavy, nostalgic themes that hold a regular presence in his movies. Family strife, coming-of-age, and the struggle for redemption often guide his stories.

Over the course of the eight films Anderson has written and directed, he has established himself as one of the leading filmmakers of the present era. Wes Anderson grew up in Houston, TX and began making short films with his father’s Super 8 camera. Anderson created his first feature-length film, Bottle Rocket, in 1996—six years after graduating from the University of Texas at Austin with a degree in philosophy. Bottle Rocket was based on a short film he made with Owen Wilson who he met in college and would go on to star in and co-write several of Anderson’s films.

Anderson would direct seven more feature films over the following two decades. His films have earned him over 90 film award nominations and wins. He has worked with the same actors for several of his films including Bill Murray and the Wilson brothers. He is rumored to currently be working on a stop-motion film about a dog. Until that project is released, these films are a great starting point for your journey into the whimsical world of Wes Anderson.

Max Fischer has found himself a new extracurricular activity to pursue. Max is an eccentric, romantically (but not academically) ambitious student of Rushmore Academy with a vow to win the heart of a Rushmore teacher, Rosemary Cross. He turns to Herman Blume, an industrialist and the father of two of Max’s classmates, for advice on wooing his teacher. But Blume takes his own advice and begins dating Rosemary. A war of revenge is soon declared. Released in 1998, Rushmore was Anderson’s second film and is still lauded as one of his best comedies.

What happens to a child prodigy that peaks too soon? Meet Margot, Chas, and Richie—three extraordinarily talented children who have just learned that their parents, Royal and Ethaline, are separating. Now flash forward 22 years. Royal announces that he is dying and only has six weeks to live. For the first time in two decades, the family reunites under one roof to tell a story of love, disappointment, redemption, and family. Wes Anderson co-wrote the movie with Owen Wilson earning them both a 2002 Academy Award nomination for Best Original Screenplay.

Anderson makes his first foray into animation with this stop-motion film about a fox, his friends, and his mid-life crisis. Mr. Fox and his wife used to go on thrilling farm raids, but gave it up to start a family. Two years later, Mr. Fox is itching to feel that excitement again. He gives in and raids his neighbors’ farms—bringing the wrath of the farmers on his family and friends. Anderson and Jeremy Dawson co-wrote the film based on Roald Dahl’s novel of the same name. An all-star cast voices the characters including George Clooney, Meryl Streep, Willem Dafoe, and Bill Murray.

Sam and Suzy are 12-year-old pen pals who made a secret pact to run away together. Sam is attending Camp Ivanhoe for the summer on the island where Suzy lives. They both slip away, meet up, and run off into the wilderness armed with camping gear, some books, and a kitten. Now they’re on the run, with the police and a troupe of scouts closing in on them. The film is a coming-of-age story about young love, maturity, and finding somewhere to belong.

Gustave is the concierge of the beautiful, mountainside Grand Budapest Hotel in a period of peace between the First and Second World Wars. After an elderly hotel guest dies and leaves him a priceless painting, he is accused of murder by her greedy family. The movie follows Gustave and his lobby boy Zero as they set out on an adventure to keep their freedom, the painting, and the hotel. The film is set in a fictional town but is shot against a beautiful German background and mirrors the changes Europe faced during World War I and World War II. This film shines in its design aspects and won several Academy Awards; inlcuding Best Original Score, Best Production Design, Best Costume Design, and Best Makeup and Hair.