A Brief History Of An America Favorite, Pecan Pie

In the Southern United States pecan pie is a staple during the holidays and enjoyed just as much year round, which is no surprise given that pecans grow throughout various different Southern states like Texas, New Mexico, Oklahoma, Arizona, and Louisiana. The origin of the pie stems back to the late 1800s but some evidence also suggests it may have been introduced even earlier.

There’s proof that pecans were a popular item in the diet of Native Americans over 10,000 years ago; the word pecan itself is said to derive from the Algonquin word meaning something along the lines of ‘hard nut to crack.’ Although the nut is extremely protected by its shell and not easy to crack it didn’t stop the Native Americans from exploiting it as a major staple in their diet. When sources of protein were exhausted the Native Americans discovered the sustaining powers of nuts. They found that the pecan gave them just as much, if not more, energy and nutrition as the bison did. One theory for the origin of pecan pie suggests that Native Americans introduced the pecan to the French, who settled in New Orleans and – thanks to their innate baking prowess – soon after invented the pecan pie as we know it today. 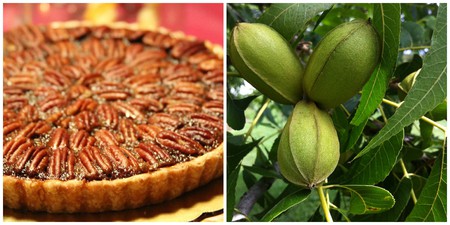 Texas cookbooks dating back to the 1870s include recipes with pecans, but that which most resembled pecan pie surfaced in a cookbook published in St. Louis in 1898. However, it was the 20th century invention of Karo syrup that really pushed the pie into the spotlight.

The pecan pie filling is generally nuts, eggs, butter, sugar, and some form of syrup. Karo Syrup was so widely used in pecan pie recipes because the manufacturer placed a simple recipe for pecan pie on their label. Thus, the popularity of Karo syrup in turn heightened the popularity of the pie itself; its notoriety spread not only throughout the South but the entire United States. You may find many of the more traditional pecan pie recipes still use Karo syrup, although there are many other ingredients you can use in its place like maple or corn syrup.

Now pecan pie is made throughout most southern bakeries and diners. A trip to New Orleans wouldn’t feel complete without a warm piece of pecan pie and cold vanilla ice cream on top. It’s nutty and sweet with a savory crust. Though these many different claims as to where and how the pie originated point to an elusive beginning, there’s no doubt as to how popular the pie has become and how much it’s enjoyed throughout the year.