12 Reasons to Visit Texas Over California 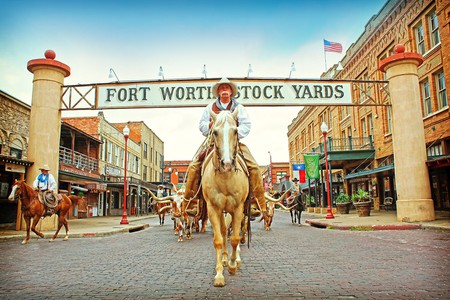 Have plans to visit California? Hit the pause button! Though it’s hard to compare states in the U.S. as many have their own personalities and things to do, it could be argued that your next vacation should be in Texas and not California. You might ask why, considering California has Hollywood and the Golden Gate Bridge and Disneyland…which is true. But trust us, visiting Texas is a better bet, and here’s our 12 reasons why.

Yes, California does have Mexican food, but it’s the type of Mexican food you can find anywhere else in the U.S. As for Texas, it has Mexican food, and it has Tex-Mex, a mashup of Texan and Mexican food to form a delicious type of cuisine. Love cheese? The Tex-Mex of Texas offers it in a new way – as a bowl of queso, a melted cheese dip sometimes enhanced with shredded beef used to dip your tortilla chips in. In California, they’ll offer you margaritas on the rocks in a six-ounce glass, but in Texas, they go big with goblets of frozen or on-the-rocks margaritas. And then there’s the breakfast taco craze best highlighted in Austin, Texas. Tacos with breakfast fillings like eggs, sausage, potatoes and cheese – doesn’t it sound like a food heaven?

Sports fanatics will quickly find a home in Texas. Not only are there a large handful of professional sports teams found in almost every major city in Texas, but college and high school sports are taken just as seriously and enjoyed with (sometimes more) gusto. It’s so widely known that sports are king in Texas that it appears in pop culture like Friday Night Lights, Glory Road, Varsity Blues and My All American. While California may have professional sports teams and somewhat of a popular college following, they don’t have towns and cities that literally shut down for games. That’s how serious sports are taken in Texas. 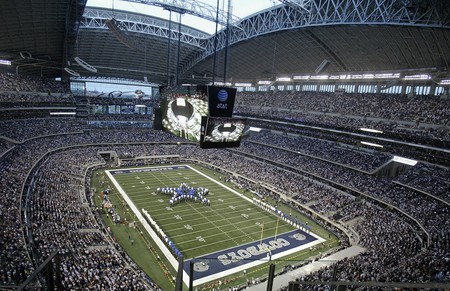 They say money talks, and that’s often the case with traveling. When comparing Texas to California, a dollar goes a longer way. The average daily cost of travel in Texas is $174, while in California it’s $178. Four dollars might not seem like much of a difference, until you start comparing the average cost of visiting the biggest cities of each state. Houston, San Antonio and Dallas have an average daily price of between $103 and $153, where Los Angeles, San Diego, and San Francisco have an average daily cost over $172. While Austin has a significantly higher average daily travel cost, with so many free things to do and cheap tacos to enjoy, a budget-friendly trip to this Texas favorite is possible.

California may be known for their beaches and longer coastline, but Texas has beaches, too. Better yet, the ocean water is much warmer in Texas than California, making for a more amicable summer swim session. Where California oceans range between 52° and 68° in the summer, Texas oceans reach near 86°. Whether you’re swimming off the coast of South Padre Island, Galveston or Corpus Christi, there’s plenty of warm ocean and beach fun to be had in Texas.

Texas is a meat-eater’s paradise for one reason: barbecue. With over 2,000 barbecue joints across the state, visitors to Texas can enjoy the most delicious slab of ribs, pulled pork sandwiches, brisket, sausage and homestyle sides like buttery mashed potatoes and mac ’n’cheese. You can find barbecue in every city, every small town and often, the best of the best is discovered in little hole-in-the-wall joints or out of gas stations. If you like big portions, hearty food and the sizzling flavors of Texas barbecue – visit Texas. If kale is your thing…well, there’s California.

Adventure parks that are (actually) thrilling

We can’t deny that Disneyland has a cult following, and Texas isn’t trying to compete with that. But while Disneyland-goers enjoy adorable, relatively mild rides, those in Texas are screaming their heads off at thrilling adventure parks. Not only is Texas the birthplace of the Six Flags theme parks (the original is in Arlington, Texas), but it’s also home to Schlitterbahn, which has been voted the world’s best water park for 19 years in a row! 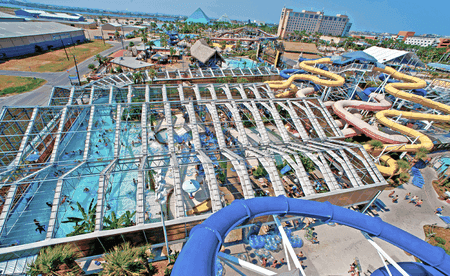 An underrated nature scene ripe for the picking

California state and national parks are wonderful. They have the Redwoods, Yosemite and Joshua Tree, popular mountain areas like Big Bear and a beautiful wine country. Everyone knows California nature is an amazing place to explore, but why deal with the crowds when you can enjoy the underrated nature scene of Texas? Instead, explore Big Bend National Park, one of the most isolated mountainous parks, one of the best places to stargaze and the largest protected area of Chihuahuan Desert in the U.S. East Texas has lush bayous at Caddo Lake for great kayaking adventures, while the Caverns of Sonora has one of the best crystal formations in the world. There’s also Palo Duro Canyon, the second largest canyon in the U.S., the Rio Grande, a popular tubing favorite, hiking and water holes in Hill country and so much more.

While there are plenty of NASA visitor centers around the U.S., Houston, Texas, is home to one of the only places where visitors can see astronauts train for space missions – Space Center Houston. One million visitors each year have the opportunity to take a behind-the-scenes tour and see an eight-story-tall, full-scale shuttle replica. If all that wasn’t enough, there’s hands-on activities (including touching a real moon rock) that are far beyond anything you can find in the U.S., including the NASA centers in California!

Californians boast about In-N-Out and Del Taco, but in Texas, that’s child’s play. The Texas fast food game beats out California every time. Whataburger, Braum’s and Dairy Queen are just three burger-joint chains that outshine In-N-Out burger all the time in Texas. Del Taco? No thanks – because Texas has Taco Casa, Taco Bueno and Taco Cabana, known for sizzling fajitas you can grab through the drive-thru. Sonic, Golden Chick, Chicken Express and every local gas station throughout the state that serves up a mean selection of tacos or fried foods are just a few more reasons to visit Texas over California. 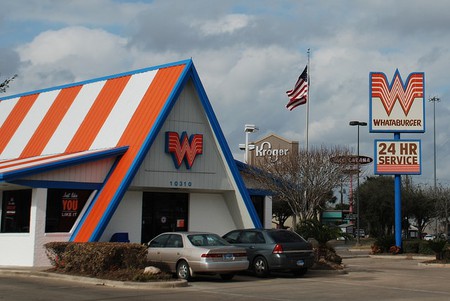 More shopping than you can handle

Fashion designers may flock to California but if you want to actually buy fashion versus creating it, Texas is the way to go. Texas has a quarter of all the retail shopping malls in the U.S. and the Galleria in Houston comes in at number six among the largest shopping malls. Let’s not forget that Dallas Fort Worth has the most shopping centers per capita than any other U.S. city, and was the birthplace of fashion giant Neiman Marcus. If big malls aren’t your thing, Texas has a wonderful collection of small towns with unique shopping experiences like Fredericksburg, or even flea markets like Trader’s Village that will make you say wow.

Have a full-on experience with cowboy culture

Remember playing cowboys as a kid? California may have had its fair share of cowboys during the Wild West days, but Texas is still where it’s at for authentic cowboy experiences. It’s easy to catch a rodeo throughout the state or go two-stepping at Billy Bob’s Texas in the Fort Worth Stockyards. Live like cowboys at Twin Elm Ranch or one of the many other dude ranches throughout the state. And don’t forget to grab a pair of authentic cowboy boots while in Texas. It’s a shopping must-buy!

Texas hospitality is a real thing

Politeness is almost as important as sports in Texas, so it goes without saying that Texas hospitality is a real thing. That’s not to say that Californians aren’t kind, but there’s no common saying for “California hospitality.” In Texas, you’re treated like family, fed big helpings with a smile, said hello to on the street by complete strangers or wished farewell with a “Y’all come back now, you hear!”