11 Wonderful Things You Can Only Do in Tennessee 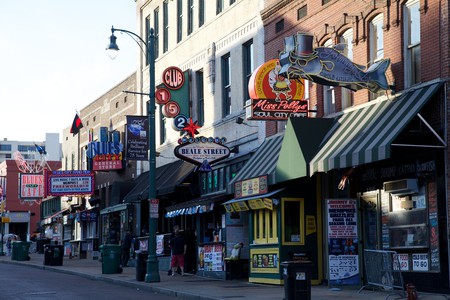 Ask any Tennessean what the best things to do in the state are, and they’ll probably have a lot to share. That’s because Tennessee has a mile-long list of things to offer. But some things you can only do in the Volunteer State. Want to experience Tennessee in the most genuine way possible? Here are 11 things to do that make this wonderful state worth visiting.

What was once home to “The King of Rock and Roll” is now a mansion that sits on 13.8 acres of land in Memphis. The museum, named Graceland after the original owner’s daughter, is now a National Historic Landmark that gets over 650,000 visitors a year. The only home to attract more visitors annually in the U.S. is the White House. Graceland has two levels and a basement, and the late Elvis Presley is buried on the grounds alongside a memorial gravestone for his twin brother, Jesse Garon, who died at birth.

Some of the fascinating things to find inside the mansion include the Jungle Room where Elvis recorded his last two albums, the three Grammys he won, and both his and Priscilla’s wedding attire. The basement has the TV room where the King spent time watching three television sets at once, and in the living room hangs a painting that was a Christmas present from Elvis’ father. The second floor of the mansion has been untouched since the day Elvis died and is not open to the public (since it was in the second-floor bathroom where he suffered the heart attack that led to his death). 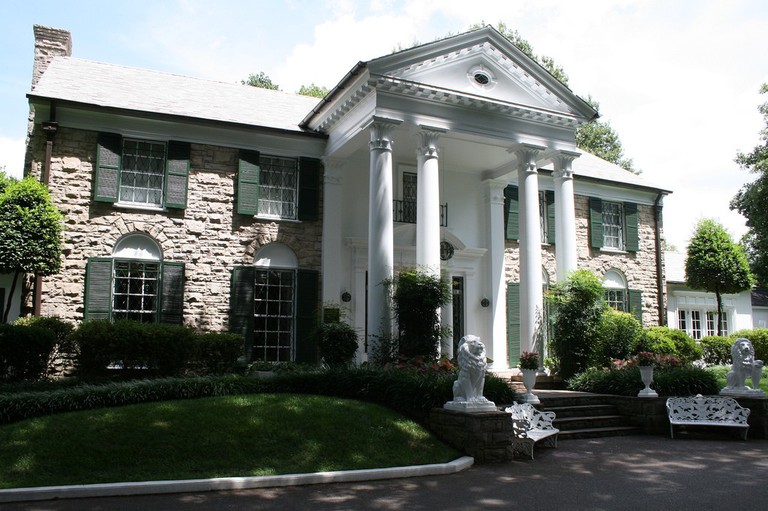 The Ryman Auditorium is called the “Mother Church” of country music and continues to be a place where country artists and other musicians perform year round. It was known as the home of the Grand Ole Opry from 1943 to 1974 and stands today as a 2,362-seat performance auditorium in downtown Nashville. This historic venue is where Johnny Cash met his wife June backstage and has also been a place where memorial services have been held for several prominent country artists. People like Chet Atkins, Waylon Jennings, and Tammy Wynette have all been memorialized at the Ryman.

Not only does immeasurable talent grace the Ryman stage each night, there are also seasonal shows: Opry at the Ryman shows in the winter, Opry Country Classics during the spring and autumn, and Bluegrass Nights at the Ryman each summer. All of these shows are broadcast on 650 AM WSM, the radio station that has long been home to the Grand Ole Opry.

As part of the Ryman’s 125th-anniversary celebration, Little Big Town will be performing nine shows at the venue over the course of the year, becoming the first artist-in-residence. 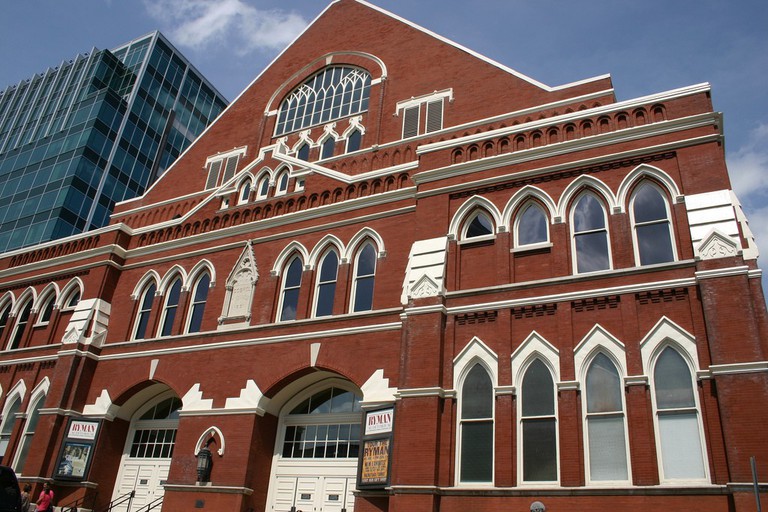 Take a walk down Beale Street

Originally called Beale Avenue, this street in downtown Memphis is where many blues clubs and musicians got their start. It was created in 1841 by entrepreneur Robertson Topp, who named the street after a military hero. After W.C. Handy wrote a song called “Beale Street Blues,” the name was changed from Beale Avenue to Beale Street. From the 1920s through the 1940s, musicians like Louis Armstrong, B.B. King, Muddy Waters, and Rufus Thomas played on Beale Street and helped develop the music style known as “Memphis Blues.” B.B. King earned the nickname “Beale Street Blues Boy.”

American songwriter Marc Cohn was so impressed with the city that he wrote the song “Walking in Memphis,” which he has said is “100 percent autobiographical.” This tune was born from his experience visiting Memphis back in 1985 when he was a session singer in New York City. Considered his “signature song,” it makes several references to Memphis, its lifestyle, and the prominent figures who made their mark in the city. The chorus hook line references Beale Street with the lyrics, “Then I’m walking in Memphis./I was walking with my feet ten feet off of Beale.”

Held in the town of Bell Buckle, the annual RC-Moon Pie Festival takes places the third Saturday in June. The family-friendly event celebrates two Tennessee drink and food staples: RC Cola and the Moon Pie. There’s a 10-mile run to start the day and a parade to crown the festival king and queen. The grand finale is where visitors can expect free dessert thanks to the cutting of the World’s Largest Moon Pie. With live music, games, contests, and cloggers, this festival has been a Bell Buckle favorite since it first started in 1994. 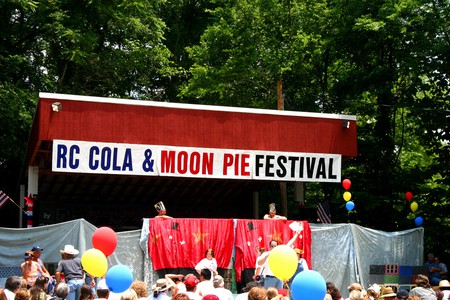 Anyone who’s seen the commercials for Bush’s Baked Beans knows that Jay Bush, the great-grandson of the company’s founder, isn’t giving away the family’s secret recipe. But there’s still the opportunity to take a closer look at how the beans are made and learn more about the Bush family’s story at the Bush’s Beans Factory. It’s located in Chestnut Hill, approximately 40 miles from Knoxville. Housed in the original A.J. Bush & Company general store, the tour travels from 1897, when the business began, through to the present day.

Walk through a giant replica of a Bush’s Baked Beans can, and get a glimpse into the methods of processing and canning beans. For die-hard fans of the Bush’s brand, the gift shop sells cookbooks, cookware, and Bush family (and Duke the dog) memorabilia. 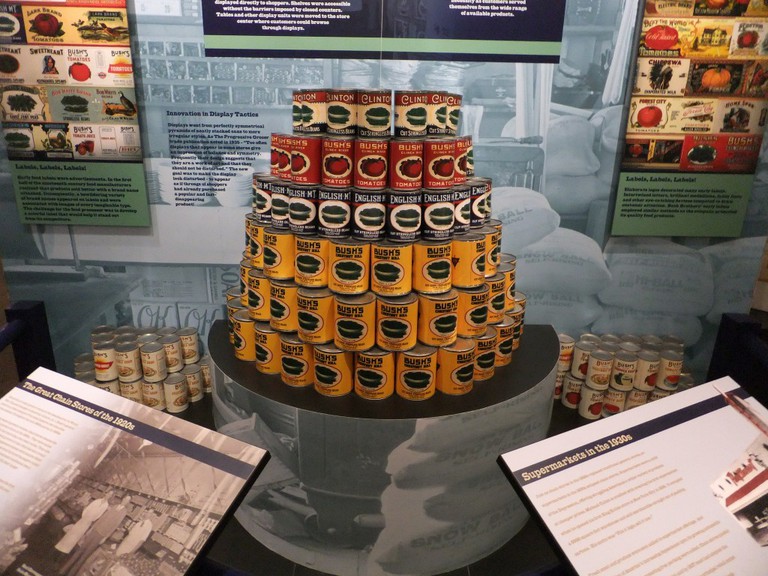 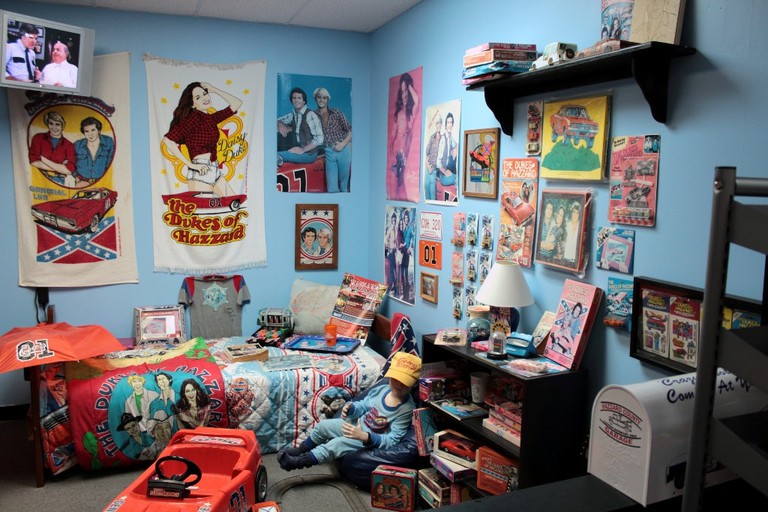 © Ayleen Dority / Flickr
Fans of Dukes of Hazzard know who Cooter is. Once the show ended, the real-life Cooter, actor Ben Jones, went into politics and served as a U.S. congressman in Georgia from 1989 to 1993. Today, he owns the fittingly named Cooter’s Place in Nashville, a museum with pictures, props, and memorabilia from the show. There is also a replica of the iconic 1969 Dodge Charger known as General Lee, as well as Cooter’s tow truck, Daisy’s Jeep, “Dixie,” and Sheriff Roscoe’s patrol cruiser.

One of the largest and deepest waterfalls in the United States is Ruby Falls, located near Chattanooga. The 145-foot underground waterfall, named after the wife of excavator Leo Lambert, is located in a cave at the end of the main passage in a large vertical shaft in Lookout Mountain. Ruby Falls features many types of cave formations, including stalactites and stalagmites.

Ruby Falls Cave is a limestone cave that was formed about 200 million years ago when the area was eroded. Caves like this occur when acidic groundwater enters subterranean streams, slowly dissolving the limestone. The stream is 1120 feet underground and is fed by rainwater and natural springs. The water collects in a pool on the cave floor, and continues through to the Tennessee River at the base of Lookout Mountain. 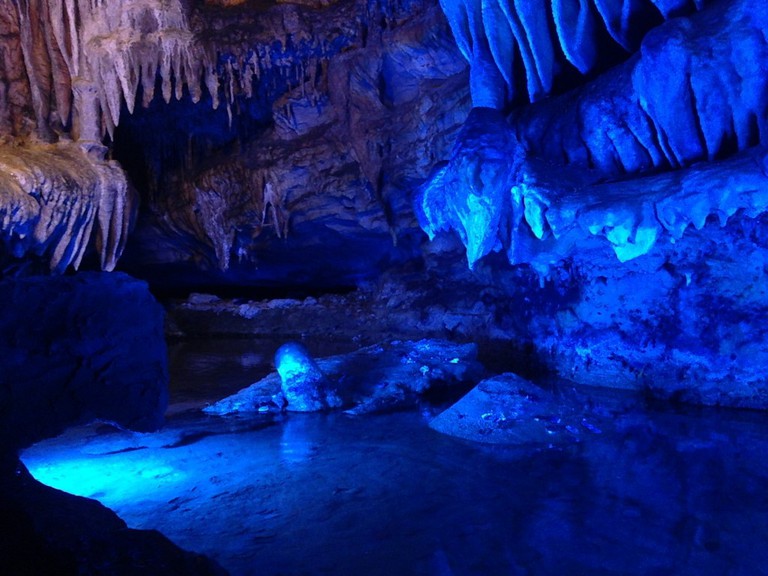 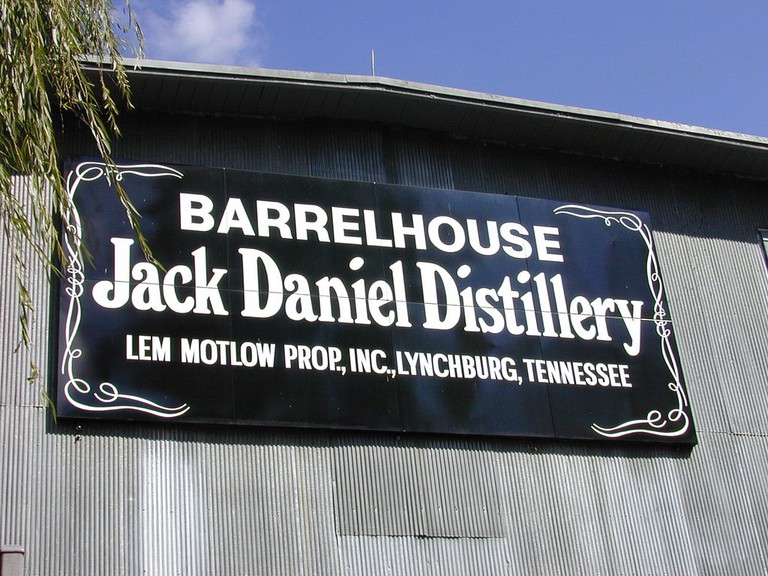 Jack Daniel's Distillery | (c) Ian Hughes / Flickr
Even if for those who don’t drink whiskey, touring Jack Daniel’s Distillery is a fascinating experience. The daily tours at the Lynchburg facility walk visitors through the entire process of how Jack Daniel’s whiskey is made. Tour guides share the both history of the distillery and many interesting facts about Jack and his life. The distillery offers several tour options, ranging in price from $13 for a 30-minute tour, to $75 for a three-hour tour that includes a meal at Miss Mary Bobo’s Boarding House Restaurant. Even though Jack Daniel’s is a whiskey processing facility, it is actually located in a dry county. This means that while visitors can learn about whiskey and even try samples on the tours, alcohol sales are not permitted. , A loophole in this law, however, allows a distillery to sell one commemorative product, regardless of county statutes. The distillery sells the original No. 7 blend in a commemorative bottle and offers free cups of lemonade at the end of its tours.

Every June, Nashville hosts the CMA Music Festival, a four-day live music event. It takes place at three venues downtown; the Music City Center, the Riverfront Park stage, and Nissan Stadium. Top country artists, as well as those who are still making a name for themselves in the country music scene, grace the stages to bring Music City four days of top-notch entertainment. A package must be purchased in advance in order to attend the event; packages have options that include hotel accommodations, as well as meet-and-greet opportunities with the performers. 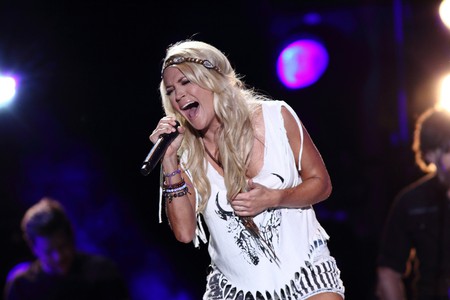 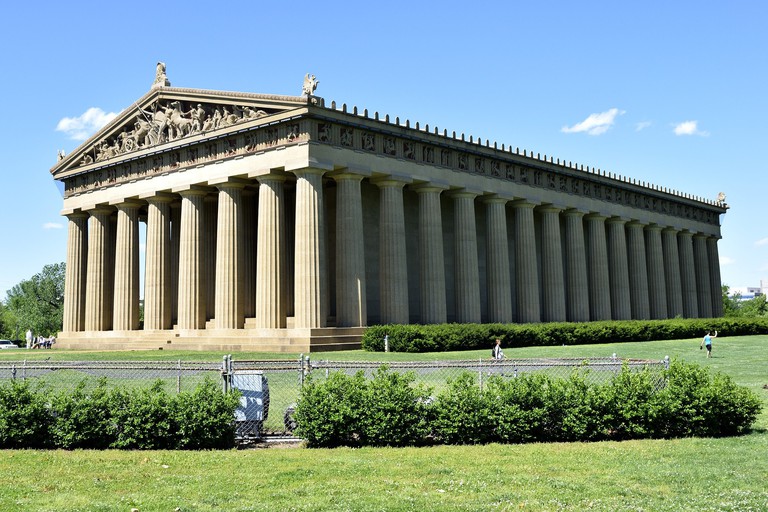 © Paulbr75 / Pixabay
Haven’t been to Greece to see the Parthenon? Experience it on a smaller scale in Nashville. The city has a 42-foot full-scale replica of the Athenian temple in Centennial Park. It was originally built for Tennessee’s 1897 Centennial Exposition and is considered the pinnacle of classical architecture. The plaster replicas of the Parthenon Marbles found in the east room of the main hall are direct casts of the original sculptures, which are currently in the British Museum in London and the Acropolis Museum in Athens. Inside the Parthenon is a collection of 63 paintings by 19th- and 20th-century American artists. These were donated by James M. Cowan and serve as the monument’s permanent art exhibit. Additional space is available for temporary shows and exhibits.

Go to the International Biscuit Festival

Like biscuits? Then be sure to hit the International Biscuit Festival held in Knoxville every year. It began in 2009 by a group of biscuit-lovers who gathered as friends to share their fondness of biscuits. That small gathering evolved into a nationally recognized food festival. Some events include a biscuit baking contest, the Miss or Mister Biscuit Pageant, and the Biscuit Bazaar.

The Southern Food Writing Conference was added to the festival’s schedule in 2012 to bring together southern food authors, chefs, and publishers. 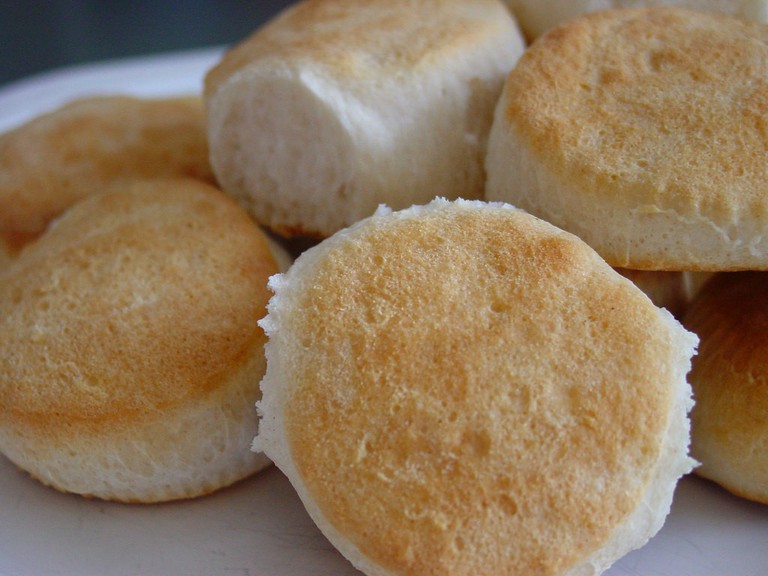