U.S. Open: A Guide To Visiting The Tennis Tournament In NYC

Each year the U.S. Open draws nearly 700,000 spectators to its grounds in Flushing Meadows, N.Y., during the two-week tournament.

Here are some tips when attending the event in order to have a good time without any hassle.

School may have started or is starting soon, but the summer sun is still out. With temperatures expected in the high 70s to low 90s over the course of the tournament, the sun’s rays will still be strong. Sunscreen is crucial, especially if your seats aren’t in the shade.

Reminder, however, aerosol cans aren’t allowed, so leave the spray sunscreen at home and bring an ol’ fashioned bottle of the pastey white lotion. (Kudos to security though, who passed around the confiscated aerosol sunscreen cans to those who could use it before entering the grounds).

As much as you don’t want a sunburn, you also don’t want dehydration. Water is key. Fans are allowed to bring reusable water bottles and fill them up for free at the countless water fountains throughout the grounds. Bottles of water are $5 or more if you forget to bring your own.

Unless you plan on setting up camp at your assigned seat(s) at Arthur Ashe Stadium all day long and not seeing any other courts then you’re going to be on the move. Sure sandals might be the cool, casual things to wear, but you’re going to be on your feet a lot, so wear comfortable shoes.

Piggybacking off the aforementioned tip, be sure to wander around as much as possible. Yes, the biggest stars are confined to Arthur Ashe Stadium or Louis Armstrong Stadium, but walk around and check out the unnamed courts for a more intimate tennis viewing experience. The big names may not be taking to Court 6, for example, but you can get up close at the practice courts to players like Rafael Nadal and Serena Williams before they play in the stadiums. 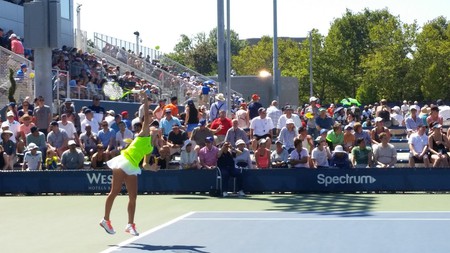 Fans can get a more intimate viewing experience at the unnamed courts. Here is Catherine Bellis serving at Court 6 | © Michael LoRe

Standing in line at the North Gate, a family was astonished to learn selfie sticks weren’t allowed in the grounds. Neither are drones. It doesn’t matter how much they cost, they will be confiscated.

Here is a pretty easy-to-read and elaborate list of what is and isn’t permitted.

In case you don’t read up beforehand, there are countless signs before the security gates with photos of what you can bring in. Oh, backpacks aren’t allowed either, so leave the $80 Under Armour knapsack at home. Drawstring bags and clear bags are permitted and preferred.

Just because you’re going to a tennis tournament doesn’t mean you need to carry your racket around or wear wristbands. Do you walk into an NFL stadium with a helmet and shoulder pads on? Didn’t think so.

With that being said, be smart about what you wear. You’ll be outside in the sun for an extended period of time. Shorts and a T-shirt or polo is the way to go. Think light colors, too. Don’t sweat to death in a hoodie, though you may need long sleeves at the night sessions on cooler nights. Hats and sunglasses are easy ways to combat the sun, too.