The Power Of Filipino Expressionism: Artists Interpret The Marcos Dictatorship

The dictatorship of Ferdinand Marcos dominated Filipino cultural life for almost two decades, and left a lasting imprint on artistic practice in the Philippines. This influence is explored in the Triumph of Philippine Art exhibition, which as Bansie Vasvani discovers, reveals the many diverse ways in which artists respond to political repression.

The Triumph of Philippine Art exhibition (September 21 – December 15 2013) on view at the George Segal Gallery in Montclair State University, New Jersey, focuses on art created during and after the period from 1972 until 1986 when Ferdinand Marcos declared martial law in the Philippines. Nearly 300 years after Spanish colonization, and several decades after the 46 years of American occupation, this independent archipelago of 7000 islands was dominated once again, but this time, by one of their very own. What transpired was years of trauma and mayhem that completely altered the course of artistic expression. The curator M. Teresa Lapid Rodriquez chose eighteen artists who collectively express a consciousness of outrage and urgency through their use of figurative expressionism. 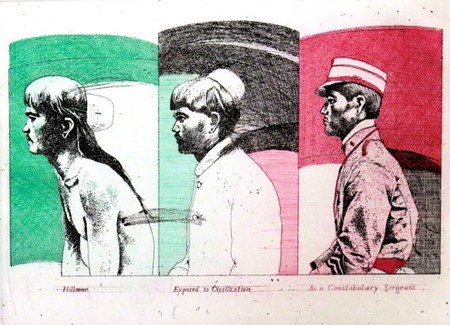 Ben Cabrera, From Hangman to Sergeant | Courtesy of the Artist

Since silence and secrecy are often the first line of defense for perpetrators, Ben Cabrera’s works of the 1970s are a valiant gesture towards overcoming feelings of muteness and numbness during this time. Expressing solidarity with his fellow artists, Cabrera’s carefully rendered 3-color plate etching From Hillman to Sergeant, 1978, shows the gradual transformation of a peasant into a soldier who becomes a cog in the Marcos wheel of despotism. The double entendre intended through the bottom half of the soldier’s face that resembles Marco’s chin line is not lost on the discerning viewer. 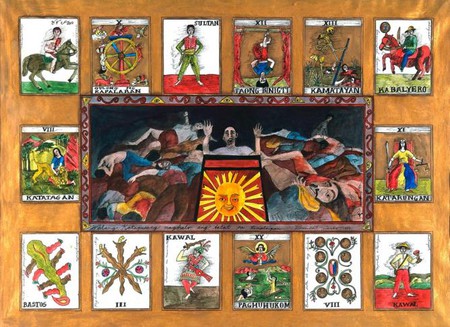 Many women artists not only registered the trauma of their experiences but also the abysmal plight of women’s oppression. Brenda Fajardo co-founded a feminist group with Imelda Cajipe Endaya called ‘Kasibulan’, meaning germination. Through the tarot cards that cover her canvas, Fajardo’s Tarot Card Series of the 1980s portray powerful, queenly women depicted in the ancient, harmonious Filipino world of ‘Babaylan’. Here the rhetoric of the artist gets past the pitfalls of representation to empower the women in the painting. Endaya’s concerns on the other hand are rooted in daily problems of living and coping. Her realistic portraits of women in thatched homes made from ‘sawali’—actual bamboo strips used by the locals—convey a tangible sense of despair. 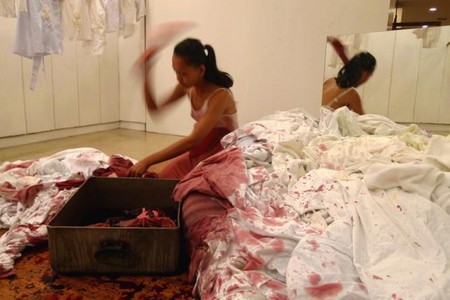 If traumatic disorder is evident through distorted memory, Racquel De Loyola’s powerful video installation of her performance presents horrific memories of tyranny. In Blemish, 2009, blood splatters everywhere as the artist pounds heaps of white laundry with a cleansing wooden stick. Rinsed garments flow with blood instead of clean water as names of innocent victims are called out. Displayed through a small cut out in the chest region of a t-shirt, this highly symbolic video has a profound impact. Loyola’s work communicates the ruling party’s blatant disconnection with the masses through her painfully subjective retelling of history. 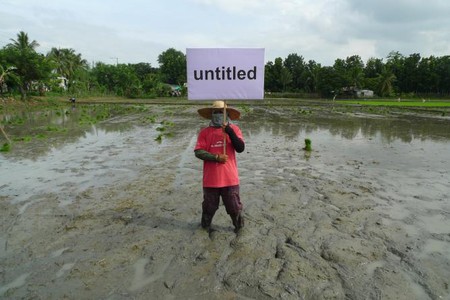 Mideo Cruz’s photography collection Untitled, 2012, depict a group of farmers standing in a field holding a sign that reads ‘untitled’. The lifelong struggle of farmers indentured to agricultural land owned by powerful families is related through this forceful word. It seems as if for Cruz it is important that the role of the representer and the represented are intertwined such that it propels the notion of solidarity between the farmers, the artist, and the viewer. Similarly, Buen Calubayan’s Eternal Landscape, 2010-13, which is made up of fifty feet of sketchy, graphite landscape drawing on toilet paper, showcases the fragility and irrelevance of agrarian problems in the Philippines.

Ultimately the triumph of the exhibition lies in the potency of the figurative works conceived to express each artist’s individuality and subjective approach. Much like Gregory Raymond Halili’s beautifully painted eyes titled Sorrow, 2013, on mother of pearl, the works are able to impart a strong message without being maudlin or over dramatic and attest to the notion that art alone can live up to the task of reflecting contemporary life.